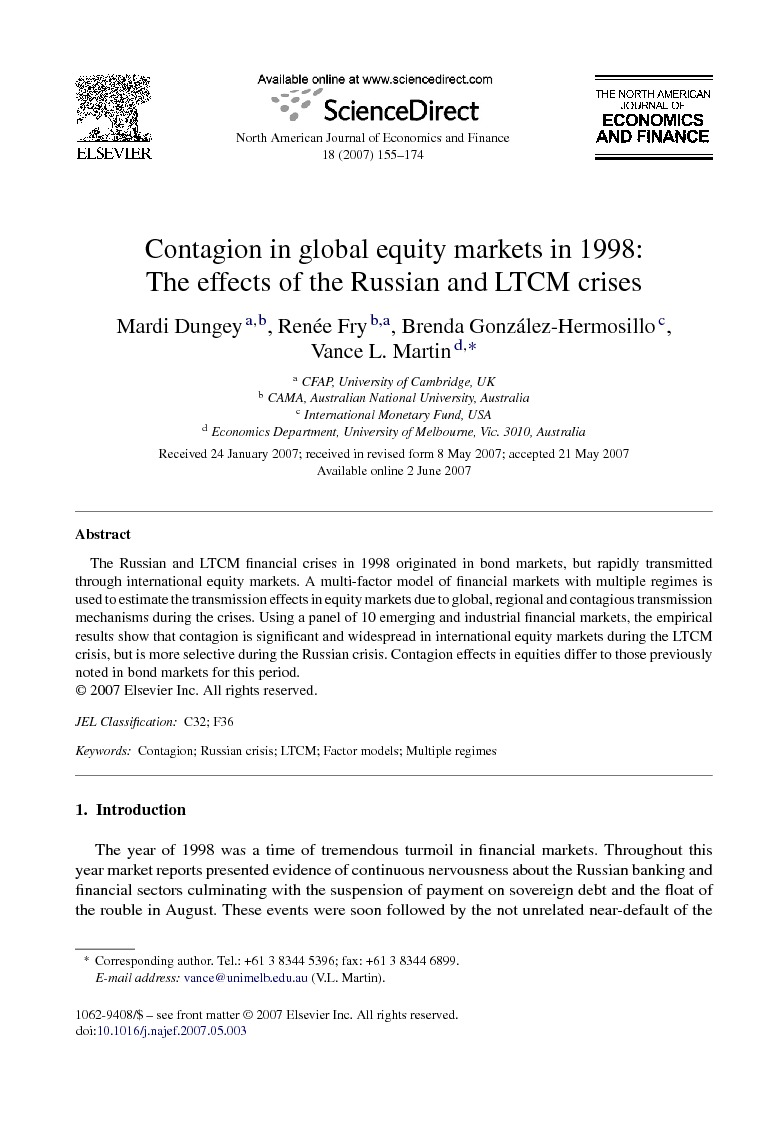 The Russian and LTCM financial crises in 1998 originated in bond markets, but rapidly transmitted through international equity markets. A multi-factor model of financial markets with multiple regimes is used to estimate the transmission effects in equity markets due to global, regional and contagious transmission mechanisms during the crises. Using a panel of 10 emerging and industrial financial markets, the empirical results show that contagion is significant and widespread in international equity markets during the LTCM crisis, but is more selective during the Russian crisis. Contagion effects in equities differ to those previously noted in bond markets for this period.

The year of 1998 was a time of tremendous turmoil in financial markets. Throughout this year market reports presented evidence of continuous nervousness about the Russian banking and financial sectors culminating with the suspension of payment on sovereign debt and the float of the rouble in August. These events were soon followed by the not unrelated near-default of the US hedge fund Long Term Capital Management (LTCM). The shocks during this period had far reaching effects on global financial markets and to some observers the period represented the worst turbulence in international financial markets that had occurred in the past decades Committee on the Global Financial System, 1999 and Upper, 2001. While the primary shocks in the Russian and LTCM crises began in bond markets, their repercussions were felt throughout the financial sector, and much volatility appeared in international equity markets. This paper looks at the transmission of crises during 1998 in international equity markets and finds results which differ substantially to those for international bond markets. In equity markets the majority of the transmission of the shocks across international borders is attributable to contagion effects whereas in bond markets contagion effects are relatively small, although in both cases contagion effects are significant. The empirical results also show that the most influential source of contagion effects differs across the two asset types during this period: the majority of the contagion effects in equity markets are sourced through the US equity market, while in bond markets contagion is primarily associated with events in Russia (Dungey, Fry, González-Hermosillo, & Martin, 2006). The importance of the US market in distributing equity market shocks supports the hypothesis of Kaminsky and Reinhart (2003) that large markets act as centres in distributing shocks to the periphery markets. The empirical results of this paper contribute to the existing literature that focusses on the role of equity markets in acting as a conduit during the Russian bond crisis and the LTCM near collapse, by adopting a more general model that looks at a range of factors linking both industrial and emerging equity markets during the financial crises of 1998. The earlier work of the Committee on the Global Financial System (1999) focusses on industrial countries, whereas, Rigobon (2003) and Hernandéz and Valdés (2001) concentrate on emerging markets. More recently, Kaminsky and Reinhart (2003) look at the interrelationships between industrial and emerging markets, while Baig and Goldfajn (2001) specifically focus on the transmissions to Brazil. The effects of the Russian and LTCM shocks on international bond markets are studied by Dungey et al. (2006), Jorion (2000) and the Committee on the Global Financial System (1999). To identify the linkages across international equity markets during financial crises, a factor model is developed that extends the international capital asset pricing model of Solnik (1974) and the multi-factor extensions proposed by King, Sentana, and Wadhwani (1994). A feature of the model is that it allows for not only common and regional factors but also for contagion; see Dornbusch, Park, and Claessens (2000) and Pericoli and Sbracia (2003) for a review of definitions of contagion. An important theoretical extension over these earlier models is the identification of contagion through multiple regime shifts in the factor structures. The approach represents a multivariate extension of the correlation change test of Forbes and Rigobon (2002), and is also related to the recent contagion tests proposed by Favero and Giavazzi (2002) based on threshold models. The remainder of this paper is organized as follows. A multi-regime factor model of financial crises is specified in Section 2. A number of preliminary empirical issues are discussed in Section 3, including data filtering, identification of equity market shocks, and estimation strategies. The main empirical results are presented in Section 4, while Section 5 contains some concluding comments and suggestions for future research.

This paper has provided a framework for modelling the transmission of contagion in international equity markets during the complex period of the Russian bond default and the LTCM crisis in 1998. The model was based on extending the existing class of latent factor models commonly adopted in finance by allowing for additional transmission mechanisms between global equity markets during periods of financial crises arising from contagion. Contagion was identified as the impact of shocks from either Russia or the US on global equity markets, having conditioned on both world and regional factors, as well as country specific shocks in equity markets. A property of the model was that the volatility of equity returns could be decomposed in terms of the underlying factors, thereby providing a measure of the relative strength of contagion. A number of hypothesis tests of contagion and structural breaks were also carried out. The model was applied to 10 equity markets consisting of four developed markets, and six emerging markets from three regions (Latin America, Asia, and Eastern Europe), using daily equity returns over 1998. A GMM estimator which matched the theoretical moments of the factor model with the empirical moments of the data across regimes, was presented. The key result of the paper was that contagion was significant and widespread to a variety of international equity markets during the LTCM crisis, with the effects of contagion being strongest on the industrial markets and the geographically close Latin American markets. The contagion transmission mechanisms emanating from the Russian equity market tended to be more selective during the Russian crisis, but nonetheless still impacted upon both emerging and industrial equity markets. Moreover, rather than the Russian crisis being seen as an emerging market phenomenon, as suggested by the Committee on the Global Financial System (1999, pp.7–8), contagion from Russia was found to be more statistically significant in industrial countries than in emerging markets. In related work on contagion during the Russian and LTCM crises, Dungey et al. (2006) found that contagion in bond markets also affected a wide variety of economies. The combination of the results from that paper and the current one suggest that it would be informative to construct a more general model of asset markets, combining both bonds and equities to test the importance of contagious transmission mechanisms between markets across international borders. A step in this direction, for different case studies, has been recently undertaken in Ehrmann, Fratzscher, and Rigobon (2005), while Granger, Huang, and Yang (2000) and Hartmann, Straetmans, and de Vries (2004) focussed on bivariate relationships between asset markets during financial crises. An important feature of the proposed model is the specification of a multiple regime model to allow for multiple crises. This suggests that the framework could be applied to model several crises simultaneously by extending the sample period adopted in the current application. By extending the sample period backwards to include 1997 would enable the Asian financial crisis to be modelled, while extending the sample period forwards would enable the Brazilian crisis of 1999 to be modelled for example. This latter extension is particularly interesting given the empirical results presented here, as Brazil was the next country to experience a financial crisis in January 1999. Moreover, Brazilian financial markets seem to have experienced several hits from the Russian and LTCM crises during 1998: the Brazilian bond market was impacted by the Russian crisis Baig and Goldfajn, 2001 and Dungey et al., 2006 and the equity market by the LTCM near-collapse as shown here.