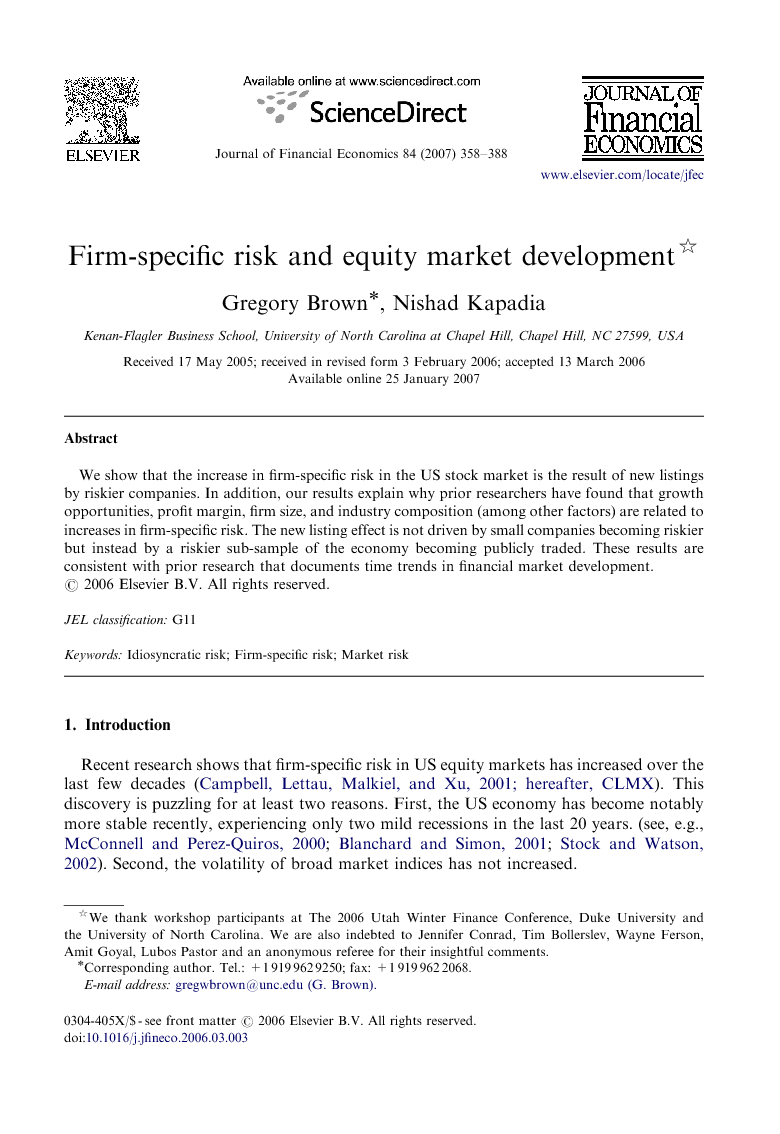 We show that the increase in firm-specific risk in the US stock market is the result of new listings by riskier companies. In addition, our results explain why prior researchers have found that growth opportunities, profit margin, firm size, and industry composition (among other factors) are related to increases in firm-specific risk. The new listing effect is not driven by small companies becoming riskier but instead by a riskier sub-sample of the economy becoming publicly traded. These results are consistent with prior research that documents time trends in financial market development.

The primary result in this paper is to show that the previously documented increase in idiosyncratic risk in the post-war era is the result of the new listing effect: Firms that list later in the sample have persistently higher idiosyncratic volatility than firms that list earlier. Furthermore, firms that list in any given decade do not display a time trend in idiosyncratic volatility. The importance of listing groups in explaining the time trend remains when we also control for other factors (such as firm size, profit margin, and growth options) that have been proposed by prior research as explanations for the increase in idiosyncratic volatility. Instead, we find that a firm's listing group also explains the trends in these variables. Overall, we show that this increase in firm risk is actually a sampling problem. Economy-wide firm-specific risks (like firm survival rates and average profitability) have not changed, while at the same time risk measures for the typical listed firm have increased. In essence, our findings do not necessarily refute the findings of prior research but instead provide a unifying explanation. As an illustration, suppose it is observed that the average age of the people in a swimming pool declines. Some people note that the average weight has gone down, others note that the average height has gone down. These are both potentially important and valid observations, but our analysis is akin to pointing out that the change in age is due to a bunch of kids jumping in. It is both a necessary and sufficient explanation for understanding the noted phenomenon (as well as the other observations). In our analysis, we also explore the link between the time series of average idiosyncratic volatility and financial market development. In particular, the time series of idiosyncratic volatility displays the same U-shape pattern as measures of financial market development shown by Rajan and Zingales (2003) between 1929 and 2004. We show that, in the post-war era, the increase in idiosyncratic volatility is concentrated in the part of the economy that has been able to access the public equity market because of greater financial market development. To conclude, the contribution of this paper can be seen as bringing to light inter-linkages between four recent results in financial economics: (1) CLMX who show that average idiosyncratic volatility has increased over time; (2) Fama and French (2004), who show that newly listed companies have riskier fundamentals; (3) Rajan and Zingales (2003), who examine financial market development; and (4) Morck, Yeung, and Yu (2000), who show that stock-price synchronicity is linked to per capita GDP and investor protection.