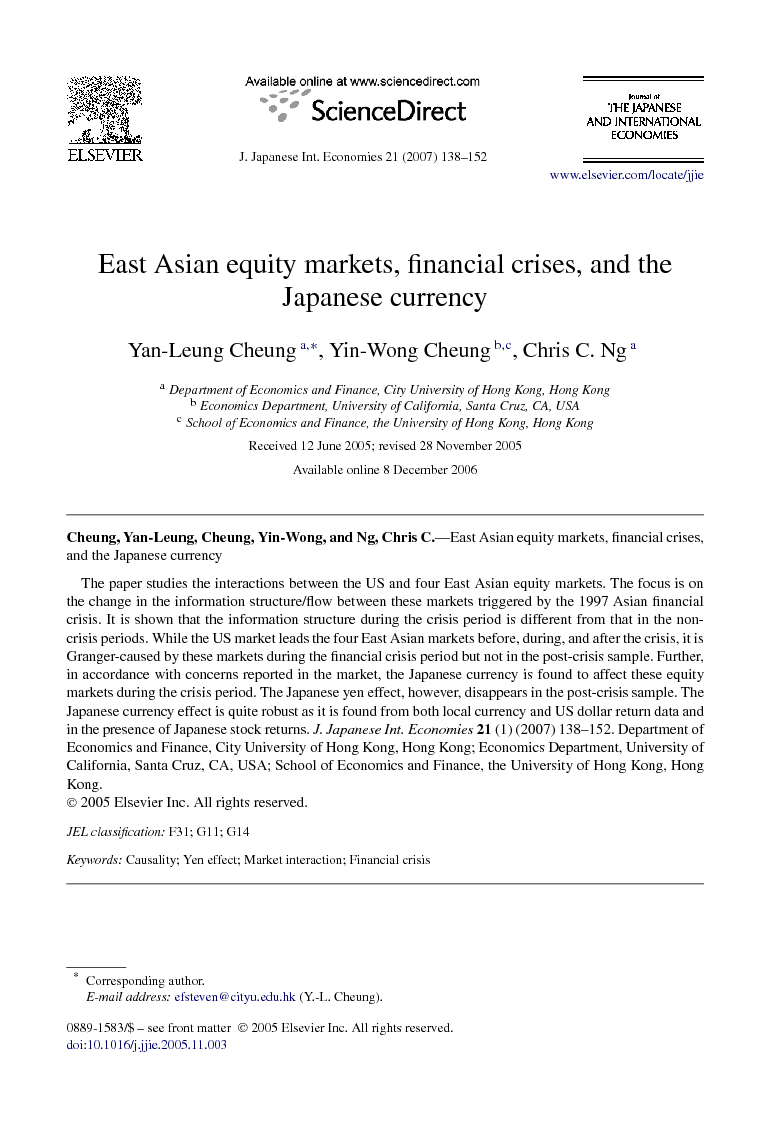 The paper studies the interactions between the US and four East Asian equity markets. The focus is on the change in the information structure/flow between these markets triggered by the 1997 Asian financial crisis. It is shown that the information structure during the crisis period is different from that in the non-crisis periods. While the US market leads the four East Asian markets before, during, and after the crisis, it is Granger-caused by these markets during the financial crisis period but not in the post-crisis sample. Further, in accordance with concerns reported in the market, the Japanese currency is found to affect these equity markets during the crisis period. The Japanese yen effect, however, disappears in the post-crisis sample. The Japanese currency effect is quite robust as it is found from both local currency and US dollar return data and in the presence of Japanese stock returns. J. Japanese Int. Economies21 (1) (2007) 138–152.

The paper presents an empirical study on the interactions between the US and four East Asian markets. The main empirical insights are the changes in the information structure/flow and in the role of the Japanese yen around the 1997 Asian financial crisis. The results are not contaminated by conditional heteroskedasticity because our testing procedure explicitly accounts for GARCH effects in the data. Our results document that the information structure during the crisis period is different from the non-crisis periods. The empirical evidence confirms the dominant role of the US market—the US index leads these East Asian markets before, during, and after the crisis. The influence of these East Asian markets on the US, however, is mainly found during the crisis. Specifically, in the post-crisis sample these markets do not affect the US market. An interesting result is the effect of the Japanese currency. While the reported yen effect on equity markets corroborates with the finding that fluctuations in dollar–yen affect the East Asian economies (McKinnon and Schnabl, 2003), we find that the yen effect is subsample specific. Consistent with concerns reported in the market, the Japanese currency is found to affect these equity markets only during the crisis period but not in the post-crisis sample. The Japanese yen effect does not appear spurious. The same currency effect is uncovered from both local currency and US dollar return data and is detected in the presence of the Japanese stock return variable. The results are suggestive of exchange rate risk is not overwhelmingly important under normal market conditions possibly because the risk can be hedged in the forward market. On the other hand, Japanese yen volatility appears a risk factor during the Asian crisis that is priced in the equity market. The findings corroborate the contention that financial crises endure extreme market conditions. These extreme market conditions can lead to changes in the channel via which information is incorporated and transmitted across markets. Policymakers, practitioners and researchers are aware of the interaction between equity markets. However, the nature and extent of market interaction are not very well understood. Our results on the change in information flows have some interesting implications. For policymakers, our results suggest that measures to stabilize and insulate the domestic market for external influences have to account for possible changes in the pattern and strengthen of market interdependence. Specifically, a measure that is effective during the tranquil market condition may not deliver the expected results in a turmoil and crisis period. For practitioners, information on market interactions helps improve hedging and managing portfolios that contain foreign equities. The documented changes in the causal relationship suggest that different investment strategies should be pursued under different market conditions. Further, if changes are not allowed for, the use of long sample data may yield obscure and even erroneous information on market interactions. For researchers, the reported varying causation pattern warrants a detailed study on information flow and propagation mechanisms under different market conditions. The upsurge and disappearance of the Japanese yen effect is an intriguing phenomenon. In addition to the usual question of what are the economic variables that help us understand the interactions between equity markets, one has to ask: “What are the factors that trigger the currency effect and through what channels the currency affects the equity market interdependence?” The channel and transmission mechanism with which the yen exchange rate affects the East Asian economies is an interesting future research area.