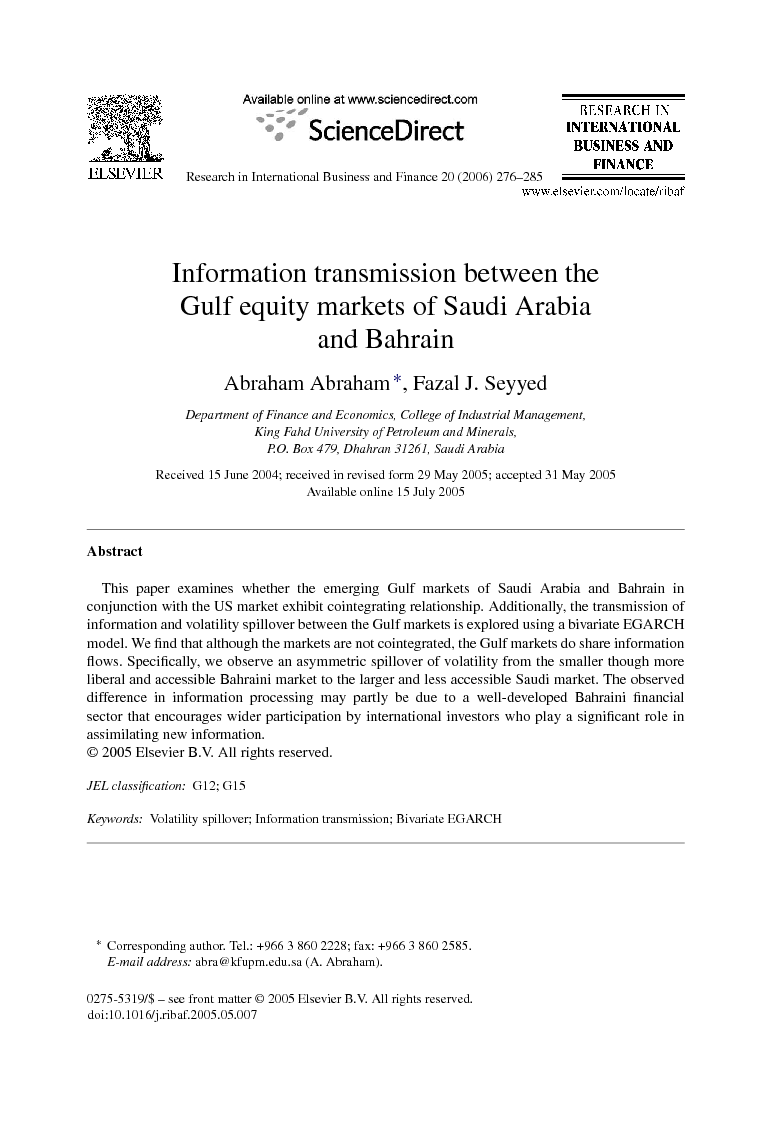 This paper examines whether the emerging Gulf markets of Saudi Arabia and Bahrain in conjunction with the US market exhibit cointegrating relationship. Additionally, the transmission of information and volatility spillover between the Gulf markets is explored using a bivariate EGARCH model. We find that although the markets are not cointegrated, the Gulf markets do share information flows. Specifically, we observe an asymmetric spillover of volatility from the smaller though more liberal and accessible Bahraini market to the larger and less accessible Saudi market. The observed difference in information processing may partly be due to a well-developed Bahraini financial sector that encourages wider participation by international investors who play a significant role in assimilating new information.

The strengthening of regional linkages both economic and financial in today's global village is apparent even to the most casual observer. The temporal dependence amongst stock markets that these linkages imply is of crucial importance to financial market participants. A compelling example of such integration was seen in the events following the so-called Asian crisis, in terms of the rapid flow of information and the effects it had on major financial centers around the world. The extent of cross-market integration is also important to fund and money managers, as it impacts potential diversification benefits from investing internationally. Although a considerable amount of research has been devoted to assessing the integration of well-developed stock markets, less attention has been given to smaller emerging market. This paper examines the interrelationship between two equity markets in the Gulf region of the Middle East—Saudi Arabia and Bahrain, and their common linkage with the US stock market. Two main issues are pursued in this paper. First, we determine whether the Saudi and Bahraini equity markets are cointegrated with the US market and then ascertain the direction of causality. Second, we examine whether the volatility changes in one market are transmitted to the other market and the direction of information flow. Much empirical work on the international transmission of information during the last decade has focused on the three developed markets of US, Japan, and UK. Hamao et al. (1990) report significant volatility spillovers from New York to London and Tokyo. Motivated by the simultaneous fall of markets during the crash of October 1987, King and Wadhwani (1990) model and test a contagion model where failure in one market is transmitted to other markets. They show that an increase in volatility leads to greater contagion, implying that volatility shifts can be self sustaining. In a similar vein, Lo and Mackinlay (1990), Mcqueen et al. (1996), and Reyes (2001), amongst others, look at intra market information and volatility links, in particular between large and small cap stocks, and various size based portfolios. Some evidence of interdependence among the developed and relatively smaller and less active Pacific-Basin markets is provided by Liu et al. (1998) and Liu and Pan (1997). Booth et al. (1997) report volatility spillovers between the Danish, Norwegian, Swedish, and Finnish stock markets. Smaller regional markets, in particular, the Gulf stock markets have not received much attention. The nature of these markets in terms of their unique organization, trading patterns, liquidity, and other parameters could potentially imply very different transmission mechanisms than those in the developed markets. This paper attempts to fill this gap in literature by examining the volatility and mean spillover between the dominant market in the region, Saudi Arabia, and the smaller neighboring market of Bahrain. Given the significance of US equity markets, it is likely to play a dominant role in providing information and influencing other markets around the globe. For this reason, we include the US equity market (represented by S&P 500) in addition to the two regional markets of Bahrain and Saudi Arabia in our study. The rest of the paper is organized as follows. Section 2 provides an overview of the Gulf equity markets of Saudi Arabia and Bahrain and describes the data used in the analysis. Section 3 presents the statistical methodology. Section 4 outlines the empirical results. Section 5 presents the conclusions.

This study examines the extent to which the two emerging markets in the Middle East, Bahrain, and Saudi Arabia are integrated and provides insights into the transmission of information between these markets. Results from a cointegration analysis show that there is no long-run equilibrium relationship between the two markets. The Saudi market is an oil based economy driven predominantly by oil prices, while Bahrain is a trading economy which in the last decade has evolved into a financial services hub in the region. The absence of a long-run equilibrium across the two markets is therefore not too surprising. Results from a bivariate conditional volatility model shows that there is an asymmetric flow of information from the smaller Bahraini market to the larger Saudi market. The conditional volatility in the Saudi market is significantly affected by innovations or shocks in the Bahraini market. The observed differential flow of information may be due to a well-developed Bahraini financial services sector that encourages wider participation and access to sophisticated international investors who play a significant role in processing and assimilation of new information. Results presented here suggest that individual and professional investors making asset allocation decisions in the two Gulf markets can potentially take advantage of this asymmetric impact of information on volatility. From a policy perspective, it appears that the ability of a market to process information is affected among other factors by its accessibility, organization, and trading practices.