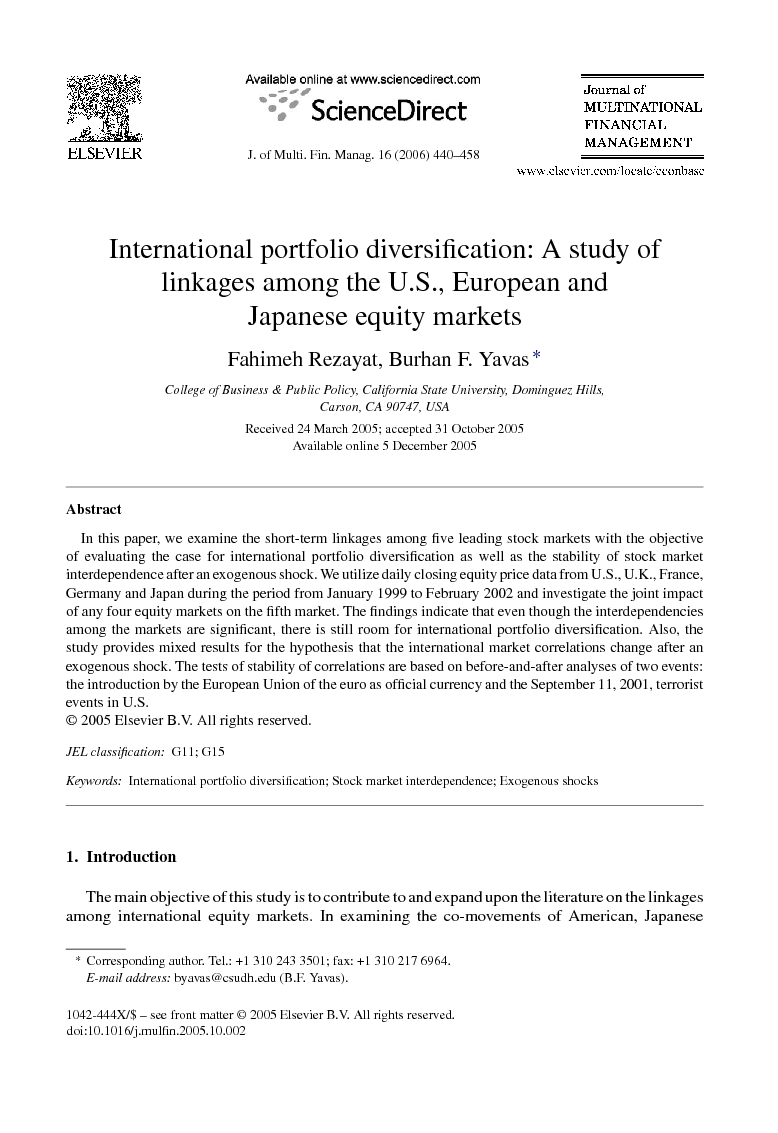 In this paper, we examine the short-term linkages among five leading stock markets with the objective of evaluating the case for international portfolio diversification as well as the stability of stock market interdependence after an exogenous shock. We utilize daily closing equity price data from U.S., U.K., France, Germany and Japan during the period from January 1999 to February 2002 and investigate the joint impact of any four equity markets on the fifth market. The findings indicate that even though the interdependencies among the markets are significant, there is still room for international portfolio diversification. Also, the study provides mixed results for the hypothesis that the international market correlations change after an exogenous shock. The tests of stability of correlations are based on before-and-after analyses of two events: the introduction by the European Union of the euro as official currency and the September 11, 2001, terrorist events in U.S.

The main objective of this study is to contribute to and expand upon the literature on the linkages among international equity markets. In examining the co-movements of American, Japanese and European (U.K., France and Germany) equity markets, we seek to identify diversification opportunities for international investors and investigate the stability of the relationships among the markets. The originality of this paper stems from two sources: (1) its use of data as three-month moving segments in calculating moving correlations and (2) the utilization of the multivariate-auto-regressive-moving average (MARMA) models in identifying the inter-market linkages to test the hypotheses previously advanced in the international finance literature. Two well-known theories in the Finance literature, the Capital Asset Pricing Model (CAPM) and the Modern Portfolio Theory, suggest that individual and institutional investors should hold a well-diversified portfolio. While mutual funds offer quick and relatively inexpensive ways of diversification, there is yet another way to diversify investment portfolios. It is argued that since differences exist in levels of economic growth and timing of business cycles among various countries, international portfolio diversification can be used as a vehicle to reduce risk. In fact, the 1990s witnessed an explosion of international portfolio investment. Mutual fund companies such as Janus and Templeton achieved phenomenal rates of return on their investments, particularly in emerging markets. National economies have recently become more closely linked, not only because of growing international trade and investment flows, but also in terms of international financial transactions. Influences contributing to an increased general level of correlation among markets and markets integration include the following: (1) the development of global and multinational companies and organizations; (2) advances in information technology; (3) deregulation of the financial systems of the major industrialized countries; (4) explosive growth in international capital flows; (5) the abolishment of foreign exchange controls (Bracker and Koch, 1999). While some controversy exists among investment professionals regarding the benefits and costs of international portfolio investment, there is agreement that international equity portfolio diversification recommendation is based on the existence of a low correlation among national stock markets. Specifically, previous studies have shown that international diversification allows for reduced total risk without sacrificing expected returns (Cosset and Suret, 1995). These findings are a direct result of the conclusion that the stock returns display much higher positive correlation within a country than across countries. On the other hand, if it is true as some recent studies have shown that cross-country correlation is increasing due perhaps to the growing interdependence among the international markets, then benefits of international portfolio diversification may be overstated. In the present paper, we aim to shed light on international equity market interdependence by utilizing data from five major equity markets in a three-month moving average format, and seeking to improve upon methodology of previous studies by employing multivariate-auto-regressive-moving average models. In the literature, numerous studies exist that deal with the issue of stock market integration and interdependencies. Madura (2003) finds that correlations markedly increased over time. Longin and Solnik (1995) investigate the behavior of monthly international equity returns over the period 1960–1990 and find that the correlations rise in periods of high market volatility. Solnik et al. (1996) indicate that deregulation and the opening of the British economy to foreign investment was the main reason that the British market became more correlated with the U.S. market. Meric and Meric (1997) study the changes in the co-movements of the 12 European equity markets after the 1987 crash. Their results indicate that the co-movements of these equity markets increased significantly after the crash, implying that the benefits of international diversification decreased considerably after the crash. Ball and Torous (2000), utilizing data from January 1987 to May 1999, also find evidence that the correlations tended to increase in response to higher volatility. Karolyi and Stulz (1996), using the daily returns of U.S. and Japan indices, also find evidence of changing correlation over time. Their study distinguishes between “global” and “competitive” shocks for asset returns. Global shocks are defined as those that affect the value of all firms in the same direction, and competitive shocks as those which increase the market value of all firms in one country relative to firms in another country. Furthermore, Karolyi and Stulz found global shocks to be associated with high return covariances, whereas competitive shocks were associated with low return covariances. They also consider the possibility that a cause of markets’ co-movement could be “markets contagion”. Contagion effects result when enthusiasm (negativity) for stocks in one market brings about enthusiasm (negativity) for stocks in other markets, regardless of the evaluation of market fundamentals. Forbes and Rigobon (1999) test the stock market contagion during the 1997 East Asian crises, the 1994 Mexican Peso collapse and the 1987 U.S. stock market crash. They test a contagion based on both adjusted and unadjusted correlation coefficients. When the researchers use unadjusted correlation coefficients, their findings indicate evidence of contagion in several countries, whereas when they base the tests on the adjusted coefficients, they find virtually no contagion and indicate that during these periods, strong cross-market linkage existed. Rezayat (2002) and Yavas et al. (2004) analyze linkages among the U.S., European and Japanese markets and find that although the correlations among the markets are statistically significant, they are not strong. The above examples from the literature clearly point out that international equity markets are becoming increasingly correlated. The aim of this study is to expand upon the literature using daily data to focus on the short-run linkages among five equity markets (U.S., U.K., Germany, France and Japan). The present study focuses on the trend and fluctuation of cross-correlations among the five markets cited above, using sliced-three-month-moving data. In the next section, we review the sources of data and the methodology, followed by presentation of the analysis and our findings and culminating with our summary and conclusions.

In investigating the short-term co-movements among the Japanese, the U.S and the three European stock markets during 1999–2002, our analysis supported the findings of the existing literature that the co-movements among these markets were significant and varied over time. In particular, we found that the European stock markets were highly interrelated. The Japanese stock market, on the other hand, had almost no significant effect on the movement of the other markets. After calculating unidirectional correlation coefficients and applying MARMA to the resulting data, our results indicated that the S&P 500 had the most marked effect on the Nikkei index, and the European indices had a greater impact on the S&P 500 than the S&P 500 had on the European indices. However, the Nikkei did not have a significant influence on the European indices or on the S&P 500 during this period. Despite the significant interdependencies among the markets studied there appears to be still room for international portfolio diversification. In particular, both European and Japanese investors should consider investing in each others’ markets for effective portfolio diversification. Similarly, American investors can realize diversification benefits in Japan. On the other hand, diversification benefits are minimal for American and European investors who would like to invest exclusively in Europe or in U.S. The events (both anticipated and unanticipated) studied, namely the introduction of the euro as a common currency in the E.U. and the September 11 terrorist attacks, did not have the same effect on the relationship of these five markets. We found interdependencies among the markets to change significantly only in 4 out of 17 cases studied after the introduction of the euro. However, subsequent analyses revealed that changing interdependencies may be due to changes in variances within markets. In the case of the September 11 events, we found that correlations within European markets and between U.K. and U.S. had declined. On the other hand, correlation between Japan and U.S. and Germany and U.S. had increased. While these results indicate that correlations do change following exogenous shocks, it is difficult to predict the direction of the change without a more detailed analysis.