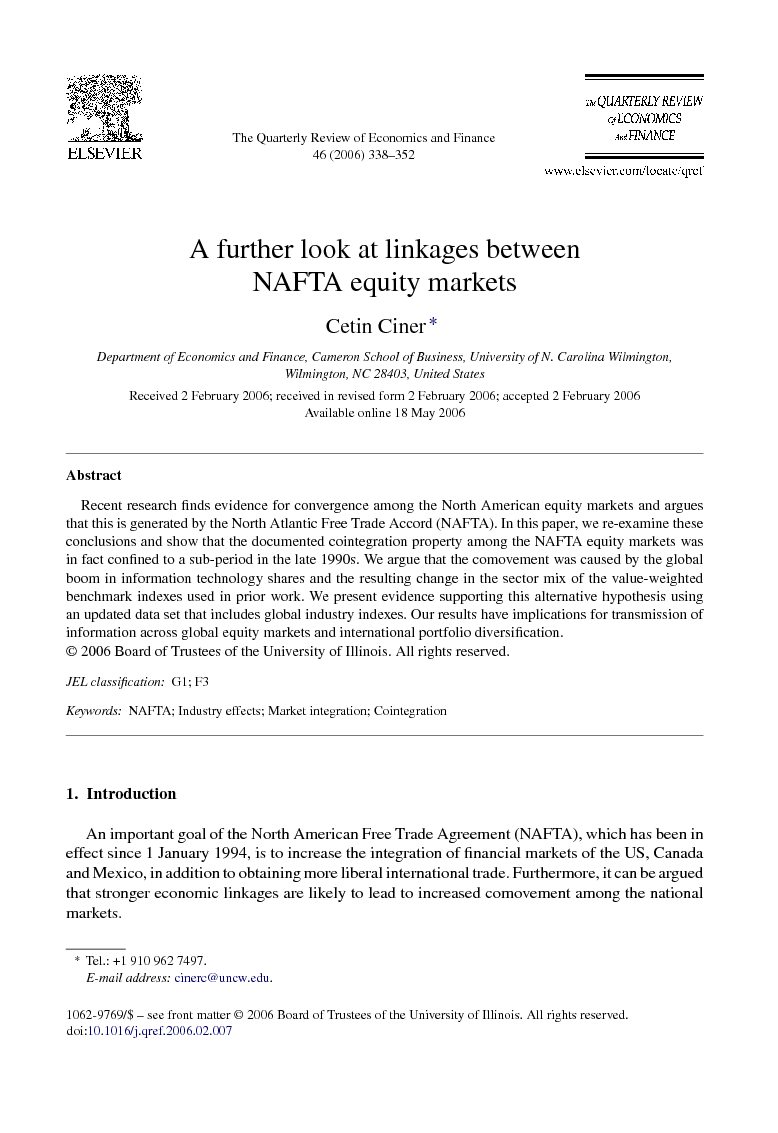 Recent research finds evidence for convergence among the North American equity markets and argues that this is generated by the North Atlantic Free Trade Accord (NAFTA). In this paper, we re-examine these conclusions and show that the documented cointegration property among the NAFTA equity markets was in fact confined to a sub-period in the late 1990s. We argue that the comovement was caused by the global boom in information technology shares and the resulting change in the sector mix of the value-weighted benchmark indexes used in prior work. We present evidence supporting this alternative hypothesis using an updated data set that includes global industry indexes. Our results have implications for transmission of information across global equity markets and international portfolio diversification.

An important goal of the North American Free Trade Agreement (NAFTA), which has been in effect since 1 January 1994, is to increase the integration of financial markets of the US, Canada and Mexico, in addition to obtaining more liberal international trade. Furthermore, it can be argued that stronger economic linkages are likely to lead to increased comovement among the national markets. Building on these motivations, several studies investigate cointegration between the NAFTA equity markets. While prior work by Ewing, Payne, and Sowell (1999) and Atteberry and Swanson (1997) are largely unsupportive, more recent papers by Darrat and Zhong (2005), Aggrawal and Kyaw (2005) and Gilmore and McManus (2004) present evidence for cointegration in the post-NAFTA period. They suggest that the NAFTA accord was instrumental in achieving convergence among the North American equity markets. In addition to providing evidence on the impact of international trade arrangements on equity market linkages, a relatively unexplored topic in international finance, the findings are important for effective global portfolio diversification strategies. Starting with the work of Kasa (1992), many researchers have argued that benefits from international diversification may not materialize if national equity markets move together in the long run.1 Furthermore, the findings imply that, since equity prices could impact monetary policy through the wealth channel, expectations about the stance of interest rates may be linked across the markets. The goal of the present paper is to re-examine the integration of the NAFTA equity markets and its associated implications. Specifically, our working hypothesis is that the observed cointegration among the three stock markets is due primarily to the global equity market boom in the late 1990s, rather than a fundamental integration of the markets resulting from NAFTA as suggested by previous studies. Our main motivation comes from the observation that a market bifurcation became apparent between sectors of the global economy in the second half of the 1990s. Consequently, the weights of the technology and telecommunications sectors reached unprecedented levels in value-weighted indexes used in prior work.2 In fact, we analyze the change through time in relative weights of major industries in aggregate country indexes and show marked increases for technology and telecommunications industries across the NAFTA economies. We argue that global shocks to these sectors generated a comovement among the indexes in the second half of the 1990s. It is noteworthy that our analysis is particularly related to a recent study by Brooks and Del Negro (2004). In a firm-level study, these authors suggest that increased importance of industry factors in international portfolio strategies in the late 1990s was mainly confined to stocks in telecommunications and technology.3 In empirical analysis, we utilize industry level data in addition to country benchmark indexes and also, use observations that cover a more recent time period, specifically between 1994 and 2004. The use of a longer time period allows us to examine market dynamics after the market crash in March 2000 and industry level data are useful to focus on disaggregated dynamics between the economies. We use Johansen's cointegration methods and, consistent with prior work, find that the series exhibit a stable relation between January 1994 and March 2000. However, support for cointegration completely disappears after the market crash and moreover, does not exist in the full sample. We further investigate linkages between the markets, using a relatively new approach by Pascual (2003). He argues that time variation in equity market integration can be measured by examining changes in the speed of adjustment coefficients, which measure the extent of response by individual equity markets to disequilibria in the system. We conduct recursive estimates of the cointegration system and show that the results from this complementary analysis also support the notion that integration has become less pronounced after March 2000. We proceed to investigate industry level data to uncover the driving forces behind the comovement in the second half of the 1990s. We utilize the Dow Jones World Stock Index database for the analysis. The Dow Jones Industry Indexes, introduced in 1993 and used in prior work by Griffin and Karolyi (1998) and Arshanapalli, Doukas, and Lang (1997), provide benchmarks for international investors with coverage in 25 countries and over 80 industry classifications. We include ten industry groups: basic materials, consumer cyclical, consumer non-cyclical, energy, financial, healthcare, industrial, technology, telecommunications and utilities. This disaggregating into ten sectors is likely to capture the main differences across industries. Our industry level analysis supports the hypothesis that the increased integration in the late 1990s was mainly driven by the technology and telecommunications sectors. We detect strong evidence for cointegration in these industry indexes in the pre-crash period, while there is little evidence for a significant long-term relation in the other sectors of the economies. After the market crash, the comovement in the telecommunications and technology indexes disappear, consistent with the lack of cointegration in the benchmark indexes. In the full sample, only consumer industry indexes, both cyclical and non-cyclical, show evidence of cointegration across the NAFTA markets. In the final part of the empirical analysis, we examine common volatility dynamics. Equity markets can be independent in the first moments but still have dependency through the volatility process. We use Engle and Kozicki's (1993) cofeature test to investigate the presence of a common ARCH property between the markets. The results suggest linkages in the volatility processes in the pre-crash period since we find that the Canadian and Mexican benchmark indexes exhibit common volatility. However, the link disappears in the full sample, consistent with earlier findings. In the next section, we briefly review the prior work. The data set and sample summary statistics are presented in Section 3. Section 4 contains an investigation of linkages between country indexes, while Section 5 focuses on linkages at the industry level. Section 6 reports on the common volatility analysis and the final section offers the concluding remarks of the study.

The extent of integration in international equity markets has significant implications for devising optimal portfolio allocation strategies. This issue is also important to assess the state of financial stability under global propagation of shocks as well as for impact of monetary policy as wealth effects might create channels for international transmission of financial decisions. Not surprisingly, a great deal of attention has been directed towards the linkages between international stock markets especially since many examples of significant transmission of shocks across national markets have been reported in the recent popular press. In line with these, numerous studies detect increased comovements among international markets. However, a noteworthy point in empirical work is that it is possible to capture transitory changes in the behavior of markets under global shocks. King and Wadhwani (1990) illustrated this point and argue that increased correlation of financial markets around the crash of 1987 was not of permanent nature. In this paper, we present a similar case and argue that the increased comovement of the North American equity markets in the second half of the 1990s was not due to a permanent change in the relation between the markets generated by the NAFTA, as maintained in previous work by Darrat and Zhong (2005), among others. Rather, it was likely a result of the global boom in information technology stocks in the same period and hence, was temporary in nature. It is noteworthy that our findings are also contradictory to the view that the NAFTA equity market linkages was a result of increased economic uncertainty and financial crises, raised in prior work by Atteberry and Swanson (1997). We report empirical findings to argue that the stable relationship between the benchmark equity indexes has disappeared since the market crash in March 2000. Furthermore, we show that the telecommunications and technology industry indexes were strongly cointegrated in the late 1990s although the linkage between them has disappeared in the latter half of the sample, mimicking the behavior of the aggregate indexes. In fact, consumer goods are the only industry that seems to exhibit a stable long-term relation in the NAFTA context. We also investigate volatility dynamics and report similar results. Common volatility was detected between Mexico and Canada in the post-crash period, while the evidence disappears in the full sample and the US volatility is not linked to the other NAFTA markets. Our results have implications for global investors, financial regulators and policy makers. International portfolio managers have traditionally followed a top–down approach, selecting the country to invest first and then, focusing on the best stock(s) within the country, which implicitly indicates that country-factors are important and distinct. Our findings suggest that this is still the correct approach within the context of the NAFTA economies since country-specific variations appear strong enough to create divergence across the country indexes. Our analysis has implications also for understanding dynamic linkages between equity markets and international trade flows in underlying economies. While it can be argued that increased trade is likely to generate more significant linkages between equity markets, the findings do not seem to support this view in the case of the NAFTA. Considering the move towards trade agreements in various parts of the world, this is likely to be an important issue and could be further considered in future research.