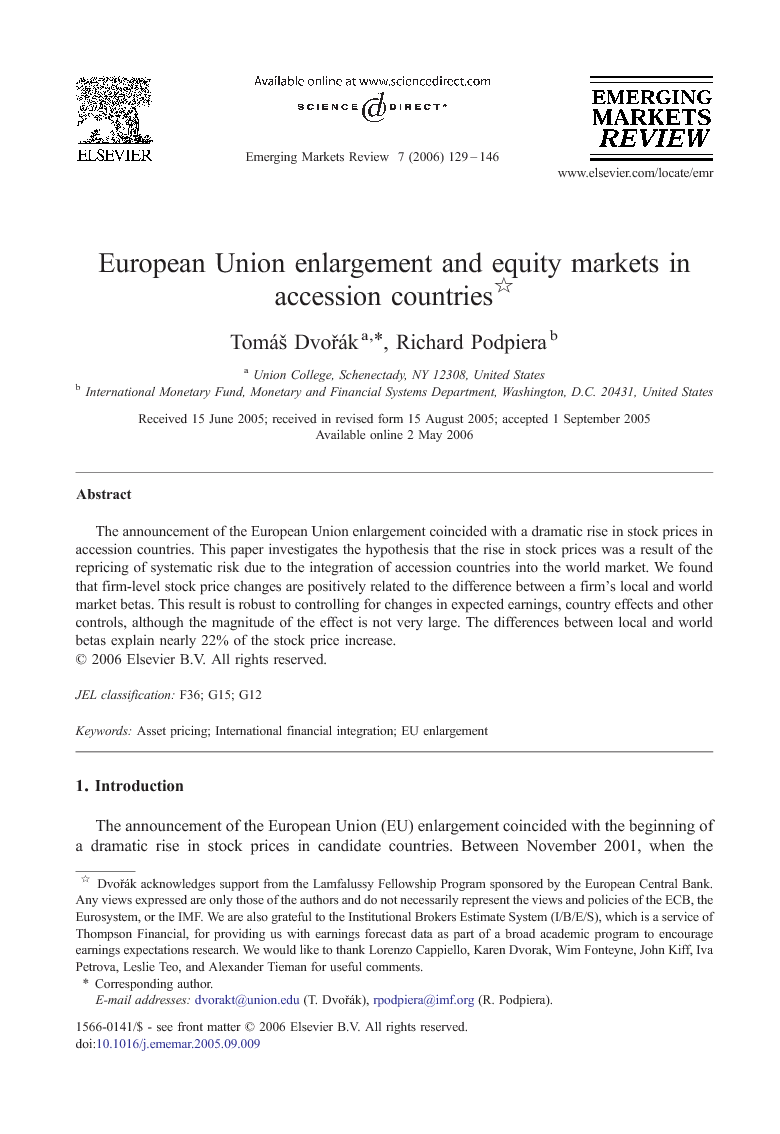 The announcement of the European Union enlargement coincided with a dramatic rise in stock prices in accession countries. This paper investigates the hypothesis that the rise in stock prices was a result of the repricing of systematic risk due to the integration of accession countries into the world market. We found that firm-level stock price changes are positively related to the difference between a firm's local and world market betas. This result is robust to controlling for changes in expected earnings, country effects and other controls, although the magnitude of the effect is not very large. The differences between local and world betas explain nearly 22% of the stock price increase.

This paper examines the hypothesis that the dramatic increase in stock prices in the EU accession countries following the announcement of the EU enlargement was a result of market integration and the subsequent re-pricing of systematic risk. We tested two versions of this hypothesis: one in which integration is associated with a change in the market premium, and one in which the market premium is constant. In the first version, the change in systematic risk is measured by the difference between the covariance of returns with the local market and the covariance of returns with the world market. The differences in local and world covariances do not appear to be related to the changes in stock prices. In the second version, the change in systematic risk is measured by the difference between local and world betas. The evidence suggests that at least part of the stock price increase can be explained by the difference between stocks' local and world betas. Stocks that had high local beta but a low world beta experienced a higher price increase than other stocks. We also test whether the dramatic rise in stock prices is a reflection of an increase in expected earnings. We find that changes in expected earnings are consistently related to changes in stock prices. An upward revision of expected earnings has a positive impact on a firm's stock price. Our finding that a measure of the change in systematic risk explains changes in stock prices is consistent with the findings of Chari and Henry (2004). Changes in systematic risk are followed by proportional changes in stock prices. Unlike Chari and Henry (2004), however, we do not find that the difference in covariances matters, but we do find that the differences in betas are important in explaining stock price changes. Covariances should matter when investors update their estimate of the market premium using historical variances. Since Central and Eastern European markets have limited historical data, investors may not use historical variances to estimate market premia. Instead our results suggest that investors use CAPM mechanically, i.e., discounting future cash flows using local betas prior to the announcement of the EU accession and using world betas after the announcement. We find the significance of the differences in local and world betas for explaining price changes rather striking. This is because as an empirical question, the odds are stacked against finding this effect. First, we have only 74 observations and 12 explanatory variables (including country effects), which leaves few degrees of freedom to estimate the coefficients with precision. Second, we rely on betas calculated using historical data, implicitly assuming that investors consider historical betas as an accurate guide to what betas will be in the future. Given that the countries are undergoing dramatic changes, this may be a strong assumption. In some sense, increased integration itself could bring a change in the structure of the economy and alter the pattern of co-movement of returns. We rely on the assumption that the degree of co-movement of returns is determined in the product markets and that product markets had been integrated well before capital market integration. Thus, capital market integration is not expected to have an effect on covariances or on betas. Finally, estimating the repricing effect is hard because there is considerable uncertainty about the timing of stock market integration. Our findings should give impetus to further integration. This is because capital market integration has the effects predicted by the standard international asset pricing model. Following the announcement of the EU enlargement, investors did re-value firms according to their systematic risk and firms benefit from capital market integration according their capacity to diversify risk for the global investor.