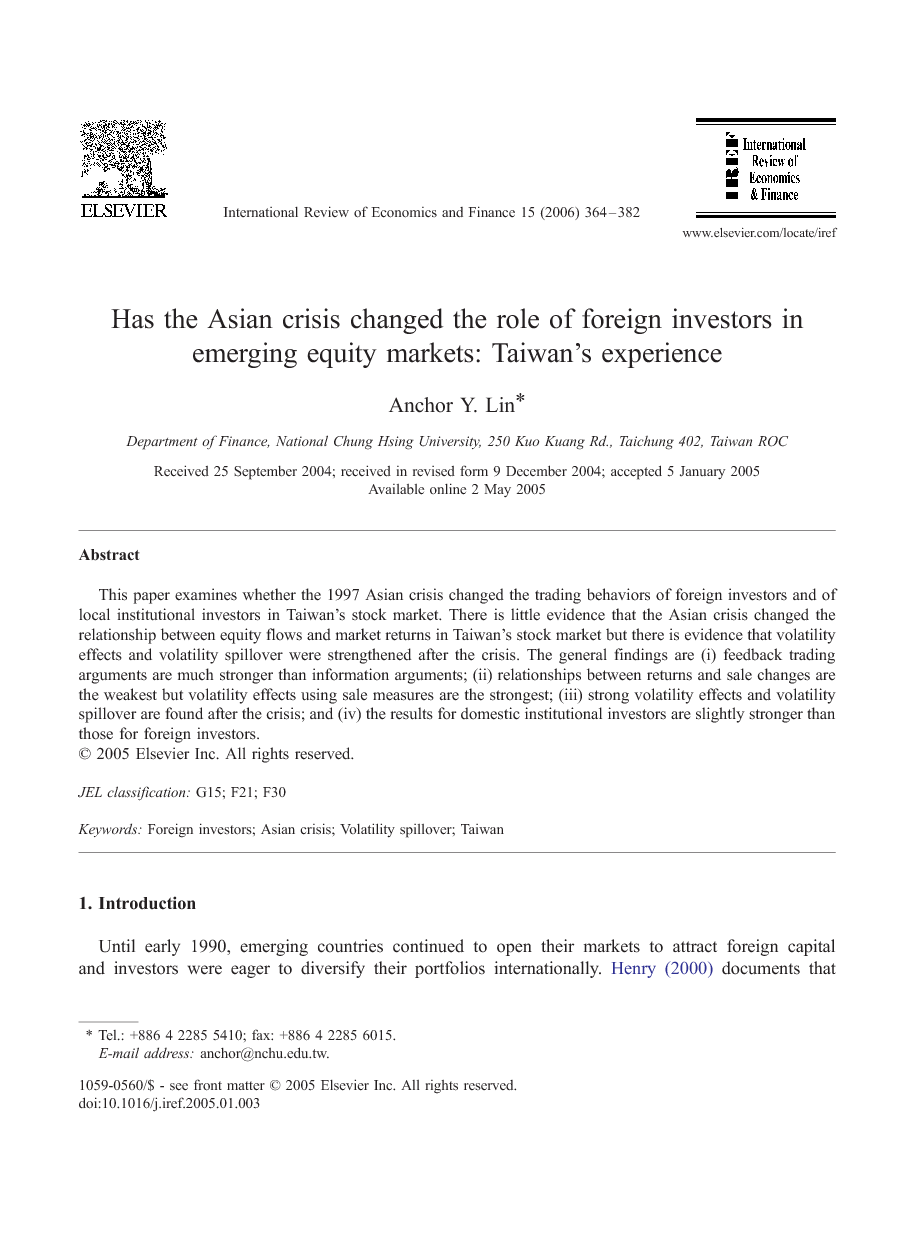 This paper examines whether the 1997 Asian crisis changed the trading behaviors of foreign investors and of local institutional investors in Taiwan's stock market. There is little evidence that the Asian crisis changed the relationship between equity flows and market returns in Taiwan's stock market but there is evidence that volatility effects and volatility spillover were strengthened after the crisis. The general findings are (i) feedback trading arguments are much stronger than information arguments; (ii) relationships between returns and sale changes are the weakest but volatility effects using sale measures are the strongest; (iii) strong volatility effects and volatility spillover are found after the crisis; and (iv) the results for domestic institutional investors are slightly stronger than those for foreign investors.

Until early 1990, emerging countries continued to open their markets to attract foreign capital and investors were eager to diversify their portfolios internationally. Henry (2000) documents that financial market liberalizations attract foreign investment, which facilitates risk sharing among foreigners and local investors and reduces the cost of capital in the local market. In the aftermath of the Mexican, Asian, and Russian crises of the 1990s, several authors began to argue that international investors contribute to and amplify financial crises by rapidly withdrawing their funds.1 Under such circumstances, the benefits of capital inflows are weakened and the dangers of adverse capital outflows grow strong. Krugman (1998) argued that imposing capital controls could be an effective way to stabilize the markets. Following Krugman's suggestion, Malaysia reimposed capital controls in September 1998. Today, China and Chile maintain restrictions on foreign capital flows, and Korea, Russia, and Turkey, among others, are debating the benefits of free capital mobility (Johnson & Mitton, 2003). For policymakers of developing countries where policies on financial market liberalization are reevaluated often, understanding the impact of foreign equity flows on their exchange rates and stock markets has become important, particularly during crisis periods. This study provides a valuable perspective that one can learn from a large emerging market, the Taiwan's stock market, which has imposed rigid capital controls since 1991, and makes its contribution for policymakers very important as they decide whether or not to impose controls and if so, what controls to adopt.2 This paper extends the literature by focusing on three issues. First, if a country faces a severe financial crisis, a major sale of local securities by foreign investors would be expected; however, the behavior of those sales during crisis periods as opposed to non-crisis periods is not well understood. Second, past studies of equity flows have focused on net purchases, that is, equity purchases minus equity sales, rather than on the two separate aspects of purchases and sales. If a goal of policymakers in these emerging markets is to attract foreign funds for the benefit of increased liquidity and lowered cost of capital, they need to know the behaviors of such purchases and net purchases. Similarly, since rapid foreigners' selling appears to promote instability in these markets, policymakers need to understand the selling characteristics as well. Thus this paper analyzes equity market purchases, sales, and net purchases. Third, past studies have emphasized mean effects between flows and returns rather than volatility effects and volatility spillover effects. This paper investigates relationships between flows and returns and expands to include relationships between flows and return volatility, between returns and flow volatility, and between flow volatility and return volatility. Using Taiwan's daily market data, five aspects of the relationship between purchases and returns, between sales and returns, and between net purchases and returns are studied. The first two aspects are feedback trading and information contribution effects in that market returns Granger cause equity flows and equity flows Granger cause returns, respectively. These two approaches will be applied to purchases, sales, and net purchases. Third, volatility effects of flows on return volatility, of returns on flow volatility, of flow volatility on returns, and of return volatility on flows will be investigated and fourth, the volatility spillover of flows and returns will be analyzed. Lastly, international investor behaviors during non-crisis periods will be compared to behaviors during crisis periods. In order to provide robustness checks, a comparison of the trading behaviors of foreign investors with those of Taiwan's local institutional investors will be made. Taiwan's experience is a good example of crisis effects when capital controls are in place.3 Taiwan is a fast-growing emerging market with a market capitalization of $261 billions in the end of 2002 and with rigid capital control regulation on foreign investors. In 1991, Taiwan allowed foreign portfolio investment in its equity markets but regulated foreigner's ownerships and trading activities through its qualified foreign institutional investors (QFII) system. QFII accounts, mainly including foreign banks, insurance companies, investment companies, and securities firms, may invest directly in Taiwan's securities under the approval of the Security and Futures Commission (SFC). In order to get the approval of the SFC, QFII must submit to the SFC the following documents: application form indicating the investment amount and the sources of funds, documents evidencing to meet the qualifications set by the SFC, and other required documents to vow only applying to be a QFII. Through the QFII system, the Taiwanese government is able to collect and monitor foreign trading activities daily and provides comprehensive and consistent data for foreigners' purchases and sales of TSE listed stocks. Some emerging countries consider Taiwan's QFII system effective in monitoring foreign capital flows and follow a similar regulation. For example, China announced its measures on allowing Qualified Foreign Institutional Investors (QFII) in its local securities markets on November 5, 2002. The regulation requires that foreign investors must apply for QFII licenses and investment quotas from China Securities Regulation Commission and State Administration of Foreign Exchange, respectively, to invest in China's securities market. Today, regulations on foreign capital investments are again being taken seriously and Taiwan, which has rigid capital controls and is relatively stable to other emerging markets, is a valuable case study, providing another perspective. The paper proceeds as follows: Section 2 reviews related literature; Section 3 presents data and methodology; Section 4 reports empirical results; and Section 5 concludes.

Using Taiwan's stock market as a case study, this paper investigates the relationships between equity returns, return volatility and stock purchasing and selling activities by foreign investors and local institutional investors before, during and after the 1997 Asian financial crisis. There are five general conclusions. First, feedback trading arguments are stronger than information contribution arguments, suggesting that trading activities of foreign and local institutional investors are closely associated with local market returns. Additionally, the Asian crisis did not change the feedback trading strategies of foreign investors. Second, relationships between returns and sale changes are weakest for information contribution, implying that sale changes have weak impact on market returns. Additionally, there is weak evidence that the Asian crisis changed the information effects of flows on returns for foreign investors. Third, strongest volatility effects occur after the crisis, indicating that the relationship between market volatility and equity flows is strengthened after the crisis. This suggests that the investment decisions of foreign investors significantly affect market volatility through time as foreigners play an increasing important role in Taiwan's market. Fourth, strong volatility spillover between flows and returns is found after the crisis. It appears that volatility in flows and volatility in market returns are strongly correlated through time. Finally, the results for foreign investors are slightly stronger than those for local institutional investors. We conclude that there is little evidence that the Asian crisis changed the relationship between equity flows and market returns in Taiwan's stock market but there is evidence that the Asian crisis affected the relationship between equity flows and market volatility. Overall results show that foreign investors have sharply increased their investments after the crisis and have a bigger influence on the Taiwan stock market in the post-crisis periods than in the crisis periods. The results from Taiwan's data provide valuable implications that one can learn from a large emerging market with capital flow controls in place, and make its contribution for policymakers, particularly in other emerging countries, very important as they decide whether or not to impose controls and if so, what controls to adopt. Taiwan's experience indicates that equity flows and return volatility are closely interrelated during crisis periods and sale changes have an increasing influence on market volatility after the crisis. This suggests that the benefits of market liberalization may be weakened by rapid and mass selling activities. Furthermore, volatility spillovers between returns and flows are becoming stronger through time, suggesting that variability of capital mobility is playing an important role in causing market volatility. Obviously, volatility spillover considerations between flows and returns would have to be included in that policy making process. Thus, policymakers, particularly in emerging countries, can take advantages of these findings and develop effective policies on capital flows, which could prevent institutional investors' manipulation of market variability and ensure that fickle equity flows do not destabilize the market. Though the effectiveness of Taiwan's QFII system on foreign capital controls is open to be debated, some emerging markets such as China have adapted similar capital control systems on foreign investors. It should be noted that Taiwan's stock market was relatively stable and was not seriously affected by the Asian crisis as much as the crisis-hit Asian countries—Thailand, Indonesia, Korea, and the Philippines. Thus we should be careful to generalize the implications of Taiwan's empirical results to other crisis-hit markets. For future research, the ability to compare Taiwan's market with the in-crisis emerging markets would be very valuable when the data are available.