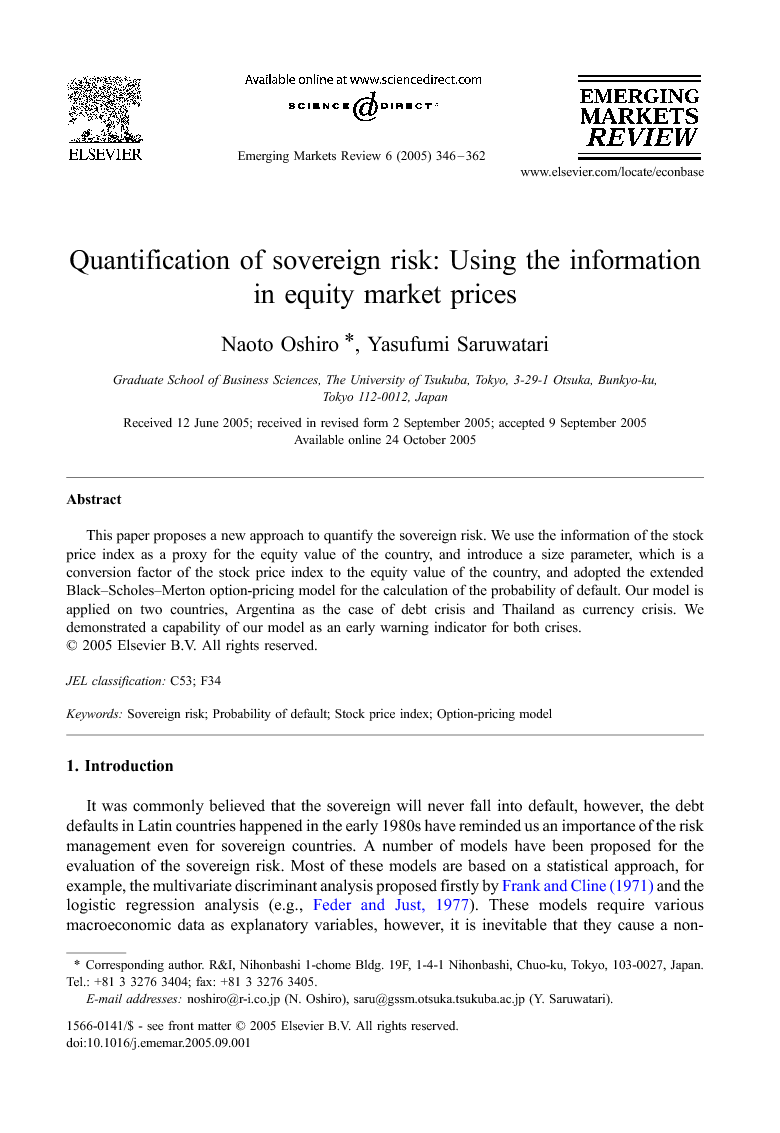 This paper proposes a new approach to quantify the sovereign risk. We use the information of the stock price index as a proxy for the equity value of the country, and introduce a size parameter, which is a conversion factor of the stock price index to the equity value of the country, and adopted the extended Black–Scholes–Merton option-pricing model for the calculation of the probability of default. Our model is applied on two countries, Argentina as the case of debt crisis and Thailand as currency crisis. We demonstrated a capability of our model as an early warning indicator for both crises.

It was commonly believed that the sovereign will never fall into default, however, the debt defaults in Latin countries happened in the early 1980s have reminded us an importance of the risk management even for sovereign countries. A number of models have been proposed for the evaluation of the sovereign risk. Most of these models are based on a statistical approach, for example, the multivariate discriminant analysis proposed firstly by Frank and Cline (1971) and the logistic regression analysis (e.g., Feder and Just, 1977). These models require various macroeconomic data as explanatory variables, however, it is inevitable that they cause a non-trifling time delay until the updated data become available. In addition, these data will be updated no more than once a year. These facts cause serious difficulties for the evaluation of the sovereign risks in timely manner. Redeeming these shortcomings in the statistical approaches, the elaborate analysis by professional researchers seems to be helpful. In fact, the sovereign ratings issued by the rating agencies, such as Moody's or Standard and Poor's (S&P), are quite common as the reference of the sovereign risk. They conduct exclusive interviews to both politicians and officers in the country, and make macroeconomic forecast based on confidential information. Therefore, it is necessarily considered that the sovereign ratings should be a better reference than the simple quantitative statistical approach. As a number of papers pointed out,1 however, the rating agencies indeed failed to predict the Asian crises that happened in 1997. In the field of the corporate credit risk measurement, the Black–Scholes–Merton (BSM) option-pricing model2 is fruitfully accepted, which is originally proposed by Black and Scholes (1973) and Merton (1974). Some of papers have applied the BSM option-pricing model to the measurement of sovereign risk. Gennotte et al. (1987) and Clark (1991) estimated the probability of default by employing an accumulated fixed capital formulation as the underlying asset in the option-pricing model. Kirmann and Maltritz (2003) showed the foreign exchange reserves and discounted that future net export incomes are the good proxy for the underlying asset or the ability to pay. Chesney and Morisset (1992), Claessens and Pennacchi (1991) and Cumby and Evans (1997) estimated the probability of default based on a stochastic model. Meanwhile, Bhanot (1998), Izavorski (1998), Copeland and Jones (2001) and Merrick (2001) proposed a method to estimate the probability of default from the pricing model of sovereign bonds. Lehrbass (2000) proposed a pricing model of Eurobonds by use of equity indices. In this paper, we propose a new model to quantify the sovereign risk. Our model is constructed based on the BSM option-pricing model, which enables us to evaluate sovereign risk in timely manner. We use a stock price index, as a proxy for the equity value of the country, and a sovereign bond-price. We treat both debt default (debt crisis) and currency crisis. Although most of previous studies dealt with these two crises as separate issue, as Reinhart (2002) reported, there is a close relationship between defaults and currency crises, and indeed Reinhart (2002) showed the 58% samples of debt crises have fallen into defaults within twenty-four months after the currency crisis. We will examine the effectiveness of our model for predicting both debt and currency crises. The remainder of this paper is organized as follows. Section 2 describes the usefulness of the information from the stock market in evaluating the credit risk, and its potential application to the sovereign risk. Section 3 describes the details of our model. Some results and reviews are summarized in Section 4. Our discussion and future extensions are in Section 5.