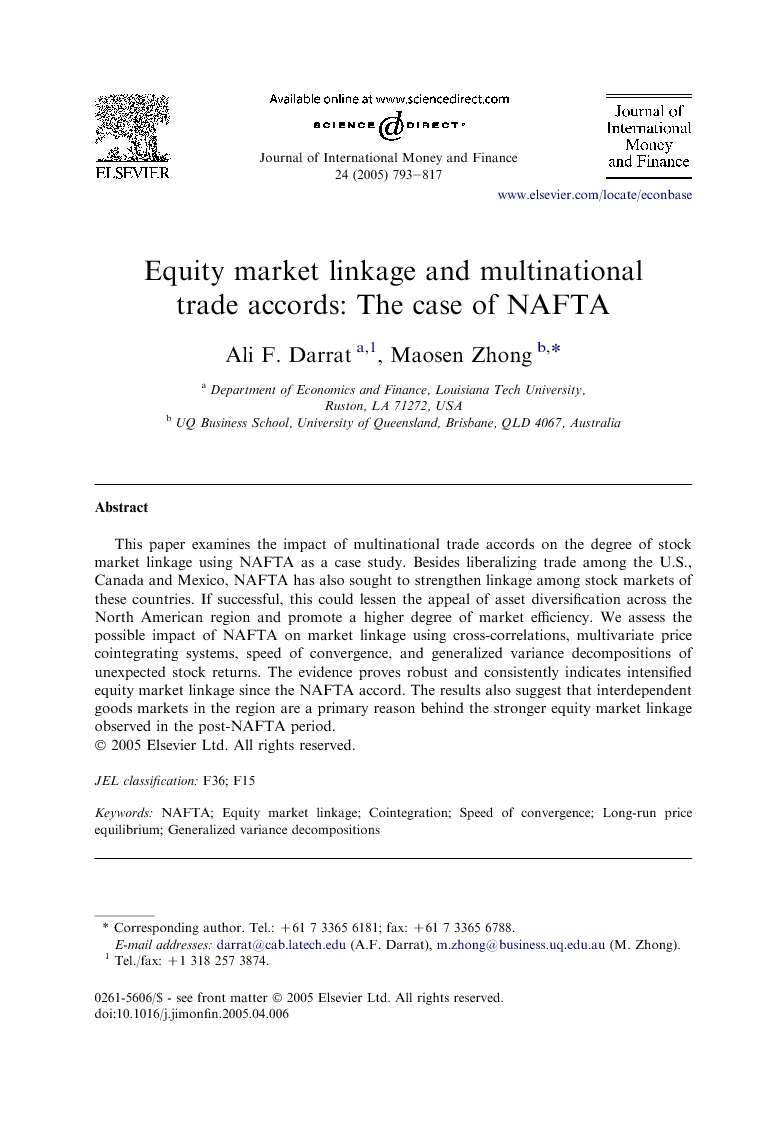 This paper examines the impact of multinational trade accords on the degree of stock market linkage using NAFTA as a case study. Besides liberalizing trade among the U.S., Canada and Mexico, NAFTA has also sought to strengthen linkage among stock markets of these countries. If successful, this could lessen the appeal of asset diversification across the North American region and promote a higher degree of market efficiency. We assess the possible impact of NAFTA on market linkage using cross-correlations, multivariate price cointegrating systems, speed of convergence, and generalized variance decompositions of unexpected stock returns. The evidence proves robust and consistently indicates intensified equity market linkage since the NAFTA accord. The results also suggest that interdependent goods markets in the region are a primary reason behind the stronger equity market linkage observed in the post-NAFTA period.

Understanding the link between international trade and equity markets is important for pricing securities across borders, for managing multinational asset portfolios, and for global hedging strategies. This study investigates the impact of the North American Free Trade Agreement (NAFTA) on equity market linkage in the region. Ratified in January 1994, NAFTA's primary goal is to liberalize trade among the three North American countries. Evidence suggests that NAFTA has thus far succeeded in promoting trade in the region (e.g., Gould, 1996, Gould, 1998 and Kouparitsas, 1997). Although the main focus of NAFTA is on eliminating (or reducing) barriers to regional trade in goods and services, the accord has also sought to promote cross-country investment among the three economies. Article 1109, for example, calls for the free and quick transfer of all payments relating to equity transactions including dividends, interest, and capital gains. Several other provisions relax restrictions on cross-country investing and foreign stock ownership. A growing literature suggests that the evolution of equity market linkage across national borders tends to be associated with international trade and other macroeconomic factors. For example, Kouparitsas (1997) and Bracker et al. (1999) highlight the importance of interdependence among international goods markets when discussing equity market linkages. Phylaktis and Ravazzolo (2002) also report evidence suggesting that financial and economic integrations are significantly related in a group of Pacific Basin countries. This paper examines the impact of NAFTA on the equity market linkage among the U.S., Canada and Mexico. In addition, our analysis has other important practical and theoretical implications. In particular, if stock markets in the three North American countries have become more linked in the post-NAFTA regime, then asset diversification within the region will lose much of its appeal. Moreover, a higher degree of market comovements promotes faster adjustments of equity prices to information flows from member countries, leading to more efficient markets. The degree of equity market linkage is also important for international capital budgeting. As Cooper and Kaplanis (2000) argue, optimal corporate decision rules in capital budgeting for segmented markets differ from those for fully integrated markets because similar equities provide different net returns depending on the degree of market linkages. If NAFTA has indeed strengthened equity market linkage in North America, companies will have access to capital on equal terms. This may lessen the home-country bias. Another implication pertains to possible welfare gains. Interdependent equity markets complement the goods markets as they effectively provide the price-discovery function for international trade and facilitate an optimal timing for international asset claims. Furthermore, under a stronger market linkage across borders, a multinational version of the capital asset pricing model becomes a more appropriate framework than the domestic version commonly used for individual equity markets. Our paper contributes to the literature in several other respects. First, prior research suggests that equity market linkage has a time-varying characteristic (Longin and Solink, 1995; Karolyi and Stulz, 1996). Bekaert and Harvey (1997) and Ng (2000) also argue that liberalized markets tend to correlate more. Yet, there is little research on the potential impact of multinational trade accords like NAFTA on equity market linkage of member countries. We attempt to fill this void in the literature. Second, we use several econometric methods to investigate the impact of NAFTA on the degree of equity market linkage. The methods include (i) analyzing long-run equity price equilibria, (ii) examining the speed of convergence to the price equilibrium, and (iii) conducting variance decompositions on unexpected returns. These methods address different aspects of the equity market linkage. Analysis of long-run equity price equilibria and disequilibrium shocks focuses on whether national equity prices in the three North American countries move together around a common equilibrium path, and examine how quickly these markets revert to price equilibria. Having found a robust long-run price relation binding the three North American stock markets, we then use persistence profile analysis to investigate the speed of convergence to price equilibrium given a system-wide composite shock. Decomposing the variance of unexpected returns addresses the question of whether unexpected return variations in a given market can be explained by innovations (news) in other markets. Throughout all these methods, we focus on whether NAFTA has influenced market linkage in the region. Third, we also differentiate between the confounding effects of NAFTA and the Mexican peso crisis of late 1994 on market linkage. Following Bracker et al. (1999), we model long-run linkages among equity markets as a function of several variables including those representing the goods markets disequilibrium, the NAFTA accord, and the Mexican peso crisis. Section 2 discusses the data and their stochastic properties. Section 3 analyzes the impact of NAFTA on the long-run equity price relations. Section 4 examines the speed of the markets' adjustment to price disequilibria. Section 5 presents the empirical results for discriminating among possible factors affecting the degree of market linkage. Section 6 examines the variance decompositions of unexpected returns before and after the passage of the NAFTA accord. Section 7 concludes the paper.

The main purpose of this paper is to examine the impact of NAFTA on the equity market linkage among the three North American countries. Since its inception in January 1994, NAFTA has sought to strengthen market linkage in the region which, if successful, could lessen the appeal of asset diversification and promote market efficiency in the North American region. We use several empirical procedures to measure the degree of market linkage, including analysis of long-run equity price equilibrium, examination of the speed of convergence to price equilibrium, and the computation of generalized variance decompositions of unexpected returns. We also perform regression analyses to examine how market linkage has evolved in the three North American countries after NAFTA. The empirical evidence unambiguously suggests that NAFTA has indeed intensified market linkage in the region. This inference proves quite robust and persists over several tests of market linkage. The results indicate that NAFTA has promoted a significant and a more stable long-run linkage among the three North American stock markets. The presence of a stronger market linkage in the post-NAFTA period casts some doubt on the extent of benefits from international diversifications. Moreover, regression results derived from long-run equity price disequilibria suggest that one driving force behind stronger equity market linkage is likely the increased interdependence among the goods markets in the region rather than the Mexican peso crisis. These findings corroborate results reported by Bracker et al. (1999) and Phylaktis and Ravazzolo (2002) that show that linkage among equity markets may depend on the degree of economic integration. Finally, our results support recent trends in the literature to internationalize the traditional capital asset pricing model and confirm the fruitfulness of such efforts (e.g., Bekaert and Harvey, 1995 and De Santis and Imrohoroglu, 1997). One possibly interesting extension of these important studies is to incorporate the underlying long-run price equilibrium when modeling international asset prices.