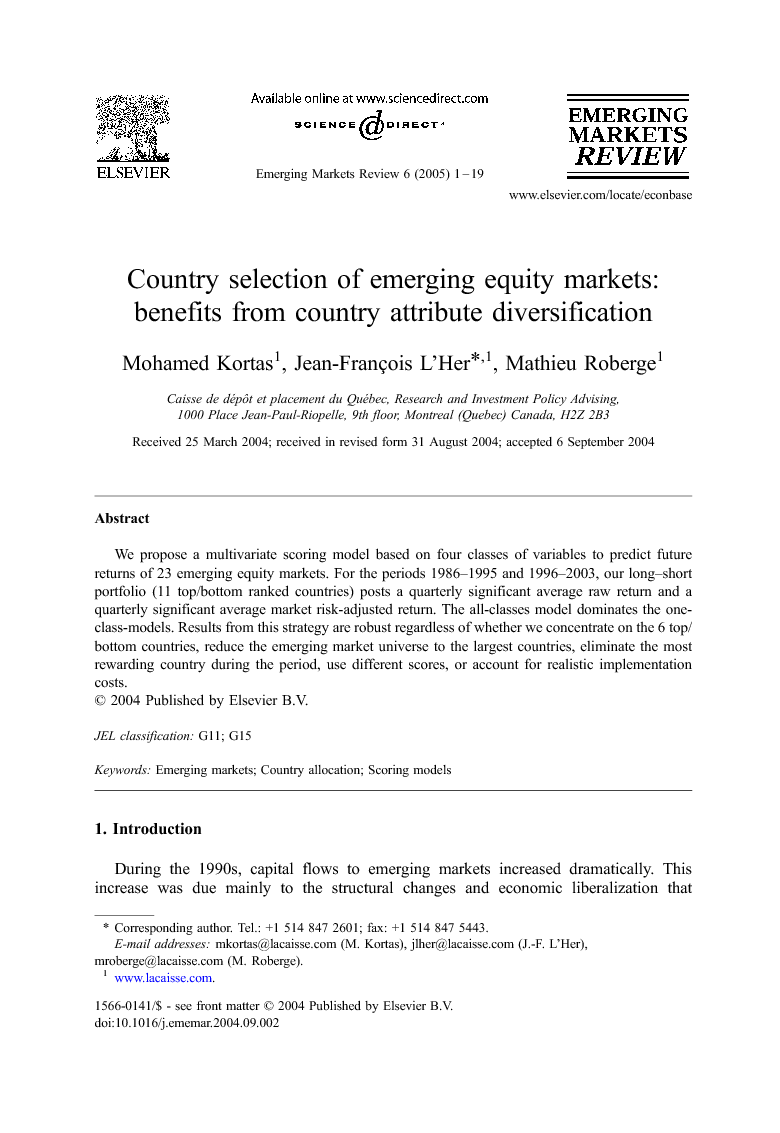 We propose a multivariate scoring model based on four classes of variables to predict future returns of 23 emerging equity markets. For the periods 1986–1995 and 1996–2003, our long–short portfolio (11 top/bottom ranked countries) posts a quarterly significant average raw return and a quarterly significant average market risk-adjusted return. The all-classes model dominates the one-class-models. Results from this strategy are robust regardless of whether we concentrate on the 6 top/bottom countries, reduce the emerging market universe to the largest countries, eliminate the most rewarding country during the period, use different scores, or account for realistic implementation costs.

During the 1990s, capital flows to emerging markets increased dramatically. This increase was due mainly to the structural changes and economic liberalization that took place in many of these markets. These changes were beneficial and had a significant impact on the local markets. During the first half of the 1990s, emerging markets offered high rates of returns, high risk, and low correlations with developed markets. Over the last half of the 1990s, the performance characteristics of emerging markets changed because of financial crises and the financial and economic integration of emerging markets with the developed markets (Bekaert et al., 1997 and Bruner et al., 2003). These changes raise several questions for international investors about the benefits of investing in emerging markets and how to select performing emerging markets. However, despite these questions, the potential return of these markets remain higher than those of their developed market counterparts. Bruner et al. (2003) note that at the end of December 2002, emerging markets represent 10.5% of the world market capitalization while they account for 20% of the world GDP. Another source of concern related to emerging markets is whether investors should focus mainly on country, or industry selection. Bekaert et al. (1997) document an increasing integration between emerging markets and developed markets. Bilson et al. (2001) and Bruner et al. (2003) find evidence that emerging markets remain at least partially segmented and that country factors dominate industry factors in explaining cross-sectional variations among individual stocks. Country diversification is therefore more important than industry diversification for institutional investors. The risk of investing in emerging markets depends mainly on local factors, and active management should focus on country selection. Serra (2000) also concludes that emerging markets returns are driven mainly by country factors. Van Der Hart et al. (2003) examine a global bottom-up multivariate trading strategy based on the 15% of top ranked stocks. They find that this global strategy is potentially more rewarding, but riskier than a country-neutral strategy. Using a normative approach and a bootstrap method, Estrada et al. (2004) corroborate this general conclusion, but underline that while the conclusion may hold for Asia, it is not as conclusive for Latin America, and Europe, Middle East, and Africa (EMEA). Previous studies have attempted to identify the most important factors for country selection among emerging markets. Bekaert et al. (1997) examine a comprehensive set of country-specific risk attributes over the January 1985–August 1996 period. They find that long–short portfolios based on country risk, trade-to-GDP or earnings-to-price measures post-significant returns. Kargin (2002) examines a long-only strategy based on the book-to-market ratio, the return on equity, plus a persistence variable. An equally weighted portfolio including the eight countries having the highest regression-forecast returns outperforms the equally and value-weighted emerging markets indexes over the period going from August 1991 to August 2001. In this paper, we investigate a country selection model for emerging equity markets. We use an ex ante approach and propose an investable strategy based on seven predictive variables. We focus on four classes of predictive variables of emerging market returns: fundamental, macroeconomic, technical, and country risk. In the same vein as Van Der Hart et al. (2003) who document that multivariate strategies outperform univariate strategies, we examine the diversification benefits that result from different country attributes for emerging markets country allocation. Contrary to several studies that distinguish between an in-sample model calibration period and an out-of-sample performance analysis period, we focus on a more practitioner-oriented approach. We analyze the performance of a diversified strategy that puts equal weight on each attribute and requires no calibration. Considering the time-varying environment that characterizes emerging markets, our strategy does not bet (by overweighting or underweighting) on any class of variables, nor does it bet on a structural relation between emerging market returns and predictive variables which is expectedly non-linear and time-varying. We examine the 1986–2003 period, but we focus on the 1996–2003 period. Several papers initiated by Erb et al. (1996), Bekaert et al. (1997), and a monograph by Erb et al. (1997) provide in-depth results from country selection models in emerging markets over the 1986–1995 period. Our study is in keeping with these aforementioned studies, and provides a 8-year update. The 1996–2003 period is interesting for emerging markets research, as it covers many severe crises that occurred in these markets. Contrary to what happened in the first half of the 1990s, when emerging markets showed strong returns that were interrupted by the Mexican crisis, the second half of 1990s posted poor returns. We use a long–short portfolio based on the 11 top/bottom countries ranked according to this multivariate scoring model. We find that this portfolio posts a significant quarterly average raw return of 5.8% over the 1996–2003 period. The average quarterly market risk-adjusted return of the strategy is 5.3%, and is significantly greater than zero. The model that considers all classes of variables dominates those that examine only one class of variables. We provide evidence that results from this core strategy also hold over the 1986–1995 period. We show that our results are robust to different sensitivity tests that look at the 6 top/bottom countries, reduce the emerging market universe to the largest countries, eliminate the most rewarding country during the period (Russia), use different scores, or account for realistic implementation costs. The paper is organized as follows. Section 2 describes our data and method. Section 3 discusses the empirical findings, and we conclude in Section 4.

We examine the relation between future returns in emerging equity markets and four classes of variables: fundamental, macroeconomic, technical, and country risk over the 1996–2003 period. Using a scoring model, we find that the four classes of variables help to predict future returns of the 23 emerging markets that we analyze. A quarterly rebalanced long–short portfolio (a long position in the countries with the highest average scores and a short position in the countries with the lowest average scores) posts an average 5.8% quarterly raw return. When we control for the market risk factor, the strategy posts a significant 5.3% quarterly risk-adjusted return. Our results for the out-of-sample 1986–1995 period are similar and are consistent with results obtained by Bekaert et al. (1997). Furthermore, our scoring model still posts a significant performance when we control for the number of countries in long/short portfolios, the emerging market universe, the score definition, or the high level of transactions costs. The results of our study seem promising for country allocation among emerging equity markets. This study leaves space for further research. Although the calibration of emerging market selection model is a hard task with noisy emerging equity returns, it is not unsurmountable. Multinomial probit regressions, recursive partitioning models, or neural networks represent promising research avenues to deal with the non-linear structures between emerging market returns and predictive variables. Furthermore, as suggested by Achour et al. (1998), weights on country attribute are assumed constant through time; however, some classes of country variables may subsume the other in certain economic environments. Beyond country attribute diversification, style diversification may pay (see Desrosiers et al. (2004), for developed markets). The weight of each class of country attributes could thus be allowed to change through time as the classes of variables cycle in and out of favour.