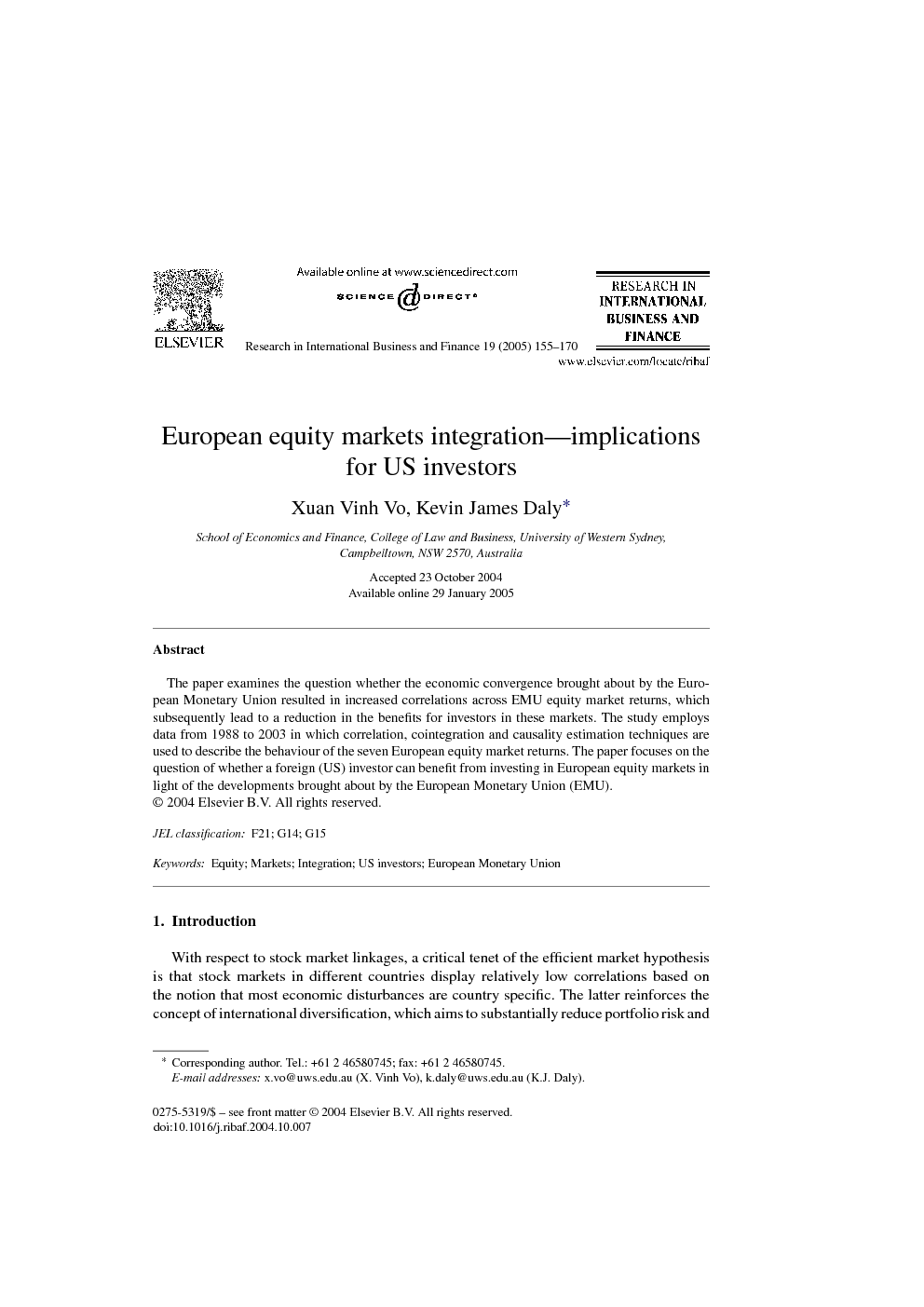 The paper examines the question whether the economic convergence brought about by the European Monetary Union resulted in increased correlations across EMU equity market returns, which subsequently lead to a reduction in the benefits for investors in these markets. The study employs data from 1988 to 2003 in which correlation, cointegration and causality estimation techniques are used to describe the behaviour of the seven European equity market returns. The paper focuses on the question of whether a foreign (US) investor can benefit from investing in European equity markets in light of the developments brought about by the European Monetary Union (EMU).

With respect to stock market linkages, a critical tenet of the efficient market hypothesis is that stock markets in different countries display relatively low correlations based on the notion that most economic disturbances are country specific. The latter reinforces the concept of international diversification, which aims to substantially reduce portfolio risk and increase expected returns. Several studies have demonstrated the advantages of international diversification stemming from low correlations, for example Divecha et al. (1992), Michaud et al. (1996), and De Fusco et al. (1996). In these studies the major explanations for low correlations across international equity markets include; barriers to international trade and investment, lack of free trade, inadequate information on foreign securities or simply home investors bias. By contrast recent studies by Koutmos and Booth (1995), and Meric and Meric (1989), provide evidence of a significant increase in correlations between equity markets during and after 1987. More recently Daly (2002) provides evidence of increased correlations between the markets of southeast Asia after the 1997 stock markets collapse. Here, the cause of increased co-movement between equity markets in the above studies is generally attributed to the effects of contagion. In particular Daly's (2002) study of southeast Asian markets points toward the rapid integration in trade and capital markets across what were formally known as Asian Tiger economies as the major reason for the rapid spread of the 1997 financial crises. According to this view, contagion effects arose when shocks to one economy were transmitted to other economies that were linked to the former by trade and finance. Given the degree of European capital markets integration, which has occurred between European equity markets over the period up until the formation of the European Monetary Union (EMU) an interesting question arises as to whether an investor continues to benefit from international diversification in European equity markets. The EMU represents the final stage of the complete economic and monetary union among the countries participating in the European Union (namely Austria, Belgium, Denmark, Finland (recent member) France, Germany, and Greece (recent member), Ireland, Italy Luxembourg, The Netherlands, Portugal, Spain, Sweden and the UK). These countries signed the Maastricht in January 1995; the latter begins with criteria for nominal convergence and ends with the fixing of conversion rates 2001. Conditions necessary for the formation of a stable long-run relationship between members requires that the targets for variables related to each criteria are achieved, members failing to meet targets are penalised. The EMU therefore highlights economic convergence as the primi a facia objective for its membership, particularly in regards to outputs, earnings and equity markets. Classical portfolio theory predicts that the attractiveness of portfolio holdings in the above countries would lead to a diminution of portfolio holdings in these countries relative to such holdings in other countries due to increases in market correlations. In view of the above discussion, the purpose of this paper is to explore the possible diversification benefits, from the perspective of a US investor, investing in the unified European markets. To address the issue we employ correlation, bivariate and multivariate tests along with causality tests to reveal whether long-term stochastic trends exist between US equity market investors and the European Union's equity markets. Evidence of such long-run co-movement would suggest overstated benefits to US investors with long-range investment horizons who seek diversification in these markets.

In this paper, we presented an analysis of cointegration between the US and several European Union equity markets. The empirical results indicate that between 1993 and 1998, when the European equity markets embarked on a process of financial and economic convergence in preparation for the EMU and a single currency there is mixed evidence of cointegration ties with the US equity market. Furthermore over the period covering the introduction of the euro (1998–2003), six of the seven above markets did not show any evidence of cointegration with the US market. Finally bivariate Granger causality tests revealed significant causality running from the US to the European markets especially in the pre- and post-euro introduction period. The results have important implications for long-run diversification returns for a US investor. Firstly, the European markets do not share a common stochastic trend with the US equity market and indicate diversification benefits for both short and long-term investors, this effect is particularly strong over the period covering the introduction of the euro. Secondly, the ever increasing pace of global financial integration indicates that equity return correlations will keep increasing and that would suggest that they be considered an important factor in asset allocation decisions in the future. What can we conclude from the cointegration and Granger causality tests results above regarding the potential diversification benefits for a US investor wishing to invest in the European equity markets? Firstly, the cointegrability property of equity markets in European markets covered in this study has decreased due to several changes within the European rate mechanism such as the widening of the fluctuations bands (from ±2.25 in the 1980s to ±15 percent in the early 1990s). Therefore the absence of cointegration amongst the EU equity markets may reflect a gradual process of convergence of the interest rates of individual EMS countries (with that of Germany's), a process that makes cointegration relationships variant over time. Other factors such as for instance the weaker European countries such as Greece, Portugal and Spain have undertaken various market liberalisation stages compared to their more advanced partners. The relaxation of restrictions on foreign exchange and capital flows may not be sufficient to attract foreign investors and further strengthen international capital market linkages. Other factors such as poor accounting standards, information dissemination and political risks may influence the movement toward a universal EU capital market. These reasons do provide significant justifications why European equity markets have not shown long-term comovement with each other suggesting that potential diversification benefits within Europe still exists for a US investor.