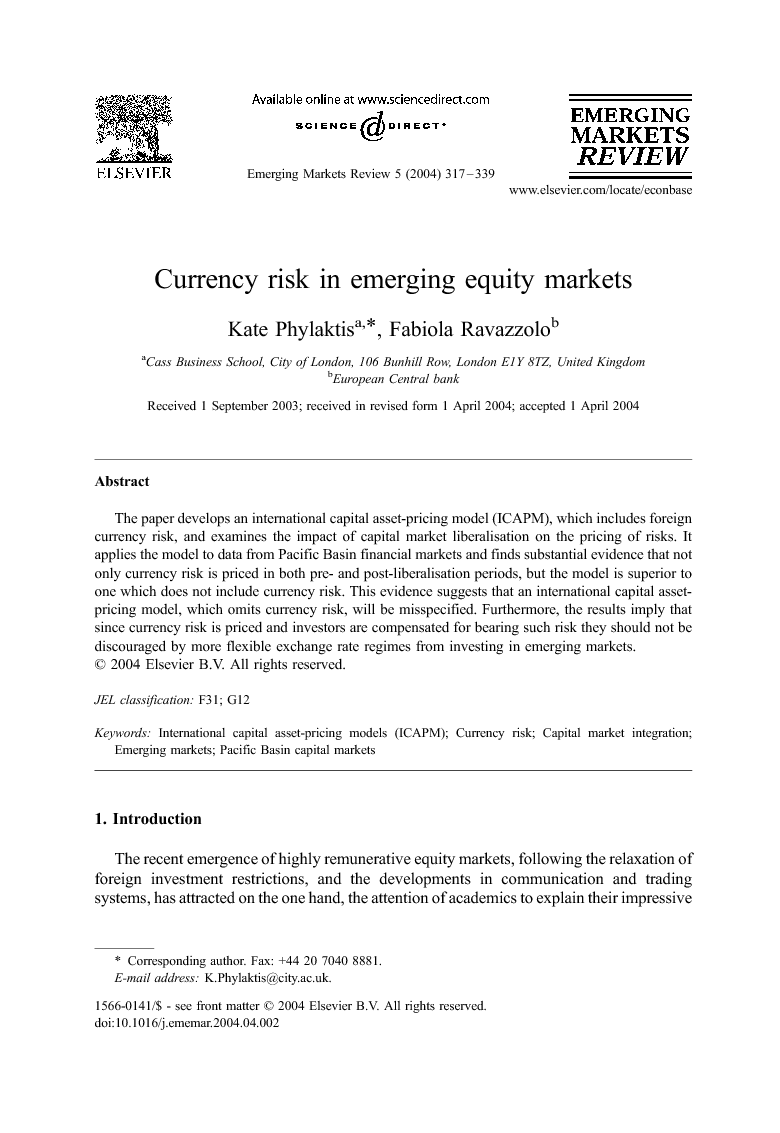 The paper develops an international capital asset-pricing model (ICAPM), which includes foreign currency risk, and examines the impact of capital market liberalisation on the pricing of risks. It applies the model to data from Pacific Basin financial markets and finds substantial evidence that not only currency risk is priced in both pre- and post-liberalisation periods, but the model is superior to one which does not include currency risk. This evidence suggests that an international capital asset-pricing model, which omits currency risk, will be misspecified. Furthermore, the results imply that since currency risk is priced and investors are compensated for bearing such risk they should not be discouraged by more flexible exchange rate regimes from investing in emerging markets.

The recent emergence of highly remunerative equity markets, following the relaxation of foreign investment restrictions, and the developments in communication and trading systems, has attracted on the one hand, the attention of academics to explain their impressive returns, and on the other hand, the interest of international fund managers as opportunities for portfolio diversification benefits. The adoption of more flexible exchange rate regimes by many emerging economies however in the late 1980s and early 1990s is likely to have affected the foreign currency risk associated with international investment and to have made the choice of currency denomination an important element in the overall portfolio decision. The objective of this paper is to develop an international capital asset-pricing model, which includes currency risk, and to examine the impact of capital market liberalisation on the pricing of risks. Previous capital asset-pricing models can be classified into three groups based on the type of risk considered in pricing expected returns: segmented market models, which evaluate expected equity returns as a function of only the country-specific risk represented by stock returns variance (see, e.g. Black, 1972); the integrated market models where studies assume that all the world capital markets are perfectly integrated, and therefore the source of their risk can be associated with the covariance of the local stock market returns with the world market portfolio (see, e.g. Ferson and Harvey, 1994); and the partially segmented market models, which considered an asset-pricing model, where the framework in which the polar segmented/integrated cases are replaced by a mild segmentation structure (see Errunza et al., 1992). While this model presents the advantage of avoiding the choice between the scenario of full segmentation and perfect integration, the framework has the disadvantage of selecting a degree of segmentation that is fixed through time. Errunza et al.'s limitation has recently been overcome by Bekaert and Harvey (1995) and De Santis and Imrohoroglu (1997). Bekaert and Harvey (1995) proposed a one-factor asset-pricing model that allows the conditional expected returns of a country to be affected by their covariance with a world benchmark portfolio when the market is integrated and by the variance of the country returns when the market is segmented. When applying the model to a group of emerging capital markets over the period 1975 to 1992, they find that countries with extensive foreign ownership restrictions, such as Korea and Taiwan, were integrated with the world capital markets. De Santis and Imrohoroglu (1997) study the stock returns and the volatilities of a group of emerging capital markets under different degrees of integration by introducing a dynamic integration version of the classic CAPM framework that assumes full-market segmentation until the official liberalisation date of each capital market, and full integration thereafter to capture the fact that the analysed markets were legally segmented for part of the sample period. The evidence shows that neither the country-specific risk is priced when markets are segmented, nor the world market risk when markets are integrated. At the same time, another strand of literature (see Dumas, 1994 and Dumas and Solnik, 1995) has shown theoretically and empirically that when using the international capital asset-pricing model (ICAPM) framework with currency risk for a sample of securities in Germany, US, Japan and UK, the currency risk is priced. The pricing of currency risk has also been confirmed by De Santis and Gerard (1998) when considering a conditional version of the ICAPM based on multivariate GARCH, with foreign exchange risk, for equity markets and 1-month Eurocurrency deposits for the same group of countries examined by Dumas and Solnik (1995).1 Based on the results about the importance of currency risk, our paper extends the dynamic integration conditional CAPM of De Santis and Imrohoroglu (1997) by including currency risk. Our analysis considers the same Asian Pacific countries (with the exception of India) as analysed in their study for the sample period 1980 to 2000, compared to their sample period of 1988 to 1996, and shows that in contrast to their results both market and currency risks are priced. Thus, our main objective and contribution to the literature is the examination of the importance of currency risk in explaining the stock returns of emerging equity markets using a framework which allows for a regime switch in the sources of risk affecting stock returns when they become open to foreign investors. Our approach of incorporating currency risk within an ICAPM framework is in fact a variation of De Santis and Gerard (1998). Our specification, however, reflects the limitations of data availability regarding suitable series for interest rates. The paper is structured as follows. Section 2 explains the dynamic integration asset-pricing model of both equity returns with and without currency risk, and currency returns. It also explains the estimation method of their conditional variances and covariances by using a trivariate Generalised Autoregressive Heteroskedastic (GARCH) process. Section 3 reports summary statistics and information on the liberalisation of the financial markets. Section 4 discusses the empirical results. The final section summarises the main findings and offers some concluding remar

In this paper, we have developed an international capital asset-pricing model, which included both market and currency risks and allowed full-market segmentation until the official liberalisation date and full integration thereafter. The dynamic integration structure was also applied to pricing currency returns in accord with a risk-adjusted UIRP model. We used a parsimonious multivariate GARCH-in-Mean process in estimating the conditional dynamics of our system of equations, which allowed also for the examination of the effects of capital market liberalisation and the Asian Financial crisis of mid-1997 on the volatilities of stock and currency returns. Our results have highlighted the importance of taking into account such structural changes in the conditional variances when estimating international asset-pricing models. Our main contribution is the incorporation of the currency risk in pricing expected stock returns for markets whose degree of capital market integration changes, which is a phenomenon of emerging markets. Consistent with Dumas and Solnik (1995) and De Santis and Gerard (1998), we find strong support for the specification of an ICAPM that includes both market and currency risk. Furthermore, the risk is priced in both pre- and post-liberalisation periods. Thus, omitting foreign currency risk in pricing international assets might give rise to model misspecification as we have shown to be the case for De Santis and Imrohoroglu (1997). Although our model describes expected returns of our group of emerging markets relatively well, we acknowledge that it suffers from the limitation that the date of change from segmented to open markets is selected a priori and is irreversible. We also found that currency returns are related to their risk. In addition, we noted that their covariance with the local stock market returns in pre-liberalisation and with the world market returns in post-liberalisation are important explanatory factors. Consistent with previous studies, such as Bekaert and Harvey (1995), our results indicate that the Pacific Basin countries are integrated with world markets. In particular, we noted integration also for countries such as Korea and Taiwan, which maintained extensive capital controls during the 1990s. These results have implications for the use of foreign exchange restrictions to isolate capital markets from world influences. The empirical evidence reveals that the components of the risk premiums vary significantly over time and across markets. The currency risk premium is substantial and forms a big part of the total risk premium, dominating it at times. It is also bigger and more variable when markets are segmented. In general, our results have shown that currency risk is an important component in international capital asset-pricing models even during periods when markets are not officially open to international investors. Since indeed currency risk is priced and investors are compensated for bearing such risk they should not be discouraged by more flexible exchange rate regimes from investing in emerging markets.