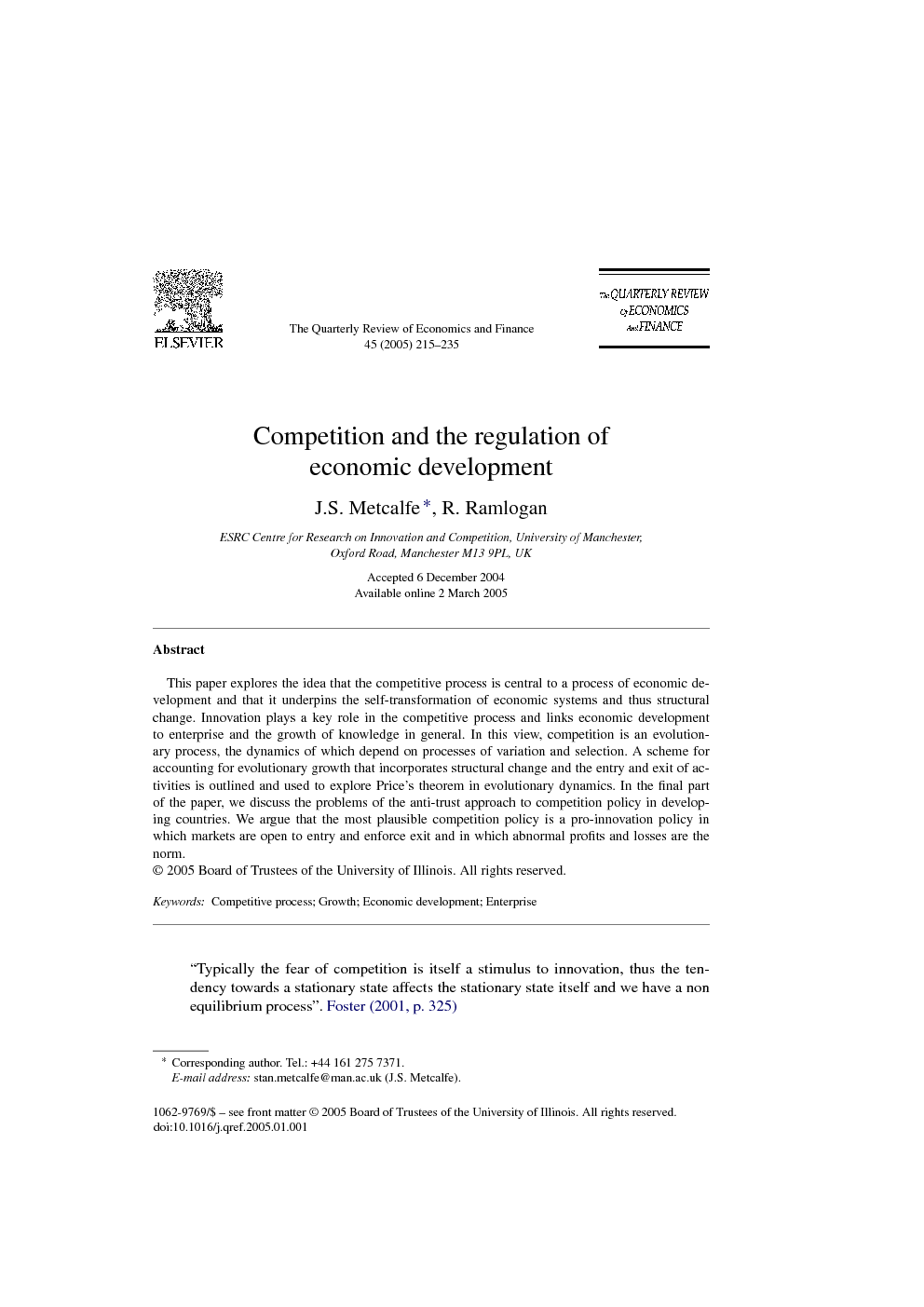 This paper explores the idea that the competitive process is central to a process of economic development and that it underpins the self-transformation of economic systems and thus structural change. Innovation plays a key role in the competitive process and links economic development to enterprise and the growth of knowledge in general. In this view, competition is an evolutionary process, the dynamics of which depend on processes of variation and selection. A scheme for accounting for evolutionary growth that incorporates structural change and the entry and exit of activities is outlined and used to explore Price's theorem in evolutionary dynamics. In the final part of the paper, we discuss the problems of the anti-trust approach to competition policy in developing countries. We argue that the most plausible competition policy is a pro-innovation policy in which markets are open to entry and enforce exit and in which abnormal profits and losses are the norm.

The central theme of this paper is competition as the regulator and promoter of economic development and our discussion is premised on the idea that competition and development are complementary processes for the transformation of economies from within. Their complementarity resides in several dimensions. These dimensions reflect the open ended growth and application of new knowledge, they depict an economy that is far from equilibrium, and they are processing that cannot be understood in terms of the comparative statics of self-contained equilibria. Most fundamentally, the relevant processes are discovery processes in which search, uncertainty, and choice over decisions with necessarily unknowable outcomes are intrinsic features of competition and development (Bruton, 1985). In short, competition and development share the attributes of experimental, evolutionary processes that are ordered but are necessarily unstable; for if they were not unstable they could never escape the prevailing set of attractors. Stable systems cannot develop they can at best grow in terms of a given set of activities; they cannot acquire attributes different from those they currently have. As Ulrich Witt and others have pointed out, this fundamental fact about development links development and competition to the emergence of novelty and the self-transformation of the economy (Dosi, 2000, Metcalfe, 2001 and Witt, 2003b). A process view of competition and development connects to new uses for resources, to the creation of new activities, to the formation of new patterns of consumption and demand, and to innovation and rivalry; its essential attribute is the link between enterprise and economic self-transformation. We contrast this view with the more familiar idea of regulating states of competition, arguing that the static theory of resource allocation, in which the conventional ‘anti-trust’ case is grounded, is a distorting mirror in which to reflect the competition policy needs of developing economies. The static foundations of the traditional view make no effective connection with economic development as a process, and thus a competition policy formulated in these terms, we argue, is too narrow a basis for the formulation of a pro-development competition policy. Indeed, the central thrust of our argument is that the promotion of competition as a process of business rivalry is not the same as the regulation of the market behaviour of errant firms. Rivalry connects directly to enterprise and innovation and thus to the wider framework of competition policy. Traditional views of the abuse of market power and the definition of markets are displaced by a concern with open markets, the prevention of exclusionary practices by incumbent firms and the stimulation of enterprise (Charles River Associates, 2002; Krattenmaker, Lande, & Salop, 1986).

We have suggested that the competitive process and the development process are so intertwined as to be indistinguishable to all intents and purposes. Both operate over different timescales in mutually supportive ways. A developing economy which is dormant is unlikely to be competitive, it will not be characterized by the creation and application of new knowledge it will be asleep it will offer no escape from poverty for its citizens. By contrast, an innovation-based economy in which new knowledge is continually generated and applied will be competitive, it will be characterized by ongoing structural and qualitative change, by market selection, and by entry and exit so that the economy continually becomes a new economy. It is an economic system that will increase the general standard of living and economic welfare in a sustainable and self-sustaining fashion.18