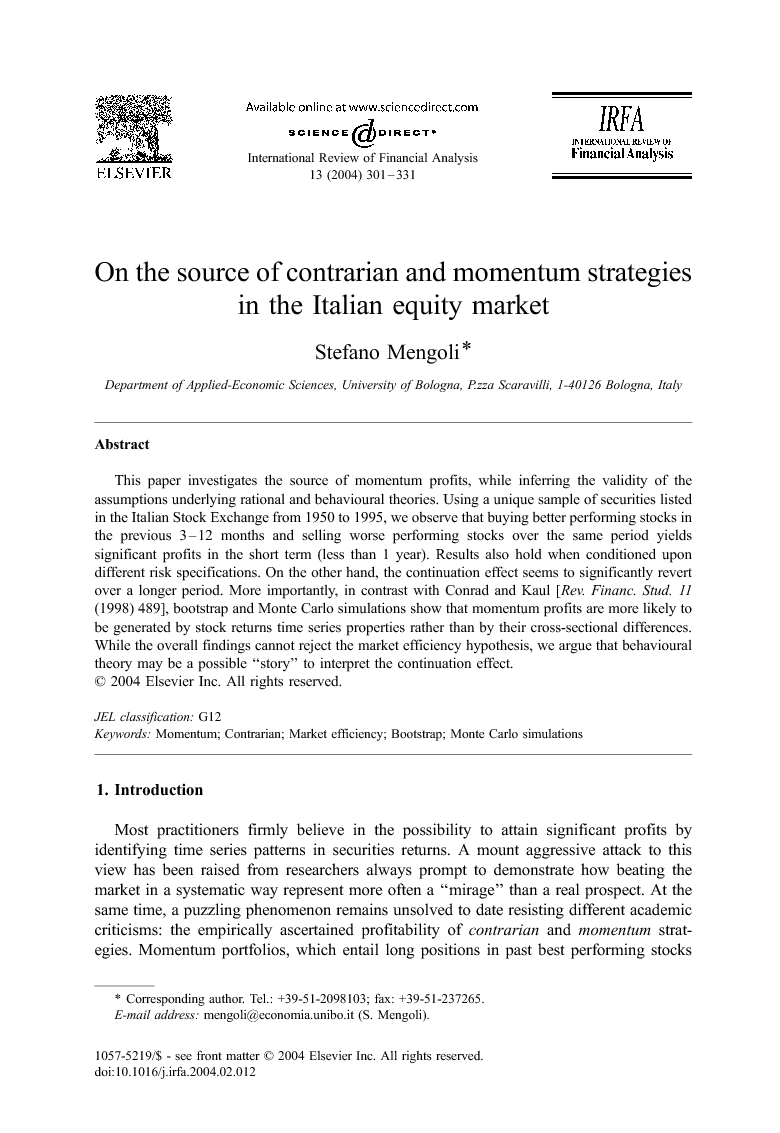 This paper investigates the source of momentum profits, while inferring the validity of the assumptions underlying rational and behavioural theories. Using a unique sample of securities listed in the Italian Stock Exchange from 1950 to 1995, we observe that buying better performing stocks in the previous 3–12 months and selling worse performing stocks over the same period yields significant profits in the short term (less than 1 year). Results also hold when conditioned upon different risk specifications. On the other hand, the continuation effect seems to significantly revert over a longer period. More importantly, in contrast with Conrad and Kaul [Rev. Financ. Stud. 11 (1998) 489], bootstrap and Monte Carlo simulations show that momentum profits are more likely to be generated by stock returns time series properties rather than by their cross-sectional differences. While the overall findings cannot reject the market efficiency hypothesis, we argue that behavioural theory may be a possible “story” to interpret the continuation effect.

This paper presents evidence on contrarian and momentum profits in the Italian equity market. Using a unique sample of monthly returns for all securities listed from 1950 to 1995, we aim to assess both the profitability of these strategies and their underlying generating sources. While the former problem is addressed using different methodologies and accounting for different risk specifications, the latter issue, which is somehow the essence of the analysis, is tackled by carrying out a number of simulation experiments. We first find that momentum strategies are profitable in the medium term (from 3 to 12 months). Past winners outperform past losers by about 0.90% per month. On the other hand, and similarly to the U.S. evidence, longer term analysis reveals that momentum profits dramatically shrink after the first year. This result seems to be more pronounced in the recent period due to slimmer profits in the short and medium term. Independently of the time horizon, we do not find any seasonal effect influencing the magnitude of the continuation effect. Although this issue is not specifically addressed in this study, we believe that unraveling the reasons behind it may be a source of fruitful future research. Second, we analyse the persistence of the above results, adjusting momentum profits by a number of possible risk factors. Both conventional single- and multifactor models are proved to fail in explaining momentum-driven returns. Once documented that the strength of these strategies is not built on differences in risk, we move on, in the attempt to explicitly identify the alternative possible sources of these profits. Bootstrap and Monte Carlo simulations show that momentum strategies carried out on stock returns samples that match all the characteristics of our data while eliminating any time series pattern are nil, implying that continuation effect should come from this latter source. Results are robust to the use of the bootstrap “in block” methodology and hold even when the possible small bias described in JT is taken into account. So, unlike in CK, we provide evidence in favour of the time series component as the main explanation of momentum profits; therefore, we are able to infer that the assumption underlying the behavioural models cannot be rejected. At the same time, these findings do not go in the direction of rejecting the market efficiency hypothesis in explaining momentum profits as often and incorrectly argued in many previous papers. In fact, a question recently and broadly debated in the literature is the possibility that these effects might be captured by more complex time-varying risk models, generally ignored by traditional studies, and that actively contribute to continuously renewing the interest on this issue. Evidences of the presence of momentum profits in equity markets around the world, so different in terms of size, microstructure, and social–cultural background (DeBondt, Schiereck, & Weber, 1999, point to the similarity between German and U.S. results as evidence in support of behavioural models), are in fact inconclusive when considering that these “anomalies” can be easily expressed in terms of common risk factors. On the other hand, our results support the idea that behavioural models coming from the stock returns' time series pattern should not be discarded a priori, as they might tell us a possible “story” to interpret both contrarian and momentum profits.