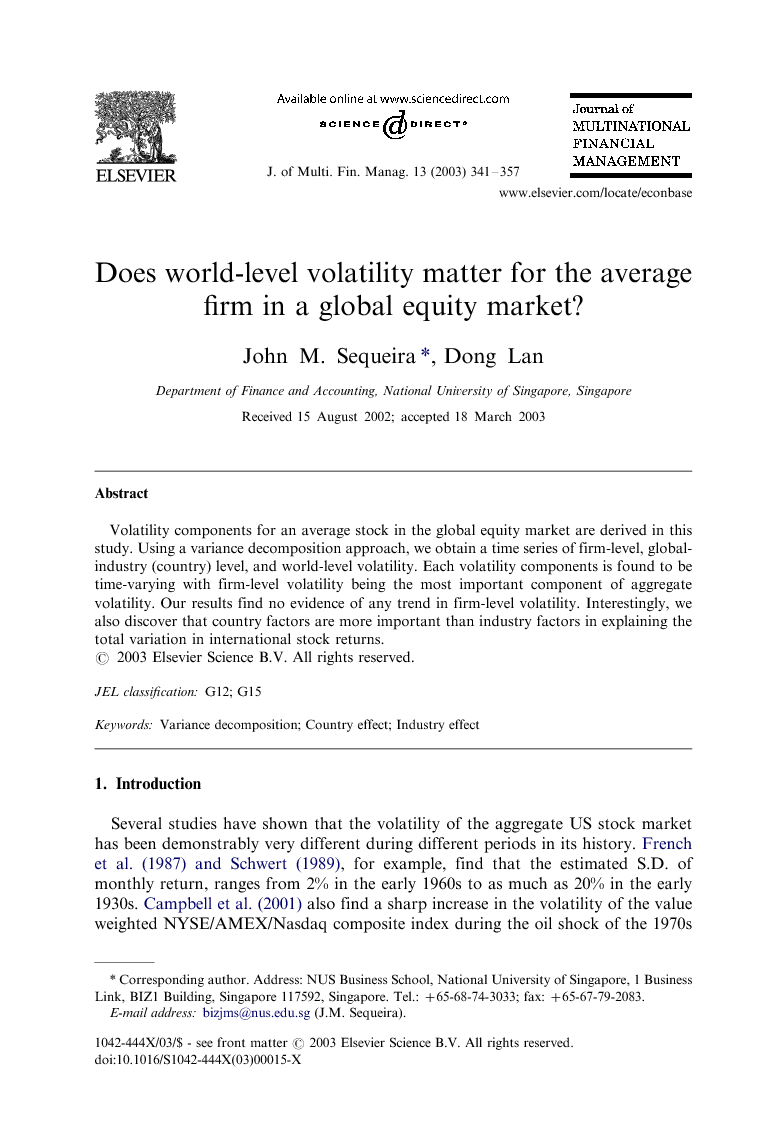 Several studies have shown that the volatility of the aggregate US stock market has been demonstrably very different during different periods in its history. French et al., 1987 and Schwert, 1989, for example, find that the estimated S.D. of monthly return, ranges from 2% in the early 1960s to as much as 20% in the early 1930s. Campbell et al. (2001) also find a sharp increase in the volatility of the value weighted NYSE/AMEX/Nasdaq composite index during the oil shock of the 1970s and again during the stock market crash in 1987. Evidence of time-varying volatility is apparent on a global scale due to the growth of international capital flows and the increasing pattern of market integration seen over the last 30 years. In Harvey (1991) a country's risk exposures are found to explain differences in performance with risk exposures that vary over time. Lin et al. (1994) report that bear markets are contagious at the international level noting that when the US market tumbles, cross-country correlations tend to increase. Additionally, Longin and Solnik (1994) also find that international correlations tend to increase during periods of high market volatility thus reducing the perceived benefits of international risk diversification. Using GARCH models, De Santis and Gerard (1997) show that time-varying gains from international diversification should be based on both the dynamics of nonsystematic risk and the price of market risk, and not just on the correlations between markets. They find that severe US market jumps are contagious at the international level, implying a significant reduction in the gains from holding an internationally diversified portfolio. Roll, 1992 and Heston and Rouwenhorst, 1994 who analyze country and industry effects, arrive at different conclusions regarding the relative importance of these two factors. Although aggregate volatility is very important in any theory of risk and return relationships, aggregate market risk features as just one component of the total risk of an individual stock. Interestingly, several studies find that the behavior of volatility at the aggregated index level is different from the firm-level. French et al., 1987 and Campbell and Hentschel, 1992, for example, find a negative relation between aggregate index return and volatility. Duffee (1995), on the other hand, observes a positive relationship between a firm's stock return and contemporaneous volatility, and a positive relationship between the market return and non-market volatility (namely, industry-level and firm-level volatility). More recently, Campbell et al. (2001) observe an upward trend in volatility at the firm-level with no evidence of a deterministic element for market-level volatility. In this paper, we decompose the stock return in an international market into separate volatility components corresponding to firm-level, global-industry (country) and world-level volatility. We apply the approach in Campbell et al. (2001) that does not require the estimation of covariances of betas for industry, country and firm. This allows us to construct variances for individual components without requiring a specific parametric estimation procedure. Using this approach, we are able to side-step the difficulties encountered in estimating variances based on multivariate volatility models which are typically difficult to estimate due to convergence problems as a result of complicated likelihood functions. Several important results are obtained in this paper. First, we find that the volatility components of stock returns in the international market are time-varying with the October 1987 crash and the 1991 Gulf Crisis having a significant influence on volatility for both developed and emerging markets. These results are consistent with Bekaert and Harvey (1997). Second, the unsystematic variance of the stock return is found to be the most important component of aggregate volatility in the international market, with firm-level volatility forming the largest component of total volatility. Unlike similar studies in the US market, we do not find an increasing trend in firm-level volatility. Instead, all variance components are time-varying with two structural breaks observed over the sample period. The individual volatility components behave differently during the different sub-periods with correlations among industries and countries that are unstable. Finally, country-level volatility is more important than industry-level volatility in explaining the total volatility of stock returns, a result consistent with earlier studies. The rest of the paper is organized as follows. In Section 2, we describe the model formulation, data and estimation methods. Following this, the empirical results are presented in Section 3. Concluding remarks are given in Section 4.

In this paper, we analyzed the main volatility components of a typical stock in the international equity market over the period 1985–1997. Our main results are as follows. Similar to many earlier studies, we find evidence of time-varying stock volatility in international equity markets. The October 1987 crash and Gulf crisis have had a significant impact on both developed and emerging markets. Second, the non-market variances of stock returns are important components of the aggregate variance in the international market. Firm-level volatility accounts for both the greatest share of total firm volatility on average. We do not find evidence of a persistent upward trend of firm-level volatility in the US market. Instead, the three volatility components that we analyze are time-varying with two structural breaks observed over the entire sample period. These time-varying trends in the variance series suggest that correlations among industries and countries are not stable, and in fact, time dependent. These results show a pattern of behavior that is consistent with recent studies. Fourth, country-level variation is much larger than industry-level variation over the entire sample. In other words, country-level variation has better explanatory power than the industry-level variation, in explaining the total variation of stock returns in the international market. This observation also holds over the period 1995–1997. Unlike Cavaglia et al. (2000) we find that industry effect dominates country effects. These results are consistent with the findings in Heston and Rouwenhorst, 1994 and Griffin and Karolyi, 1998. Volatility is a key factor in any asset allocation decision. In applying the variance decomposition approach in this paper, we have managed to analyze individual volatility components for a typical firm in the international market. An important finding in this paper is the pattern of time series associated with each volatility component, where firm-level volatility has consistently surfaced as the most important component of volatility for stocks that trade in an international market. Our results lend further support to the importance of country as opposed to industry factors in explaining the total variation of stock returns. Understanding these behavior patterns has become an increasingly important task in the face of global stock markets integration. Such is the challenge that will prevail for future research in international finance.