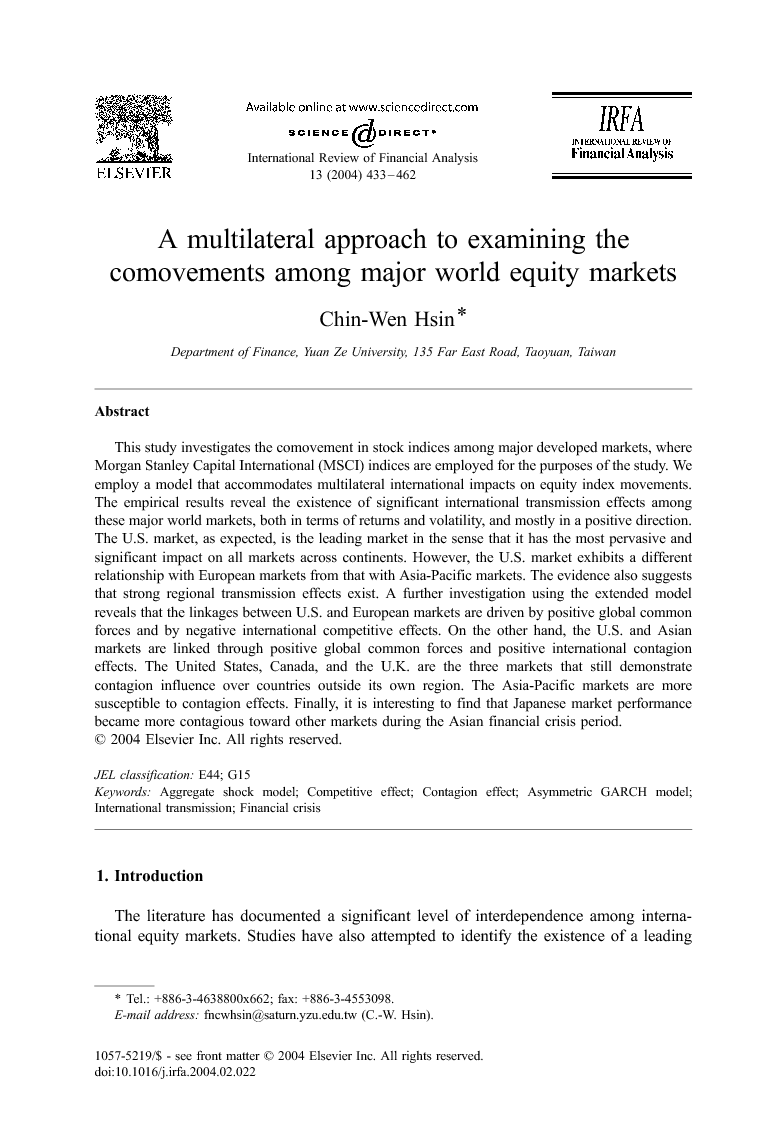 This study investigates the comovement in stock indices among major developed markets, where Morgan Stanley Capital International (MSCI) indices are employed for the purposes of the study. We employ a model that accommodates multilateral international impacts on equity index movements. The empirical results reveal the existence of significant international transmission effects among these major world markets, both in terms of returns and volatility, and mostly in a positive direction. The U.S. market, as expected, is the leading market in the sense that it has the most pervasive and significant impact on all markets across continents. However, the U.S. market exhibits a different relationship with European markets from that with Asia-Pacific markets. The evidence also suggests that strong regional transmission effects exist. A further investigation using the extended model reveals that the linkages between U.S. and European markets are driven by positive global common forces and by negative international competitive effects. On the other hand, the U.S. and Asian markets are linked through positive global common forces and positive international contagion effects. The United States, Canada, and the U.K. are the three markets that still demonstrate contagion influence over countries outside its own region. The Asia-Pacific markets are more susceptible to contagion effects. Finally, it is interesting to find that Japanese market performance became more contagious toward other markets during the Asian financial crisis period.

The literature has documented a significant level of interdependence among international equity markets. Studies have also attempted to identify the existence of a leading market and the factors responsible for the equity market linkages (e.g., see Arshanapalli & Doukas, 1993, Becker et al., 1990, Eun & Shim, 1989, Hamao et al., 1990, King et al., 1994, Koch & Koch, 1991 and Lin et al., 1994). Meanwhile, researchers have had limited success in explaining international comovements as a common response to observable factors.1 In a related study, King and Wadhwani (1990) have proposed a hypothesis that international participants ignore fundamental international economic information and simply focus on price movements in other countries, particularly the United States. This may explain why, on the one hand, it is difficult to explain the international correlation structure with macroeoconmic variables while significant comovements among world equity markets are observed. Empirical support has indeed been found for the overreaction explanation using a contagion model in which pricing mistakes motivate the international correlation structure. Following King and Wadhwani (1990), Lin et al. (1994) postulate that information revealed during the trading hours of one market may have a global impact on the returns of the other markets. They propose an aggregate shock model that uses a GARCH process to test the international transmission effect, as well as a signal extraction model to separate global factors from local factors. More recently, Forbes and Rigobon (2002) have shown that correlation coefficients are conditional upon market volatility. After adjustment for this bias, they find no increase in conditional correlation coefficients, that is, no contagions, where contagion is defined as a significant increase in market comovement after a shock to one country. This study confirms the importance of simultaneously giving consideration to return and volatility comovements when studying the intensity of return transmissions. Nonetheless, their conclusion of no contagion is derived from their correlation-based definition for contagions. In particular, the empirical literature generally finds that the spillover effects are not symmetric (e.g., see Eun & Shim, 1989, Hamao et al., 1990, Karolyi, 1995, Koch & Koch, 1991, Lau & McInish, 1993 and Lin et al., 1994, among others). It follows that correlation coefficients are limited in terms of capturing the asymmetric transmission effect and, more importantly, the sources of the international transmission may arise from both fundamental common factors and pure contagion effects. The purpose of this study is to investigate stock market comovements among G-7 and major Asia-Pacific developed markets, including the United States, Canada, the U.K., Germany, France, Italy, Japan, Australia, Hong Kong, and Singapore, a total of 10 markets. Morgan Stanley Capital International (MSCI) country indices are employed in this study. We apply the aggregate shock model proposed by Lin et al. (1994). The advantages of this model are that it uses return dynamics that better describe actual market returns, it accommodates the mechanism of volatility transmissions at the same time as the return transmissions, and, more importantly, it simultaneously considers the multilateral impacts of various major markets. This last consideration avoids the spurious observations of transmission effects, as might be recorded in the correlation tests and also makes possible a direct comparison of impact strength. We intend to tackle the following issues with the model applications. First, the significance of the international transmission effect is tested, in terms of both the mean and volatility of market index returns. Many studies have applied ARCH-type models to argue that the phenomenon of volatility spillover results from the integration of world stock markets (e.g., see Bae & Karolyi, 1994, Hamao et al., 1990 and Koutmos & Booth, 1995). In fact, recent studies have interpreted market integration as prices in different markets reflecting the same fundamental information (e.g., see Bekaert & Harvey, 1995 and Werner & Kleidon, 1996). It follows that volatility spillovers actually represent a failure of the market to fully process its information and may signal a violation of market efficiency. Second, this paper also investigates the sources of any international transmission effects that may exist among the markets being studied. Two interrelated issues are of concern here. The first is whether the comovements of international equity markets represent common responses to fundamental global factors or contagion effects in the sense of King and Wadhwani (1990). The second is the choice of global macroeconomic factors, which follows earlier related studies including Bekaert & Harvey, 1995 and Bekaert & Harvey, 1997, Ferson and Harvey (1994), and Harvey, 1991a and Harvey, 1991b. It should also be noted that the correct identification of global common factors requires the appropriate specification of the return generating processes for index returns. The well-documented facts regarding equity return behavior, such as volatility clustering, asymmetric responses in terms of volatility, and holiday effects, will be considered in the index return processes. Finally, this project considers the possible structural changes in return transmissions due to the recent worldwide meltdown in equity markets in response to the 1997 Asian financial crisis. This article is organized as follows. Section 2 outlines the aggregate shock model in its basic form and the measurement of the transmission effects. It also describes the sample data and preliminary index return behavior and presents the results of gross international transmissions. Section 3 attempts to identify the sources of the international linkages through the extended aggregate shock model using global common factors. Section 4 presents the impact of the Asian financial crisis on the international linkages. Section 5 concludes the study.