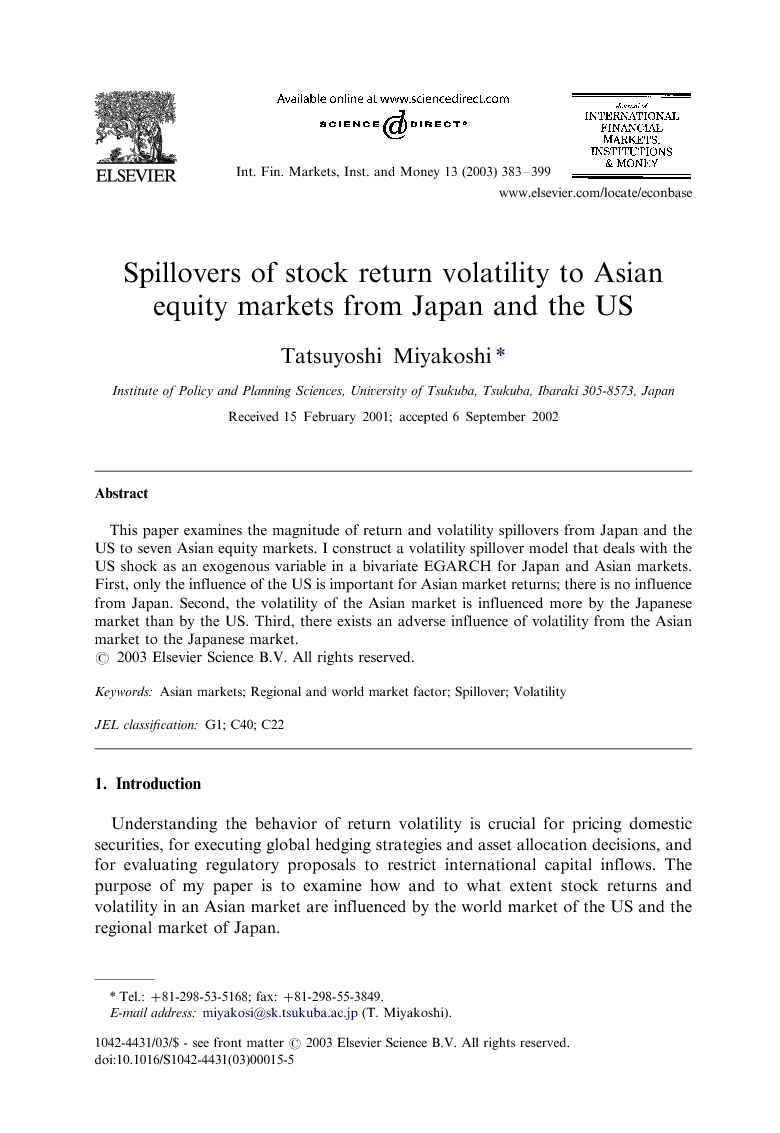 Understanding the behavior of return volatility is crucial for pricing domestic securities, for executing global hedging strategies and asset allocation decisions, and for evaluating regulatory proposals to restrict international capital inflows. The purpose of my paper is to examine how and to what extent stock returns and volatility in an Asian market are influenced by the world market of the US and the regional market of Japan. Most existing studies on volatility spillovers, such as Base and Karolyi, 1994, Karolyi, 1995 and Karolyi and Stulz, 1996, focus on how an American “world” market influences other markets but do not distinguish between influences from regional and world markets. However, Ng (2000) constructs a volatility spillover model by assuming that there are three shocks including local, regional and world, and that each shock is significant. Ng (2000) uses more detailed research than previous papers and clarifies the role of a regional market. Her major contribution is her analyzes on return volatility in Asia. As expected, she finds that for Asian markets the world shock of the US is stronger than the regional one of Japan. Thus, Ng (2000) analyzes a regional and world shock as exogenous variables in the univariate volatility spillover model for the Asian markets. She uses weekly data from January 1975 to December 19961. Recently, a large increase of portfolio and direct investment from Japan to the Asian countries in the latter half of 1990s is shown by the Bank of Japan, 2001b and Ministry of Finance, 2000 official data, except during the period of Asian crisis in 1997. Also, Fornari and Levy (2000) point out that Japanese monetary expansion primarily translates into capital outflows (rather than domestic demand) toward Asian countries. Thus, Japanese international investors have held a large amount of Asian assets and hence the Asian market will affect the Japanese market through the portfolio management of assets of both countries. The analysis for the latter half of 1990s will have to consider the repercussion of the Asian markets, though Japan is a regional market. This strong tie between Japan and Asian markets is worthy of notice. This paper considers a different volatility spillover model from Ng (2000), noting the strong relationship between Japan and Asian markets. For example a world shock of the US is only an exogenous variable in a bivariate volatility spillover model for Japan and an Asian country. In contrast to Ng (2000), this paper insists on the endogenity of the Japanese market shock though Japan may be a regional market against the Asian local markets. Omitting the period during the Asian crisis when stock data displayed the abnormal behavior, but obtaining the sufficient number of data, this paper uses recent daily data from January 1998 to April 2000. This paper draws a major result that a regional factor is stronger than a world one for Asian market volatility, and also considers why the results are different from Ng (2000). In addition, the paper finds the endogenity of the Japanese variables and supports our setting different from Ng. Finally, the paper derives the different policy implication by asking the following question. Can Asian governments and international investors obtain some profits by using signals from a market that opens earlier? This paper is organized as follows. Section 2 presents a bivariate EGRACH model between Japan and each of the Asian countries. Section 3 describes the data set and explains the testable hypotheses. Section 4 discusses the estimation results, and Section 5 concludes.

This paper investigates the magnitude of the return and volatility spillover from Japan and the US to the Asian markets. The major empirical findings are 3-fold. First, only the influence of the US is important on the Asian market returns; there is no influence of Japan. Second, Asian market volatility is influenced more by the Japanese market than by the US. Third, there exists an adverse influence of volatility from the Asian to the Japanese market. In contrast to Ng (2000) study which represents the primary previous research in this field, the results of this study suggest a greater regional influence from Japan on Asian volatility than the world influence from the US and find a new adverse influence from Asia to Japan. The difference of the results between this paper and Ng (2000) stem from the two factors. First, there is a strong economic relationship between Japan and Asian countries through the large amount of portfolio investment during the latter half of 1990s. Therefore, the Japanese variables will be endogenous in our model, as explained in Section 4. Second, there is a structural difference between the models. Roughly speaking, Ng separates the effect of idiosyncratic shocks υAst−12, υjat−12, and υust−12 of Asia, Japan and the US on Asian market volatility hAsAst′ at period t: hAsAst′=hAsAst′(υAst−12, υjat−12, and υust−12). Ng compares the impact of the US and the Japanese shocks on Asian volatility. However, our paper compares the impacts of US market volatility (consisting only of the US idiosyncratic shock υust−12) and Japanese market volatility hjajat−1 (including the previous US shock υust−22) on Asian volatility: hAsAst=hAsAst(hAsAst−1(υust−22), hjajat−1(υust−22), υust−12). Our model does not incorporate the idiosyncratic shocks of the Japanese and the Asian markets. Thus, our paper purely examines the spillover effects of the market volatility, thereby differing from Ng (2000). Therefore, the results of our paper should be carefully compared with the results of Ng. More research for the difference will be needed in future. However, our finding implies that Asian governments and international investors can obtain some profits using signals from a market that opens earlier. At period t in Asian countries, the earliest market in time flow is the US market at period t−1. However, Asian volatility is influenced more from Japanese market volatility at period t−1. Even if the US shock is large (the Japanese government has already stabilized its own market volatility at period t−1), Asian market volatility at period t is small. Symmetrically, the stabilization of the Asian governments for their own markets is needed for the Japanese market. For international investors to get profits from the returns of Asian securities, it is necessary to pay attention on the US (as a world market) directly before. However, implementing global hedging strategies and asset allocation decisions on Asian markets requires the information concerning Japanese volatility (as a regional market) on the previous day. These implication will be different from Ng (2000), since the estimation results are different.