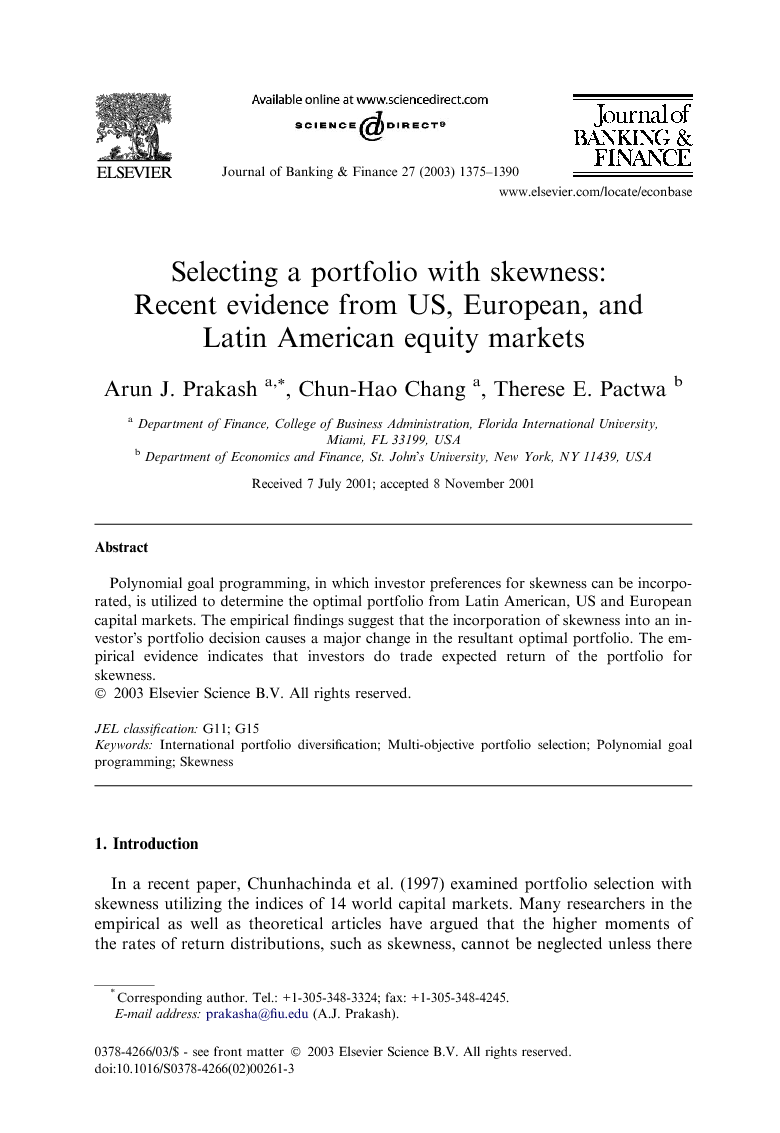 Polynomial goal programming, in which investor preferences for skewness can be incorporated, is utilized to determine the optimal portfolio from Latin American, US and European capital markets. The empirical findings suggest that the incorporation of skewness into an investor’s portfolio decision causes a major change in the resultant optimal portfolio. The empirical evidence indicates that investors do trade expected return of the portfolio for skewness.

In a recent paper, Chunhachinda et al. (1997) examined portfolio selection with skewness utilizing the indices of 14 world capital markets. Many researchers in the empirical as well as theoretical articles have argued that the higher moments of the rates of return distributions, such as skewness, cannot be neglected unless there is reason to believe that the rates of return have a normal (symmetrical) probability distribution and/or quadratic utility function. This is tantamount to the assertion that the higher (more than two) moments are irrelevant to the investor’s decision under uncertainty (see for example Arditti, 1967; Samuelson, 1970; Rubinstein, 1973; Tobin, 1958; etc.). There is ample evidence (e.g., Ibbotson, 1975; Prakash et al., 2001; etc.) that the rates of return do not admit to a symmetrical probability distribution. Furthermore, others have shown that the assumption of a quadratic utility function is appropriate only for relatively low rates of return (Tobin, 1958; Pratt, 1964), which will preclude its use in many cases. As shown by Arditti (1967), an investor’s preference for positive skewness in the rates of return distribution is consistent with the notion of decreasing absolute risk aversion. This is because positive skewness refers to a right-handed, elongated tail for the density function. Positive skewness is desirable, since increasing skewness decreases the probability of large negative rates of return. Based on the previous research (e.g., Kraus and Litzenberger, 1976; Prakash and Bear, 1986; Stephens and Proffitt, 1991), we also assume that the higher moments of rates of return distributions are relevant to the investor’s decision and cannot be ignored. With the consideration of skewness, the portfolio selection problem becomes three-dimensional. The efficient set will now be a function of required minimum expected rates of return, variance, and skewness. As we will see later, an investors’ preference for positive skewness makes the optimal portfolio selection procedure cumbersome and less precise. Perhaps this is the reason that in his Nobel prize speech, Markowitz (1991, p. 471) “…sought as good as an approximation as could be implemented…, thus we (he) prefer an approximated method which is computationally feasible to a precise one which cannot be computed.” He cites a study by Levy and Markowitz (1979) in which reported that the probability distributions and the expected utility functions utilized, the mean–variance efficient frontier approximates expected utility quite well for diversified portfolios. The data studied were annual returns from 1958 through 1967, for 149 mutual funds, and 1948 through 1968, for 97 randomly selected stocks. Markowitz does point out that there is more work to be done, especially mentioning the computational problems when dealing with higher moments. 1 While analyzing the demand for money, Tsiang (1972) claimed that higher moments can be ignored. However, Levy (1974) argues directly against Tsiang’s findings showing that one cannot apply the mean–variance analysis while ignoring all higher moments of the probability distribution. Following Lai (1991) and Chunhachinda et al. (1997), we incorporate an investor’s preference for positive skewness. This necessitates the use of goal programming in portfolio selection. This procedure, goal programming, is a multi-objective technique which analyzes the properties, such as the mean, variance, and the skewness, of the rates of return distribution. The goal programming procedure provides a set of weights for an optimum investment portfolio which addresses the trade-off between competing objectives, such as maximizing the expected rate of return and positive skewness, and simultaneously minimizing the risk (variance). In essence, this research updates the previous work of Chunhachinda et al. (1997) and extends the analysis to include more international capital markets. The major premise of international diversification is a low correlation between the rates of return of domestic and foreign securities. The evidence that international diversification reduces risk is well documented in the literature and is quite uniform. Consistent with the results of the seminal work by Meric and Meric (1989) and Chunhachinda et al. (1997) also found that there exists inter-temporal stability among 14 international stock markets. Note that Meric and Meric utilized the data from 1973 to 1987, whereas Chunhachinda et al. used data from 1988 to 1993. We not only utilize the data from 1993 to 2000, but also include many more capital markets, especially those from Latin America. Furthermore, in our study, we allow the investor to make investment in riskless assets if there are no profitable investment opportunities available to invest in risky assets. This is a point that has not been addressed in the previous studies. The remainder of the paper is organized as follows. A brief literature review of the related concepts and economic justifications is provided in Section 2. In Section 3, we describe the data source and capital markets included in this study. In Section 4, we present the empirical methodology for our goal programming approach to portfolio selection. In Section 5, we provide the conclusion and suggestion for future research.

Previous studies show that investor would consider skewness in their investment decisions. We test the return distributions of 17 international stock market indices for skewness. The evidence indicates that, in general, the international markets, especially those in Latin America, exhibit significant skewness. Therefore, in this study, we examine if the skewness in international markets would affect investors’ portfolio decisions. We present a multi-objective approach to constructing an optimal portfolio of international stock market indices. This approach creates portfolios based on mean, variance and skewness of investment returns. In our study, we utilized two sets of data. The first set utilized the annualized weekly rates of return, while the second set used annualized monthly rates of return. This was necessitated due to the fact that investors may have different investment horizons.13 Therefore, the results obtained using the weekly annualized returns will not be the same as the ones obtained using monthly annualized returns. In fact, in each instance (see Table 3, Table 4, Table 5, Table 6, Table 7 and Table 8), the optimal portfolio combination for monthly returns appeared to be a subset of the weekly returns. Thus, in this paper we confirmed the theoretical results obtained by Levy (1973). When comparing our results to Chunhachinda et al. (1997), there are several apparent differences. Chunhachinda et al. examined weekly and monthly rates of return for the time period January 1988 to December 1993. We examined the rates of return from July 1993 to December 2000. It is obvious that studies done in different time periods will possibly result in different optimal portfolio choices. This study is the first attempt to examine whether a combination of developed and emerging markets will provide more opportunities for investment. Unfortunately, it seems that the developed economies offer better investment opportunities in terms of optimal portfolio selections. In addition, in this research, we explicitly allowed investment opportunities in riskless assets. This is a choice that is always available to an investor to account for changing market conditions.