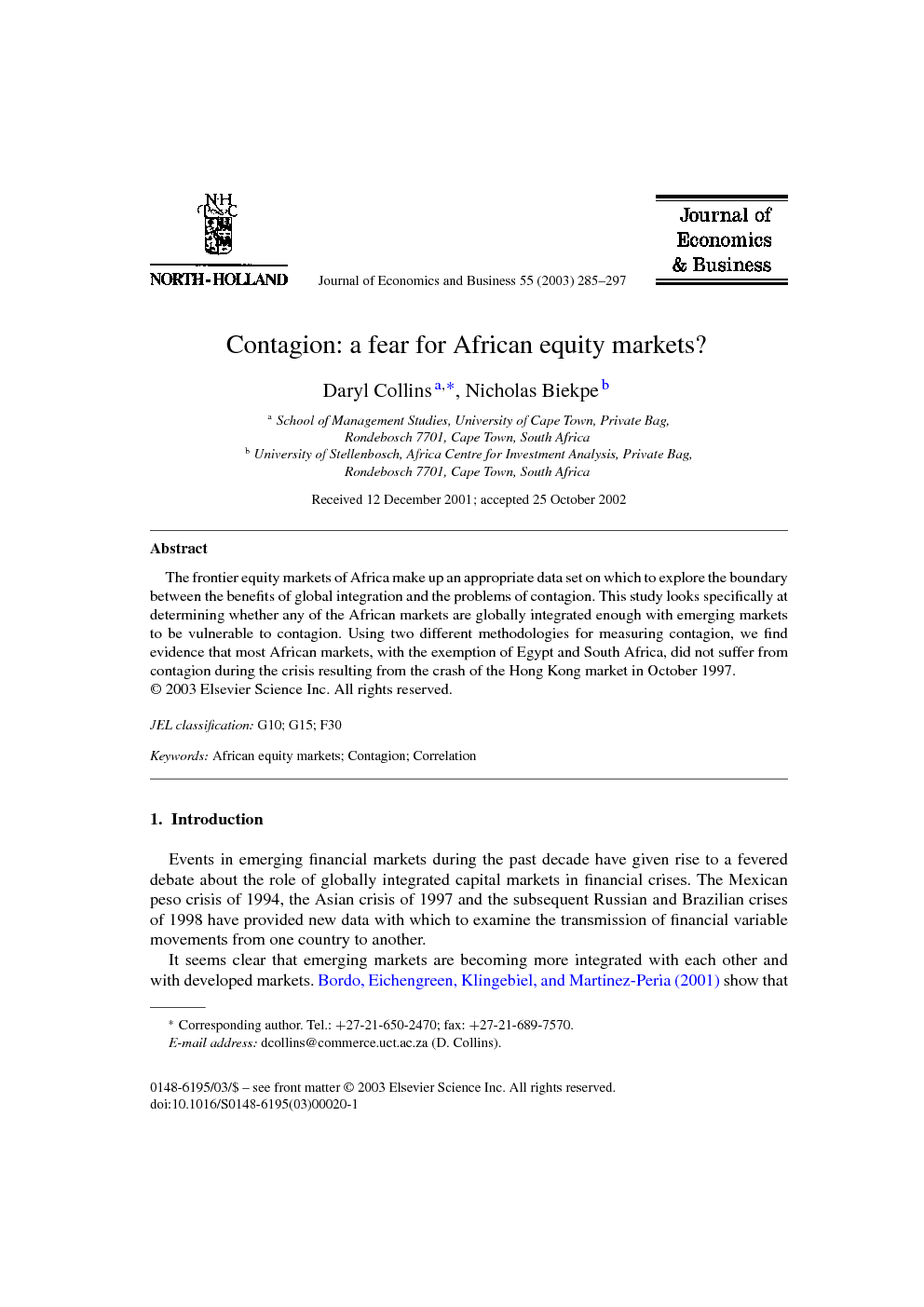 The frontier equity markets of Africa make up an appropriate data set on which to explore the boundary between the benefits of global integration and the problems of contagion. This study looks specifically at determining whether any of the African markets are globally integrated enough with emerging markets to be vulnerable to contagion. Using two different methodologies for measuring contagion, we find evidence that most African markets, with the exemption of Egypt and South Africa, did not suffer from contagion during the crisis resulting from the crash of the Hong Kong market in October 1997.

Events in emerging financial markets during the past decade have given rise to a fevered debate about the role of globally integrated capital markets in financial crises. The Mexican peso crisis of 1994, the Asian crisis of 1997 and the subsequent Russian and Brazilian crises of 1998 have provided new data with which to examine the transmission of financial variable movements from one country to another. It seems clear that emerging markets are becoming more integrated with each other and with developed markets. Bordo, Eichengreen, Klingebiel, and Martinez-Peria (2001) show that global crises have become more frequent since 1973, although they have not been proven more severe than any other age. They find that one reason for the increased frequency of crises is an increase in capital mobility. Short-term capital flows have increased over the past several decades, both absolutely and as a share of total capital flows. That integration may be both a blessing and a curse for emerging market economies. It also leaves policy makers in countries with less integrated markets, such as those found on the African continent, in two minds as to whether to encourage capital flows or to restrict it. Several studies have suggested that increased global integration is beneficial to growth and employment. The reasoning is that when a market becomes financially integrated, companies can access a large new pool of investors. The cost of equity may decline and more investment projects are then viable. For example, Levine (2001) suggests that liberalising restrictions on international portfolio flows tends to enhance stock price liquidity, which in turn accelerates economic growth by increasing productivity growth. In another example, Bekaert, Harvey, and Lumsdaine (2002) show that after integration, equity markets can be larger, more liquid and more volatile, and that the cost of capital declines, credit ratings improve, real exchange rates appreciate and economic growth increases. One conclusion of this work is that integration relies not only on liberalisation but also on the establishment of country funds and/or American Depository Receipts. Another interesting result is that country betas with world markets did not increase 5 years after integration. This suggests that sensitivity to global capital flows can remain low even after integration. Does this mean that there is a point between integration and contagion where an emerging market can experience the benefits of integration without the complications of contagion? Contagion itself can be a difficult concept to measure. It is generally defined as the spread of market disturbances from one market to another. Dornbusch, Park, and Claessens (2000) separate the causes of contagion into two categories. The first type of contagion is caused by a fundamental spillover resulting from the normal interdependence among economies. Examples of this type of contagion depends on fundamental trade and financial links between economies. The second type of contagion cannot be attributed to fundamentals and looks to investor behaviour for an explanation. One example is that declines in asset prices cause large capital losses, which induces investors to sell off securities in other emerging markets to raise cash for redemptions. In a similar way, investors who manage portfolios based on benchmark weightings will keep their weightings the same by selling off assets that have increased in value and thus hold too great a proportion of the portfolio. It is this type of behaviour that penalises more liquid markets. It may also be that investors are imperfectly informed and they might assume (correctly or not) that one country has the same problems as another in crisis. They may take the actions of other investors to make this conclusion. These information asymmetries, particularly in circumstances of high fixed costs in gathering and processing country-specific information, could lead to “herd behaviour”. At a superficial glance, a number of countries could be used as examples of contagion caused by investor behaviour, particularly during the Asian crisis. For international investors to spread contagion, they must be actively investing in the afflicted markets. It would then follow that the spread of a crisis depends heavily on the degree of financial market integration. This reasoning would suggest that the more globally integrated markets are, the higher could be the contagious effects of a shock to another country. Countries that are less financially integrated, either by capital controls or the lack of access to international financing, should then be relatively immune to contagion. How integrated must a market be to be subjected to contagion? African markets, by being less fundamentally involved with other emerging markets and by comprising of a variety of markets of different sizes and stages of development, make a particularly useful sample to explore this question. As Table 1 shows, most African markets, with the exception of South Africa, are relatively small compared to other emerging markets, with lower volume and fewer listed companies.1

On the whole, the results suggest that there is some evidence that the larger and more integrated markets in Africa, which are Egypt and South Africa, suffered from contagion during the Hong Kong crisis of 1997. Our results in Table 3, using the method discussed in Section 2.1, contradict the results for South Africa in Forbes and Rigobon (2002), but a different time period and hypothesis testing method was used in our study. The results in Table 4, using the method described in Section 2.2, suggest that no contagion was evident in African markets, but this methodology does not adequately provide for significant increases in correlation at low levels of correlation. Using a simple t-test, South Africa, Egypt, Namibia and Morocco show contagion during the Asian crisis. We conclude that South Africa and Egypt certainly suffered from contagion from Hong Kong during the 1997 Asian crisis. These results are not entirely unexpected, given the relative size, liquidity and degree of foreign participation in each of the markets within the sample. South Africa and Egypt are the largest and most traded markets in Africa, and therefore are likely to be the most integrated with global capital flows. It would then be expected that these markets would be the most susceptible to contagion. Other African markets are not only smaller and less liquid, but also less accessible to foreign investors because they have no ADRs and are not included in benchmark emerging market indices. If foreign investor participation is a prerequisite to contagion, it would be very surprising if any of the smaller African markets were to show evidence of contagion. A natural extension of this result is that there may be a connection between contagion and financial market integration, which is also dependent on foreign investor participation. However, any conclusive relationship between contagion and integration cannot be reached without a more scientific measure of integration than is suggested by Table 1. The indicators in Table 1 suggests that markets that are relatively large and well-traded are also well-integrated. However, the statistics shown in this table are not always indications of large foreign participation. Using a more exact measure of integration would help answer whether integration leads to contagion or not. With respect to methodology, the results of using these two competing methodologies suggest that the quest for a perfect measure of contagion is not complete. The results on smaller markets were not necessarily consistent with previously done results on larger markets. One difficulty perhaps is that the industry mix in market indices is different from country to country. When a correlation is taken across the entire market, it could be that the similarities or differences in sector weightings are influencing the relationship more than market co-movements. It is in this regard that the choice of the Hang Seng index as a benchmark might be particularly troublesome. The Hang Seng is heavily weighted towards the financial sector, as are South Africa, Egypt and Morocco. Some African markets, such as Kenya, have heavy weightings in consumer goods, like food and beverages, and others, such as Mauritius, have heavy weightings in cyclical services, such as hotels. Emerging markets such as those in emerging Asia and Latin America are heavily weighted towards manufacturing, communications and utilities. It would stand to reason then that the Hang Seng would be prone to having higher correlations with those markets that have a similar sector composition and therefore a similar cyclical relationship with global and local fundamentals. An adjustment that corrects for differences in index composition is beyond the scope of this study, but would be useful for a more accurate measure of both integration and contagion.