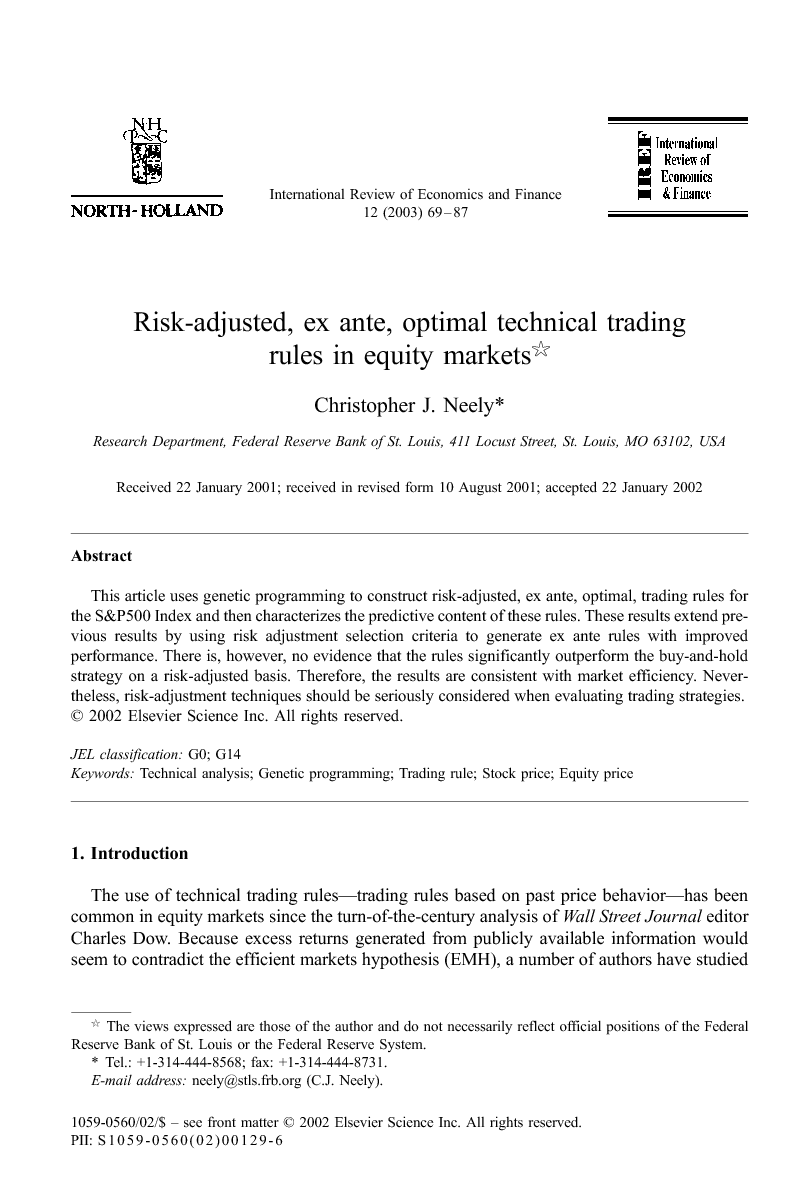 This article uses genetic programming to construct risk-adjusted, ex ante, optimal, trading rules for the S&P500 Index and then characterizes the predictive content of these rules. These results extend previous results by using risk adjustment selection criteria to generate ex ante rules with improved performance. There is, however, no evidence that the rules significantly outperform the buy-and-hold strategy on a risk-adjusted basis. Therefore, the results are consistent with market efficiency. Nevertheless, risk-adjustment techniques should be seriously considered when evaluating trading strategies.

The use of technical trading rules—trading rules based on past price behavior—has been common in equity markets since the turn-of-the-century analysis of Wall Street Journal editor Charles Dow. Because excess returns generated from publicly available information would seem to contradict the efficient markets hypothesis (EMH), a number of authors have studied the usefulness of technical analysis in equity markets Allen & Karjalainen, 1999, Bessembinder & Chan, 1995, Bessembinder & Chan, 1998, Brock et al., 1992 and Lo et al., 2000. Such studies have generally evaluated raw excess returns rather than explicitly risk-adjusted returns, leaving unclear the implications of their work for the EMH. Risk-adjusting the returns is necessary because the technical trading strategies spend time out of the market and therefore have less volatile returns than the buy-and-hold rule. Therefore, simply comparing the returns to each strategy is insufficient to compare the usefulness of the rules. An exception to the failure to adjust for risk is the work of Brown, Goetzmann, and Kumar (1998) that found value in the risk-adjusted returns generated by the market signals of William Peter Hamilton. 1 Another common problem in the trading rule literature is that rules are evaluated precisely because they are widely used by technical traders (see Brock et al., 1992). Ready (1998) argues that testing such rules is a form of data snooping. This practice is likely to produce spurious evidence of technical trading profits; the rules are widely used precisely because they would have been profitable on past data. Rather than evaluating widely used rules, one might search for optimal, ex ante rules with a nonlinear search procedure such as genetic programming (Koza, 1992). Allen and Karjalainen (1999)—hereafter AK—used genetic programming to generate optimal, ex ante, technical trading rules on daily S&P500 data over the period 1929–1995.2 They found that the transactions cost-adjusted returns to these rules failed to exceed the returns to a buy-and-hold strategy—despite the exclusion of dividends from the stock return—and that the market was efficient in this sense.3 There was, however, some evidence of predictability in returns as the rules tended to be in the market during periods of high returns and out of the market during periods of low returns. Although AK attributed this predictability to low-order serial correlation in the stock index, they speculated that the rules might be useful on a risk-adjusted basis despite their lower returns. “Even though the rules do not lead to higher absolute returns than a buy-and-hold strategy, the reduced volatility might still make them attractive to some investors on a risk-adjusted basis” (Allen & Karjalainen, 1999, p. 261). AK did not, however, use any risk adjustment techniques in their work. This article extends the literature by investigating whether ex ante, optimal technical trading rules are useful on a risk-adjusted basis in equity markets. It is not sufficient merely to examine the results from previous genetic programming rules with common methods of risk adjustment. To fairly evaluate risk-adjusted returns, new sets of rules that maximize risk-adjusted measures like the Sharpe ratio (Sharpe, 1966), the X* statistic (Sweeney & Lee, 1990), and the Xeff measure (Dacorogna, Gençay, Müller, & Pictet, 2001) are generated. In addition, this article more fully characterizes the predictability found by these rules and conducts formal tests of market timing (Cumby & Modest, 1987). A central point of this study is that risk adjustment is not a secondary issue; it is absolutely essential both for evaluating the usefulness of trading rules and for measuring the consistency of results with market efficiency Brown et al., 1998, Dowd, 2000, Jensen, 1968, Kho, 1996, Ready, 1998 and Sharpe, 1966. The rules fail to consistently and significantly outperform the buy-and-hold strategy by any risk-adjusted measure. Thus, this exercise extends previous results to find that risk-adjusted, ex ante, optimal rule returns are consistent with market efficiency. The facts that the market indices used here exclude dividends and that some predictability may be due to spurious autocorrelation only reinforce the negative results.

This article has investigated whether ex ante, optimal trading rules created by genetic programming are useful on a risk-adjusted basis. Although risk adjustment improves the relative attractiveness of the rules, neither Sharpe ratios nor Sweeney and Lee's X* statistic, nor Gençay's Xeff measure, nor Jensen's α provide evidence that rules developed by genetic programming would have been useful even to risk-averse speculators, contrary to reasonable speculation. Rules trained on the X* measure had the best risk-adjusted performance by all the measures, approximately equaling the buy-and-hold return performance. Not too much should be made of this result, however. With 15-year in-sample periods—results omitted for brevity—the Sharpe ratio became the best out-of-sample performer, again with performance approximately equal to the buy-and-hold strategy. Of course, risk is difficult to measure and any risk adjustment is subject to criticism. Nevertheless, this article argues that trading rule results must be carefully interpreted in light of risk adjustment. It is likely that the inclusion of dividends in the stock index, the removal of spurious autocorrelation from the index returns or accounting for price slippage would only strengthen the negative results of this exercise.