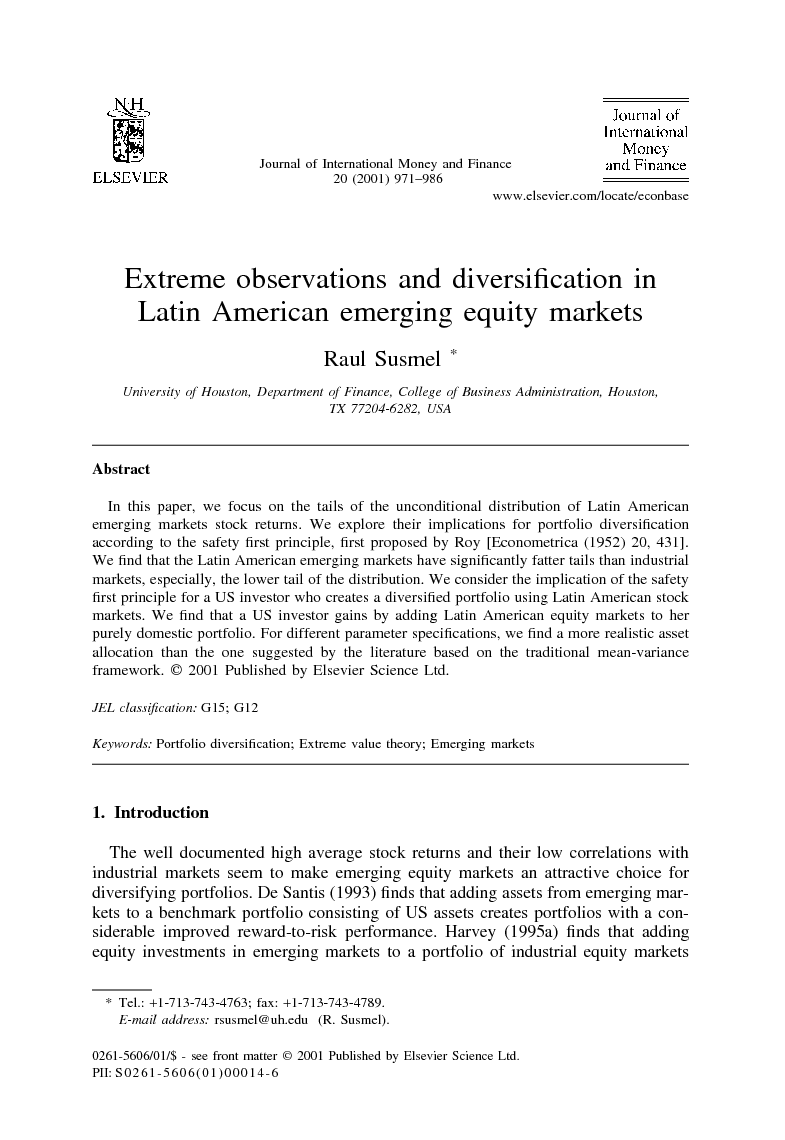 In this paper, we focus on the tails of the unconditional distribution of Latin American emerging markets stock returns. We explore their implications for portfolio diversification according to the safety first principle, first proposed by Roy [Econometrica (1952) 20, 431]. We find that the Latin American emerging markets have significantly fatter tails than industrial markets, especially, the lower tail of the distribution. We consider the implication of the safety first principle for a US investor who creates a diversified portfolio using Latin American stock markets. We find that a US investor gains by adding Latin American equity markets to her purely domestic portfolio. For different parameter specifications, we find a more realistic asset allocation than the one suggested by the literature based on the traditional mean-variance framework.

The well documented high average stock returns and their low correlations with industrial markets seem to make emerging equity markets an attractive choice for diversifying portfolios. De Santis (1993) finds that adding assets from emerging markets to a benchmark portfolio consisting of US assets creates portfolios with a considerable improved reward-to-risk performance. Harvey (1995a) finds that adding equity investments in emerging markets to a portfolio of industrial equity markets significantly shifts the mean-variance efficient frontier to the left. Within the context of a traditional mean-variance context, Harvey (1994) provides a detailed analysis of conditional and unconditional asset allocation that includes emerging markets. He finds that the optimal unconstrained weights for emerging markets increase over time from 40% in 1980 to almost 90% in 1992. The above results seem to contrast with the also well documented ‘home bias,’ see French and Poterba (1991), Tesar and Werner, 1995a and Tesar and Werner, 1995b. In particular, Tesar and Werner (1995b) study US equity flows to emerging stock markets and find that the US portfolio remains strongly biased toward domestic equities. In this paper, we follow Jansen et al. (1996) to explore the implications of the safety first criterion in an international asset allocation context. Roy (1952) introduced the safety first criterion, which was further developed by Arzac and Bawa (1977). Under the safety first criterion, an investor minimizes the chance of a very large negative return, a return that, if realized, would reduce the investor's portfolio value below some threshold level. A safety first investor might be worried about a one-time large event that might drive her or her firm out of business. The safety first rule might be more appropriate for investors investing in emerging markets than in well established markets because emerging markets equity distributions are greatly influenced by extreme returns. 1 As shown in this paper, one of the differences between emerging and industrial markets is the behavior of extreme returns. These observed extreme returns produce a fatter tail empirical distribution for emerging markets stock returns than for the industrial markets. Fat tails for stock returns in industrial markets have been extensively studied. Mandelbrot (1963) and Fama (1965) point out that the distribution of stock returns has fat tails relative to the normal distribution. Mandelbrot (1963) proposes a non-normal stable distribution for stock returns, in which case the variance of the distribution does not exist. Blattberg and Gonedes (1974) and, later, Bollerslev (1987), in an ARCH context, propose the Student t distribution for stock returns, which has the appeal of a finite variance with fat tails. Jansen and de Vries (1991) and Loretan and Phillips (1994) use extreme value theory to analyze stock return in the US. Their results indicate the existence of second moments and possibly third and fourth moments, but not much more than the fourth moment. Jansen et al. (1996), JKV thereafter, and De Haan et al. (1994) use extreme value theory to operationalize the safety first rule in portfolio selection. They show that using extreme value theory allows calculations of the probability of extreme events, even for an event for which there is no in-sample observation. This approach is very useful for decision makers that worry about the possible occurrence of an extreme event. In this paper, we focus on Latin American emerging markets. These markets are of particular interest to US investors. Among emerging markets, they have been the largest recipients of US net purchases of foreign equity from 1978 till 1991, see Tesar and Werner (1995b). De Santis (1993) finds that the Latin American markets are associated with the largest gain in portfolio performance to a US investor who wants to diversify a purely domestic portfolio. In addition, these markets have undergone substantial changes in financial regulations and macroeconomic policies. We find that emerging markets have fatter tails than industrial markets. The tail estimates suggest that the distribution of Latin American emerging markets might not have second moments. Using JKV's methodology, we also find that a US investor gains by adding Latin American equity markets to her purely domestic portfolio. For different parameter specifications, however, we find a Latin American portfolio weight of 15%, which is a more realistic asset allocation than the one suggested in the literature based on the traditional mean-variance framework. This paper is organized as follows. Section 2 briefly introduces the safety first principle and the JKV approach to operationalize it. Section 3 describes the data and performs a preliminary analysis of the series. Section 4 summarizes the results. Section 5 concludes the paper.