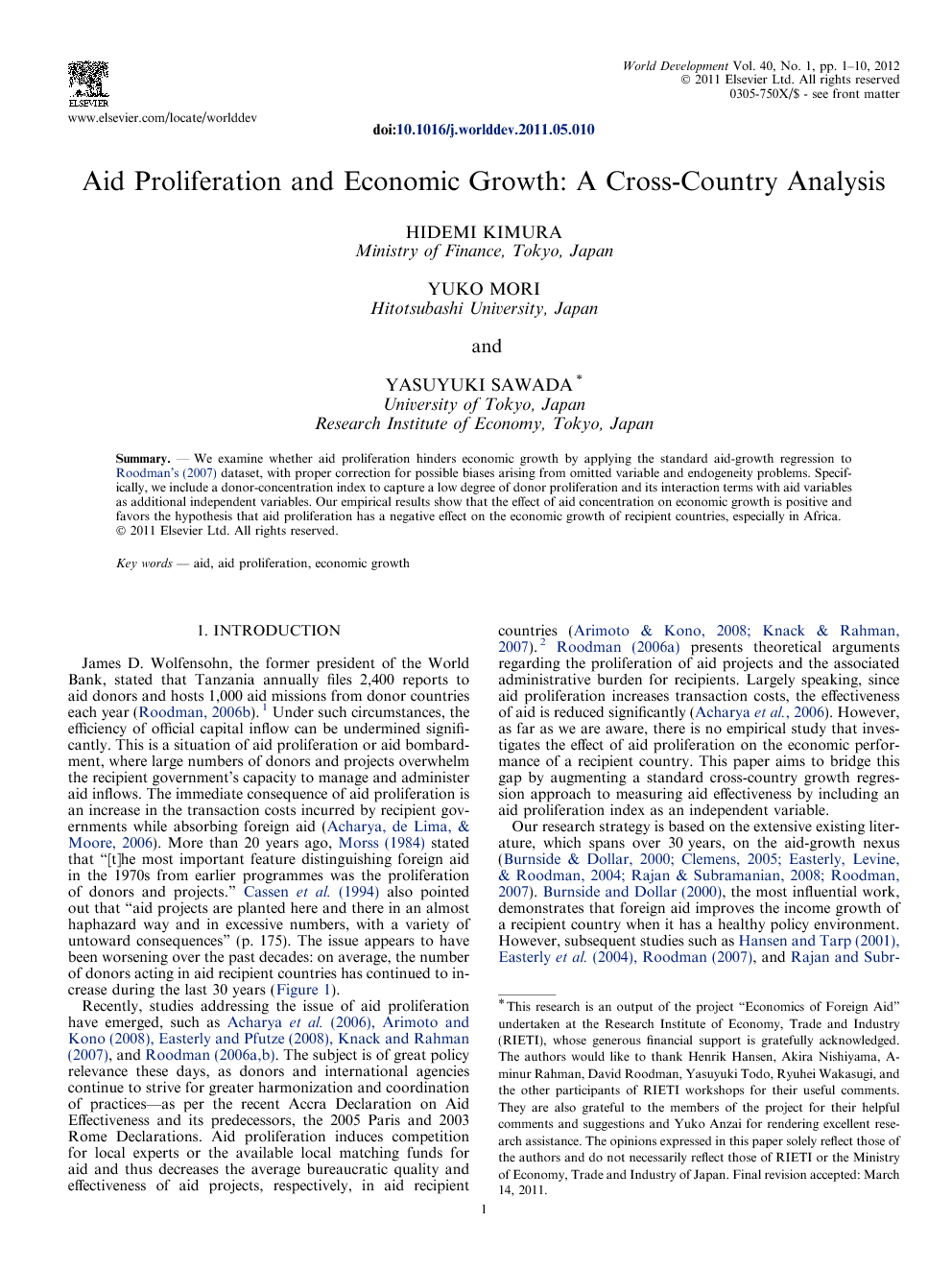 We examine whether aid proliferation hinders economic growth by applying the standard aid-growth regression to Roodman’s (2007) dataset, with proper correction for possible biases arising from omitted variable and endogeneity problems. Specifically, we include a donor-concentration index to capture a low degree of donor proliferation and its interaction terms with aid variables as additional independent variables. Our empirical results show that the effect of aid concentration on economic growth is positive and favors the hypothesis that aid proliferation has a negative effect on the economic growth of recipient countries, especially in Africa.

James D. Wolfensohn, the former president of the World Bank, stated that Tanzania annually files 2,400 reports to aid donors and hosts 1,000 aid missions from donor countries each year (Roodman, 2006b).1 Under such circumstances, the efficiency of official capital inflow can be undermined significantly. This is a situation of aid proliferation or aid bombardment, where large numbers of donors and projects overwhelm the recipient government’s capacity to manage and administer aid inflows. The immediate consequence of aid proliferation is an increase in the transaction costs incurred by recipient governments while absorbing foreign aid (Acharya, de Lima, & Moore, 2006). More than 20 years ago, Morss (1984) stated that “[t]he most important feature distinguishing foreign aid in the 1970s from earlier programmes was the proliferation of donors and projects.” Cassen et al. (1994) also pointed out that “aid projects are planted here and there in an almost haphazard way and in excessive numbers, with a variety of untoward consequences” (p. 175). The issue appears to have been worsening over the past decades: on average, the number of donors acting in aid recipient countries has continued to increase during the last 30 years (Figure 1).Recently, studies addressing the issue of aid proliferation have emerged, such as Acharya et al., 2006, Arimoto and Kono, 2008, Easterly and Pfutze, 2008 and Knack and Rahman, 2007, and Roodman, 2006a and Roodman, 2006b. The subject is of great policy relevance these days, as donors and international agencies continue to strive for greater harmonization and coordination of practices—as per the recent Accra Declaration on Aid Effectiveness and its predecessors, the 2005 Paris and 2003 Rome Declarations. Aid proliferation induces competition for local experts or the available local matching funds for aid and thus decreases the average bureaucratic quality and effectiveness of aid projects, respectively, in aid recipient countries (Arimoto and Kono, 2008 and Knack and Rahman, 2007).2Roodman (2006a) presents theoretical arguments regarding the proliferation of aid projects and the associated administrative burden for recipients. Largely speaking, since aid proliferation increases transaction costs, the effectiveness of aid is reduced significantly (Acharya et al., 2006). However, as far as we are aware, there is no empirical study that investigates the effect of aid proliferation on the economic performance of a recipient country. This paper aims to bridge this gap by augmenting a standard cross-country growth regression approach to measuring aid effectiveness by including an aid proliferation index as an independent variable. Our research strategy is based on the extensive existing literature, which spans over 30 years, on the aid-growth nexus (Burnside and Dollar, 2000, Clemens, 2005, Easterly et al., 2004, Rajan and Subramanian, 2008 and Roodman, 2007). Burnside and Dollar (2000), the most influential work, demonstrates that foreign aid improves the income growth of a recipient country when it has a healthy policy environment. However, subsequent studies such as Hansen and Tarp, 2001, Easterly et al., 2004 and Roodman, 2007, and Rajan and Subramanian (2008) find that the results of Burnside and Dollar (2000) are not robust to alternative specifications, extended data, or estimation methods.3 An emerging consensus seems to be that, at best, there is a small positive, though insignificant, impact of aid on growth (Bourguignon & Sundberg, 2007). Yet, a common feature of these studies is their treatment of aid as being homogeneous regardless of its modality.4Clemens (2005), which examines the effect of short-term aid, is one of the few papers that take into account the heterogeneity of aid quality. Our study also attempts to address heterogeneity in foreign aid, distinguishing the degree of donor concentration from the amount of aid. To preview our findings using Roodman’s (2007) data with proper corrections for possible endogeneity bias, our best empirical results are in favor of the hypothesis that aid proliferation has a negative effect on the economic growth of recipient countries, especially in Africa. The remainder of the paper is organized as follows. Section 2 describes the data and variables, including the aid proliferation index, and then provides the results of the baseline estimation and robustness tests. Finally, in Section 3, we present our concluding remarks along with some policy implications.

This paper investigates whether aid proliferation affects the economic growth of recipient countries by incorporating a donor concentration index and related interaction terms into the regression results of Burnside and Dollar, 2000 and Easterly et al., 2004, and Roodman (2007), which have been widely discussed in the literature. Since Roodman’s (2007) dataset is the most comprehensive of the three datasets considered in this study, we use it to derive our baseline results. Our empirical results are in favor of the hypothesis that aid proliferation has a negative effect on the economic growth of recipient countries, especially in Africa. Aid coordination has become one of the most pressing issues in the current international aid community. On the one hand, the increase in aid volume is still being emphasized, particularly after the Monterrey conference in 2002. However, without close examinations of past aid effectiveness and aid modalities, it is difficult to reach a meaningful agreement regarding increases in the amount of aid. On the other hand, the problems of aid proliferation and the necessity of aid coordination among donors have been recognized widely in the international aid community. The main point is that the lack of international aid coordination leads to the weak ownership and inefficient aid-absorption capacities of aid recipients. This situation hinders the recipients’ growth potential. The importance of aid coordination cannot be underestimated, since not only the current DAC donors but also the emerging donors—who are currently operating outside the international aid coordination framework—are soon expected to play an important role in the aid community. Yet, the main finding of this paper—starting from an initial situation of excessive aid proliferation, more aid concentration is likely to be correlated with higher economic growth—may or may not be consistent with the logic behind aid coordination. If aid coordination leads to aid concentration by reducing transaction costs, then it may promote economic growth. However, if the proliferation problem arises from a free-rider problem among donors as pointed by Rahman and Sawada (2010) and Kimura et al. (2007), aid coordination does not necessarily facilitate growth. In the future, it will be imperative to elaborate on these careful analyses of the role of aid coordination.