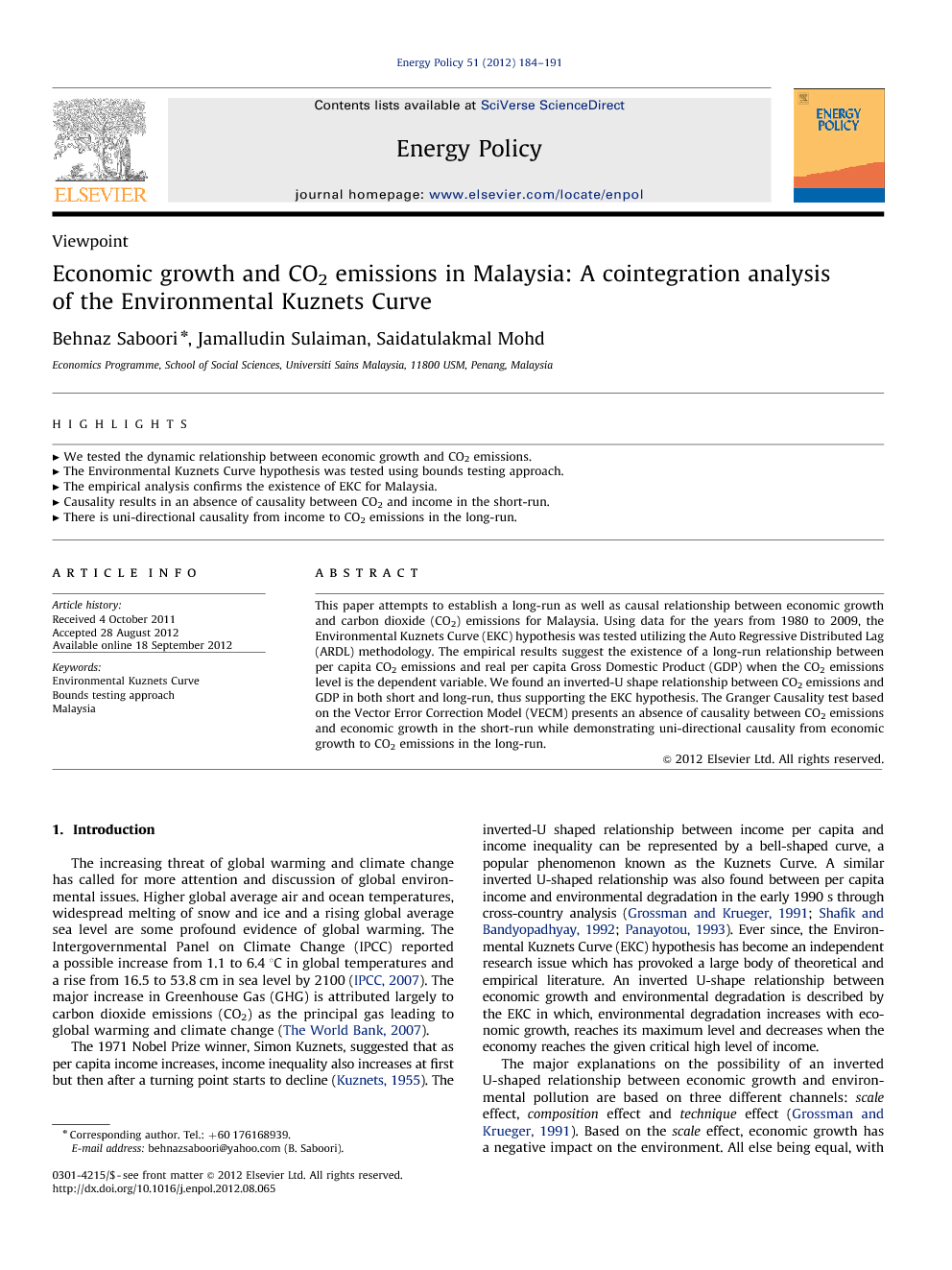 This paper investigated the long-run and causal relationship between economic growth and carbon dioxide emissions based on the EKC hypothesis for Malaysia during the period 1980–2009. Cointegration analysis was conducted using the ARDL approach developed by Pesaran et al. (2001) as well as causality and stability tests. The results obtained suggest the existence of a robust long-run relationship between per capita CO2 emissions and real per capita GDP when CO2 emissions levels are the dependent variable. An inverted-U shape relationship between CO2 emissions and income was found in short and long-run according to time series analysis. Therefore our results support the EKC hypothesis for Malaysia. However despite the above findings, it is noteworthy to recall that this result does not provide much information about the reasons behind observed inverted-U relationship between environmental degradation and income. Factors such as changes in the composition of output, the introduction of cleaner production technology, environmental policies and environmental awareness play significant role in making the decoupling between economic growth and environmental degradation (Panayotou, 1997). This study recommends for a future studies to take into account other potential determinants of CO2 emissions such as energy consumption, foreign trade, urbanization, capital investment and employment to the EKC model. To complement the findings of cointegration analysis, causality tests were also performed to shed light on the causal links between the variables. The results of VECM Granger causality test show the absence of causality between carbon emissions and economic growth in the short run while uni-directional causality from economic growth to CO2 emissions in the long-run. It implies that emission reduction policies and more investment in pollution abatement will not hurt economic growth and could be a feasible policy tool for Malaysia to achieve its sustainable development in the long-run. Carbon capture and storage, carbon emissions tax and carbon-trading scheme can be performed without much concern for long-run income. Of course, these policy tools should be accompanied by other possible strategies such as increasing plant efficiency, employing fuel balancing or fuel switching and making enhanced use of renewable energy. Government of Malaysia has promoted strategies with greater emphasis given to environmental considerations which address global warming and climate change. Being a developing country (non-Annex 1), Malaysia is totally committed to fulfilling its obligations with the Kyoto Protocol by implementing projects that may help mitigate climate change, such as: renewable energy projects through the “Fifth-Fuel Policy’ namely natural gas, coal, hydro, petroleum and renewable energy; industrial energy efficiency; fuel switch to less carbon-intensive fuels (for example in transportation sector, switching to fuels such as hydrogen, palm-diesel and natural gas) and promotion of using biomass energy (from palm oil since Malaysia has become the largest palm oil producer in the world).