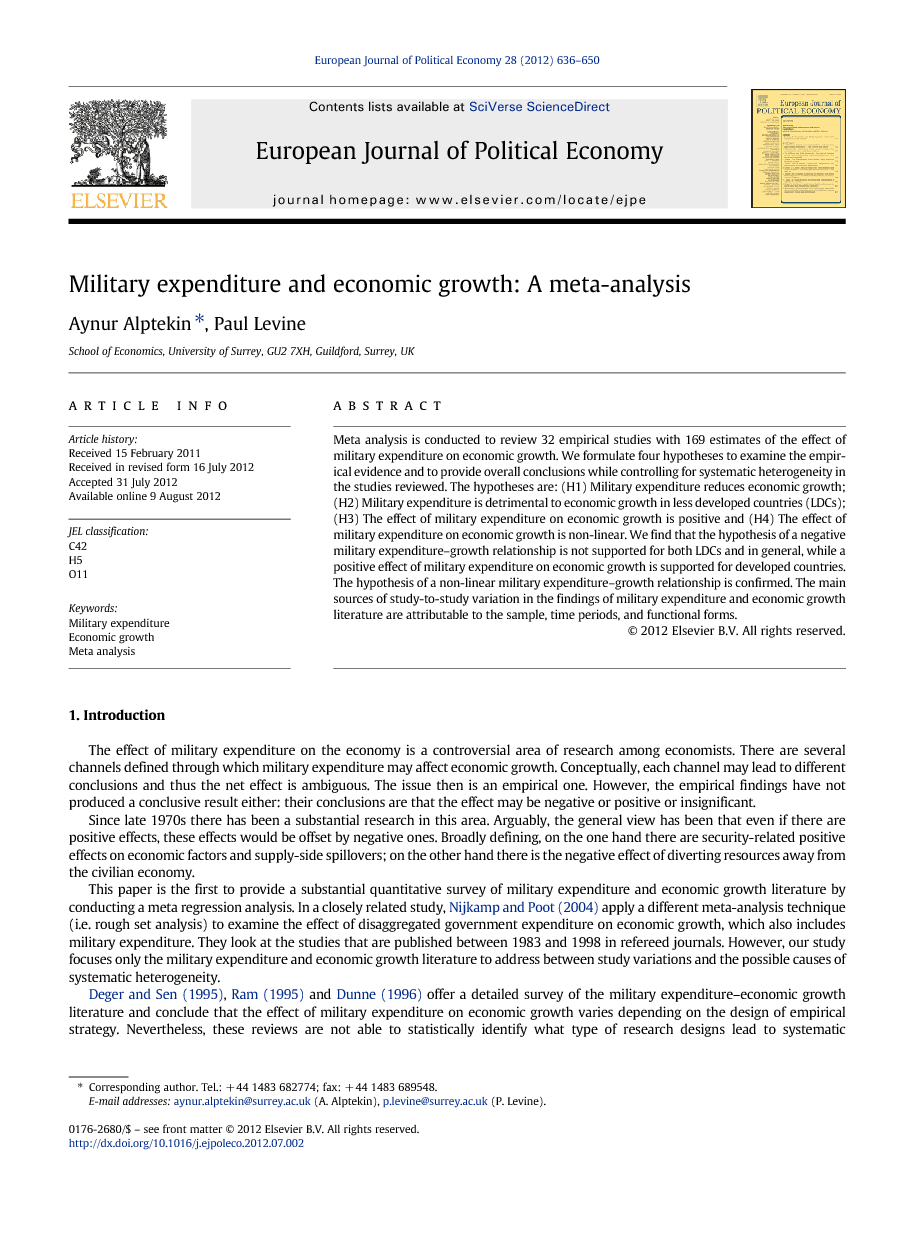 This paper provides a meta-analytic review of military expenditure (milexp) and economic growth literature. It consists of 32 empirical studies and 169 estimates. The following conclusions emerge from the meta-regression analysis (MRA). First, our bivariate and multivariate MRA show that the combined effect of milexp-growth studies is estimated to be positive and ranges between 0.056 and 0.099. Second, the hypothesis of a negative milexp-growth relationship is not supported for both LDCs and in general, while a positive effect of milexp on growth is supported for developed countries. Third, the hypothesis of a non-linear milexp-growth relationship is also confirmed. Fourth, the main methodological differences in the primary studies that contribute to the variations in the findings of the existing literature are the sample, time-periods, and functional forms. To some extent, the findings of this complementary approach support formally the general conclusions of the earlier qualitative surveys, see Dunne (1996) and Ram (1995). We have identified a number of shortcomings in the literature, which may help defining possible routes for future search. First, only a few primary studies of the milexp-growth include more recent time periods. Most of the primary studies use the time period of data covering 1960s, 1970s and 1980s. Therefore, the future research should focus on extending the time periods to cover 1990s and onwards. After all, with the end of the Cold War in 1990s, the perceived threat is reduced across nations and a knock-on effect on milexp seems plausible. Second, although the argument of a negative effect of milexp on growth is stronger for the poorer LDCs, it was not possible to run a separate MRA due to the small sample for this category. Third, as suggested in many recent studies and also in our meta-analysis, the non-linear functional forms appear to be an important issue. Clearly, there is a scope to continue exploring this in future research. Finally, in this MRA, the milexp-growth effect size is the partial correlation coefficient between economic growth and the level of milexp. Therefore, the studies that analyse the growth of milexp and economic growth are left out in this meta-analysis, i.e. the Granger causality and Feder–Ram based studies. Hence, the conclusions drawn from this MRA should be carefully interpreted and a separate meta analysis of Feder–Ram based studies could offer further insights.