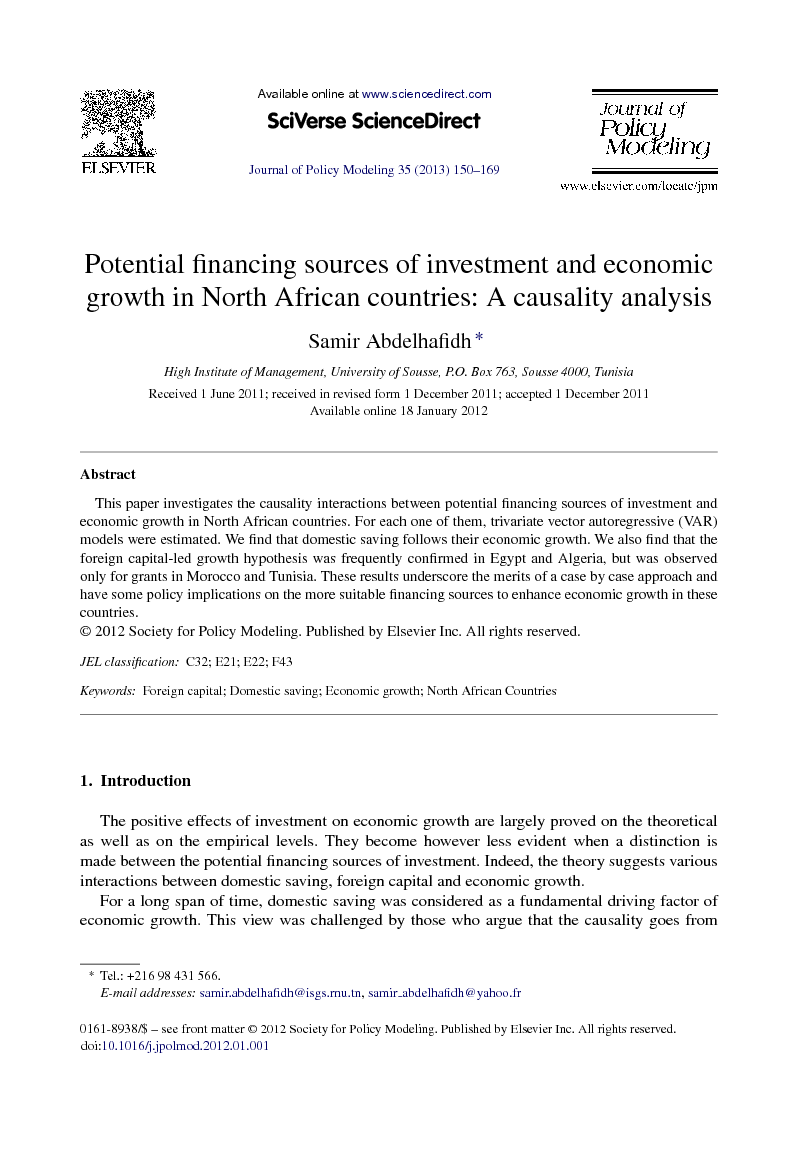 This paper investigates the causality interactions between potential financing sources of investment and economic growth in North African countries. For each one of them, trivariate vector autoregressive (VAR) models were estimated. We find that domestic saving follows their economic growth. We also find that the foreign capital-led growth hypothesis was frequently confirmed in Egypt and Algeria, but was observed only for grants in Morocco and Tunisia. These results underscore the merits of a case by case approach and have some policy implications on the more suitable financing sources to enhance economic growth in these countries.

In this paper, we investigated the causality interactions between investable funds and economic growth in each of Algeria, Egypt, Morocco, and Tunisia over the period 1970–2008. We distinguished in a first step between domestic saving and total foreign inflows. In a second step, foreign inflows were desegregated into grants, FDI, portfolio investment and loans. In subsequent steps, the latter variable was further decomposed by term, by debtor, by creditor, and by category. To identify possible direct and indirect causalities between domestic saving, foreign capital, and economic growth, our empirical methodology was based on trivariate VAR models. Our results underline the pertinence of the case by case approach in the designing of policies related to external and domestic finances and seeking for further economic growth. This applies for both the countries and the potential financing sources of investment. Indeed, we found that (1) domestic saving is a consequence rather than a cause of economic growth in our sample. (2) In Algeria, grants, multilateral loans and bonds are Granger causes of economic growth, but it is the latter that led FDI. (3) In Egypt, grants, FDI, long-term loans, short-term loans, bilateral loans, multilateral loans and bank loans are all Granger causes of economic growth, and reverse causalities from the latter to foreign inflows are also frequently observed. (4) In Morocco and Tunisia, the foreign capital-led growth hypothesis is confirmed only for grants, and it is growth that Granger-causes loans. These results have some policy implications. Indeed, while they strongly reject the traditional wisdom that domestic saving precedes economic growth, we do not deduce that this form of finance is irrelevant for North African countries. The increase of domestic financing sources in these countries remains a central policy issue to finance investment and to avoid the aggravation of balance – of – payments disequilibria and of fiscal deficits. This is particularly true for oil importing countries – i.e. Egypt, Morocco, and Tunisia – where domestic saving remains lower than domestic investment. Our findings also seem to suggest that the foreign capital-led growth hypothesis has the biggest support in Egypt followed by Algeria. Actually, the growth performance may be directly enhanced from a greater mobilization of various foreign capital inflows ranging from grants, to FDI, to long-term loans, to short-term loans, to bilateral loans, to multilateral loans, and to Bank loans in Egypt, and from grants, to multilateral loans, and to bonds in Algeria. Such a policy implication does hold in the sole case of grants for Morocco and Tunisia. However, the mobilization of other forms of inflows may help these two countries to alleviate their financing constraints and to reduce the pressure of their balance-of-payments deficits financing on their exchange rates. Finally, the difference in the causal links between investable funds and economic growth in the four countries provided by our findings may reflect a difference in some other factors as those related to the allocation of these resources. In fact, domestic saving as well as the various forms of foreign capital may finance capital accumulation as well as consumption and productive as well as unproductive investments. These issues suggest some directions for further research on the finance-investment nexus in North African countries.