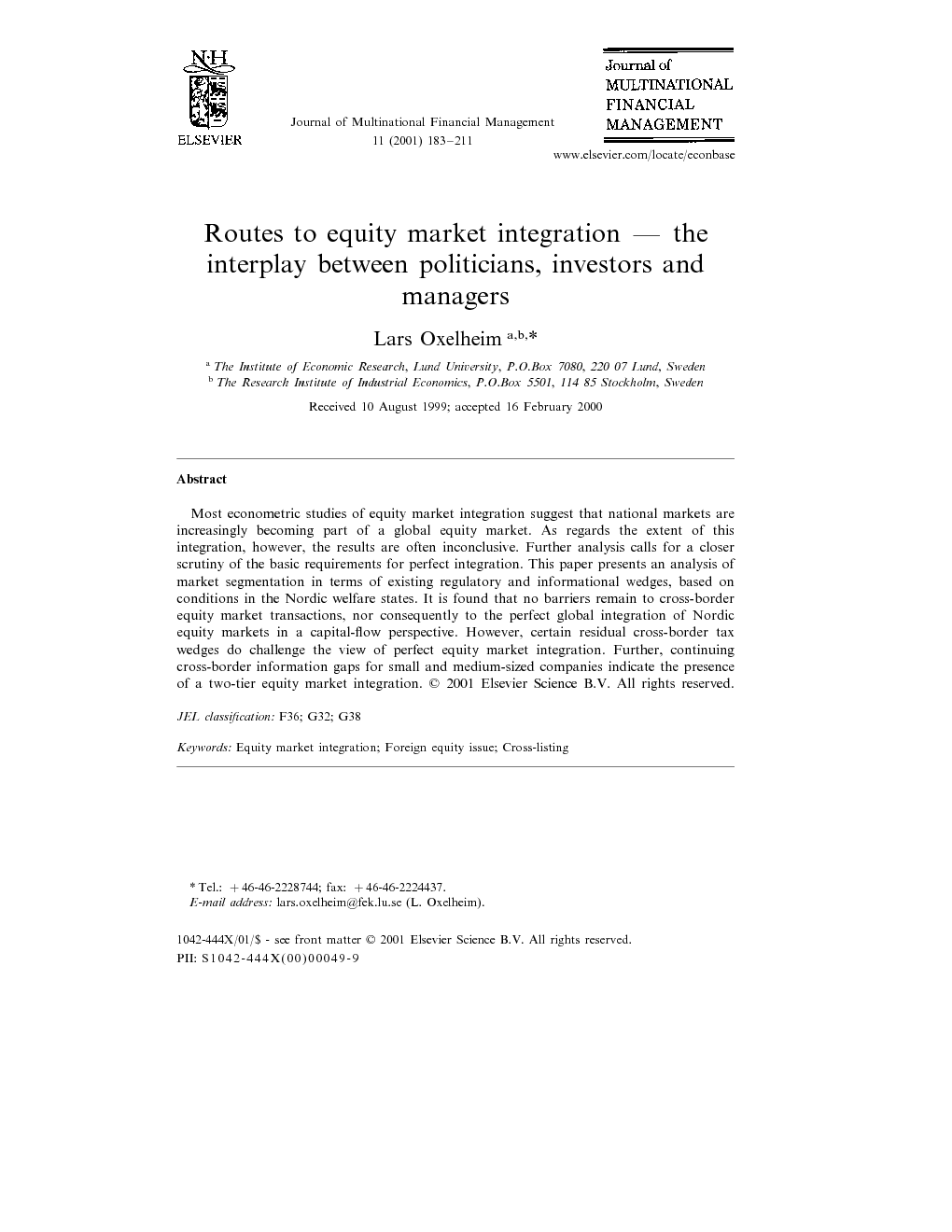 From extensive econometric attempts to estimate the extent of equity market integration it has emerged that the markets are neither segmented nor fully integrated. This paper emphasizes the need for a further analysis of the actual causes of segmentation. The ‘benchmark’ case of perfect integration should meet three prerequisites: no cross-border barriers to equity activities, no internal barriers or distorting tax incentives and no cross-border information asymmetries over and above the company-wise asymmetries. Once these requirements can be said to be fulfilled, the last step will be for the econometricians to test whether or not currency and political risks have been properly priced relative to the global standard. The few published econometric studies of Nordic equity market integration (Mathur and Subrahmanyam, 1990 and Liljeblom et al., 1997) indicate an increasing degree of integration between 1974 and 1993. The empirical observation noted in this paper, based on the complex interplay between politicians/regulators, investors and managers in each individual Nordic market, indicates a strong two-tier integration. The Nordic markets as a whole are not perfectly integrated, but a segment of the market consisting of large companies exposed to detailed scrutiny on the global market, comes very close to it. In a broader perspective, this suggests that econometric studies of integration based on indices are exposed to the ‘ban of the arithmetic mean’, and should be interpreted accordingly. The conflicting results discussed in the introduction may be explained to some extent by differences in terms of the proportions of small and large companies covered by the chosen indices. As regards barriers to cross-border equity activities, the Nordic markets can be said to have concluded their transition from a state of heavy regulation to become integrated parts of the ‘global’ equity market. Remaining restrictions concern the way an activity is conducted. Since the reason behind these restrictions is tax-related, they should be associated rather with the category of internal barriers and incentive-distorting measures. Although the relaxation of taxes on unit trust savings and/or the tax relaxation on dividends and capital income often get the credit for the improvement in the functioning of the Nordic equity markets, a closer examination produces evidence that the general tax structure prevailing in the four Nordic welfare states contributes to segmentation. This is particularly obvious in the case of Sweden (the most liquid of the four markets) with its decision in 1995 to reinstall the full double taxation of corporate dividends. Hence, the second group of prerequisites is not fully met in any of the Nordic countries and contributes to intertemporal variations in the degree of integration. As regards the third category of prerequisites to be met for perfect equity market integration, there still seem to be cross-border information gaps in the Nordic case. Corporate investor relations and investment activities suggest that these gaps are gradually going to be closed. Cross-border listing and issues, and international road shows put on by Nordic companies are examples of active measures of the ‘push’ kind, while foreign companies investing (FDI) or looking for risk capital in the Nordic area, and foreign investors’ portfolio investments in the area, are all examples of ‘pull’ measures. Indirect pressure on the harmonization of the information content of local companies with that of global companies will also ensue, when domestic investors start investing abroad to an increasing extent. An issue that calls for further research concerns the extent to which the malign tax incentives still in operation in the Nordic area affect the level of equity integration of the group of genuinely international Nordic companies. Remaining tax-wedges will have to be modeled in some way or another when the time comes for an econometric test of Nordic equity market integration. Further research should also focus on the mis-pricing contingent on the remaining cross-border gaps between corporate governance models and the scope for the Nordic companies to withstand hostile take-over attempts on the part of foreign and domestic firms. Together with the ongoing globalization of equity markets, the change of attitude among Nordic policy-makers and regulators has triggered a topical debate: should the Nordic national markets form a common Nordic market (like a ‘refuge’), or should they take part in the creation of an EU market place? A joint Nordic market place would be the fourth biggest in Europe in terms of market capitalization. A first step in the direction of co-operation was taken in 1990 with the establishment of NORDQUOTE, which collects and disseminates real time information from each of the four Nordic exchanges via satellite. As a second step a Nordic strategic market alliance was established at the end of the 1990s in response to a corresponding development in other parts of Europe. The alliance NOREX — initially between the Copenhagen and the Stockholm Stock Exchanges — was in early 2000 extended with the Oslo and Reykjavik Stock Exchanges. The Helsinki Stock Exchange has taken a first step in another direction by joining the European derivative alliance EUREX with Frankfurt as its core, thus preventing for the present, from an institutional point of view, an approach towards a single Nordic equity market.