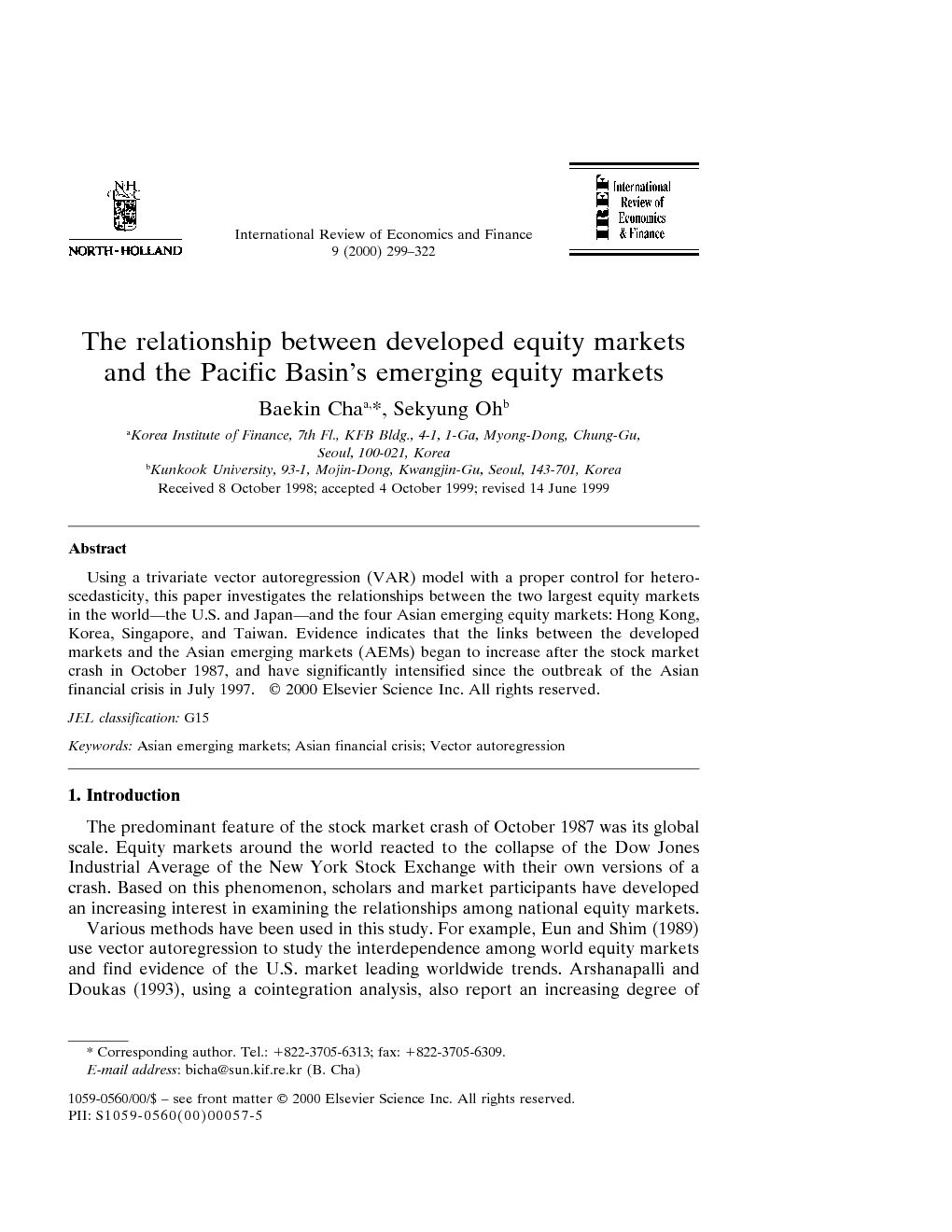 Using a trivariate vector autoregression (VAR) model with a proper control for heteroscedasticity, this paper investigates the relationships between the two largest equity markets in the world—the U.S. and Japan—and the four Asian emerging equity markets: Hong Kong, Korea, Singapore, and Taiwan. Evidence indicates that the links between the developed markets and the Asian emerging markets (AEMs) began to increase after the stock market crash in October 1987, and have significantly intensified since the outbreak of the Asian financial crisis in July 1997.

By using the VAR method with a proper control for heteroscedasticity, this paper empirically investigates the relationship between the following: (1) the four Asian emerging equity markets: Hong Kong, Korea, Singapore, and Taiwan; and (2) the two largest equity markets in the world: the U.S. and Japan. Evidence indicates that the degree of association between the developed markets and the Asian emerging markets (AEMs) began to change after the October Crash of 1987, and that the relationships have been significantly intensified since the outbreak of the Asian financial crisis in July 1997. Following the October Crash of 1987, the U.S. equity market began to have a more significant impact on the Hong Kong and Singaporean markets, though U.S. influence on the Korean and the Taiwanese markets was unchanged. Relatively, the Japanese equity market did not have much impact on the four AEMs until the Asian financial crisis. The impact of both developed markets on the AEMs, however, has dramatically increased since the outbreak of the crisis. Also, in all four AEMs, the responses of return rates to U.S. and the Japanese shocks have become much larger and more persistent since the outbreak of the Asian financial crisis. On the one hand, the results are consistent with existing literature that concludes that the U.S. market is a global factor. On the other hand, the results suggest that an emerging market's sensitivity to shocks from the developed markets is related to its degree of openness. While Singapore and Hong Kong opened up their stock markets early and have guaranteed almost free capital flows in and out, Korea and Taiwan have historically put many restrictions on international capital flows and foreign ownership. Therefore, the U.S. influence could be more directly transmitted to Hong Kong and Singapore before the crisis, and U.S. influence on Korea and Taiwan has increased sharply since the crisis.