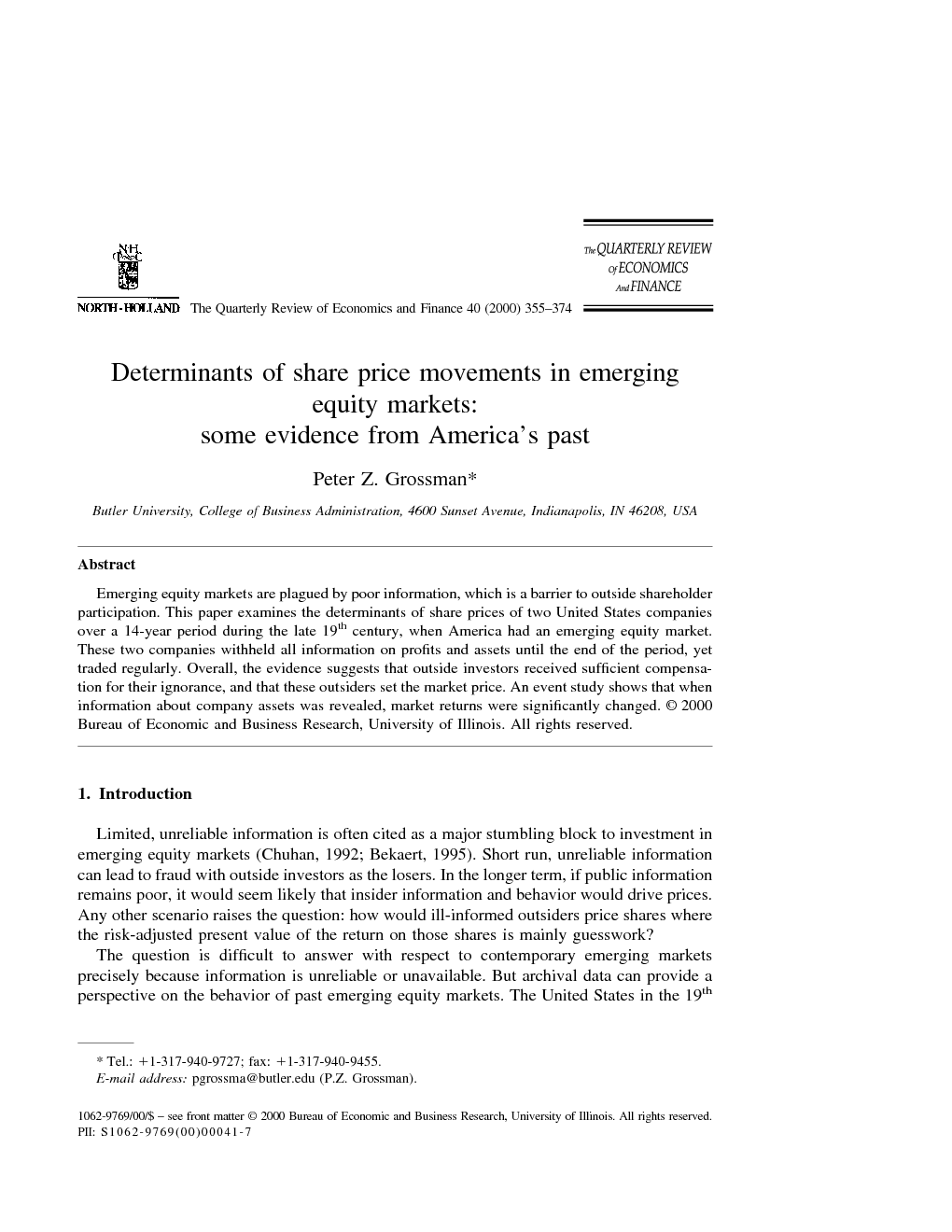 Emerging equity markets are plagued by poor information, which is a barrier to outside shareholder participation. This paper examines the determinants of share prices of two United States companies over a 14-year period during the late 19th century, when America had an emerging equity market. These two companies withheld all information on profits and assets until the end of the period, yet traded regularly. Overall, the evidence suggests that outside investors received sufficient compensation for their ignorance, and that these outsiders set the market price. An event study shows that when information about company assets was revealed, market returns were significantly changed.

Limited, unreliable information is often cited as a major stumbling block to investment in emerging equity markets Chuhan 1992 and Bekaert 1995. Short run, unreliable information can lead to fraud with outside investors as the losers. In the longer term, if public information remains poor, it would seem likely that insider information and behavior would drive prices. Any other scenario raises the question: how would ill-informed outsiders price shares where the risk-adjusted present value of the return on those shares is mainly guesswork? The question is difficult to answer with respect to contemporary emerging markets precisely because information is unreliable or unavailable. But archival data can provide a perspective on the behavior of past emerging equity markets. The United States in the 19th century was an example of such a market1 one that was notoriously plagued by poor information. Baskin (1988), for example, notes that accounting data were often “nonexistent or entirely unreliable” (p. 200). Yet with archival records, we can learn a great deal about the actual assets and cash flows of companies and can observe that information with respect to share price movements over time. In this paper, I examine the share price behavior of two companies, the Adams Express and the American Express, from 1885 to 1898. This is admittedly a small sample, but these two companies (that still exist and trade) had a special distinction: at the start of the period (and for more than a decade previously), they released no public information about earnings and assets. Other firms, such as railroads, did make information on earnings and assets regularly available; 2 it is uncertain just how seriously investors considered published data. For the two express firms, the revenues and profits of which it is now clear equaled those of major railroads (Grossman, 1996), there was virtually nothing to cloud the issue of information reliability; it simply was not available. Moreover, the express provides an interesting test of the importance of information. In 1898, state laws forced Adams Express to reveal publicly the size of its assets. It is hypothesized that this event should have had little effect if all information — including that available only to insiders — had already been accounted for in the stock price. Essentially, I will show in this paper: (1) that share price movements were systematically related to general movements in appropriate markets; (2) that market prices before the 1898 event did not contain all information known to insiders as well as outsiders; (3) that outside investors, who generally set the market price, demanded a substantial premium, probably because they did not have all relevant information; and (4) that the 1898 event, which had no real effect on company cash flows, did notably alter share prices and investor returns. After a brief description of the two express firms and an explanation of how they controlled information, this paper tests for systematic influences and the importance of the 1898 revelation of asset information. For the latter, an event study was run. The results raised several issues including that of efficiency in emerging markets. These issues are discussed in a concluding section.

The results of this study raise several issues. First, the case adds another datum to the vast literature on market efficiency Fama 1970 and Fama 1991, and more particularly to the studies of efficiency in emerging markets (e.g., Civelek 1991 and Gordon and Rittenberg 1995). However, tests in contemporary emerging markets are often problematic because actual data of firms are not reliably known at the time the tests are carried out. This study did not set out to prove efficiency, but by using historical data, the study has been able to explore how well market valuations reflected all possible facts about two 19th century US companies. Clearly, the strongest efficiency arguments must be rejected, because the data suggest that both stocks were systematically undervalued because investors lacked relevant information. It is not immediately clear whether weaker forms of efficiency are in evidence; the precise delineation of efficiency characteristics of these and other historical cases requires further investigation. The study also raises questions about investor behavior: for example, it may be asked why outside shareholders would let themselves be held in ignorance. Or given ignorance, why did they invest? But when the context, as well as the return, is taken into account, the results are not surprising. This was an emerging equity market where information was known to be poor. To invest meant to accept the risk entailed by the lack of information. However, investors were compensated for this particular risk. In other words, the price reflected what was known and what was not known about the companies. 25 Shareholders can be said to have accepted the greater risk of no information on assets or earnings by receiving a high return, which historically proved better than they would have received on a seemingly safer (or at least better understood) alternative such as railway bonds. The study also leads to speculation as to motivation of insiders: why were they willing to let the market clearly undervalue the stock they held? But this, too, has a plausible explanation. As Grossman (1992) argues, insiders believed that by keeping the public generally, and the railroads particularly, ignorant, they gave their companies advantages in setting contract terms with railroads and thus made their firms ultimately more profitable. Insiders also knew if they liquidated their firms, they would be able to realize the value they knew existed. Of course, this meant that if they sold shares before liquidation, they would have failed to gain some of that value. But anecdotal evidence suggests most insiders were individuals who had long-term commitments to the companies in question (Grossman, 1987). Finally, this study of express shares also tells us something about how pricing takes place over time in emerging markets. It seems clear that many of today’s investors in emerging markets (particularly foreign investors) have used the same kind of historical and proxy data used by their 19th century counterparts to determine purchases of emerging market equity issues (Espana, 1995). These issues, like express shares, have also yielded above-average returns (at times), but clearly also have carried significant risks in part because so little about them has been known. It seems that the promise of high returns but the problem of poor information has been driving recent investment decisions in markets such as those of Russia and China. The example of the express shares also shows how risks and returns can change over time. First, investors may find that long-term historical data about how a company’s shares perform relative to various markets and the economy as a whole can provide a basis for estimating a return and a level of risk. Second, data often improve over time for many reasons, legal reporting (as in this case) being but one of them. There are certainly many reasons generally for emerging markets to strive for improvement in the quality of information. Firms that want to attract more outside investment benefit as a rule through more and better information; alternatively, when incentives remain for firms to restrict information, they can continue to compensate outside shareholders for the added risk of ignorance. Either way emerging economies can continue to attract investment and offer viable markets for company shares. , and