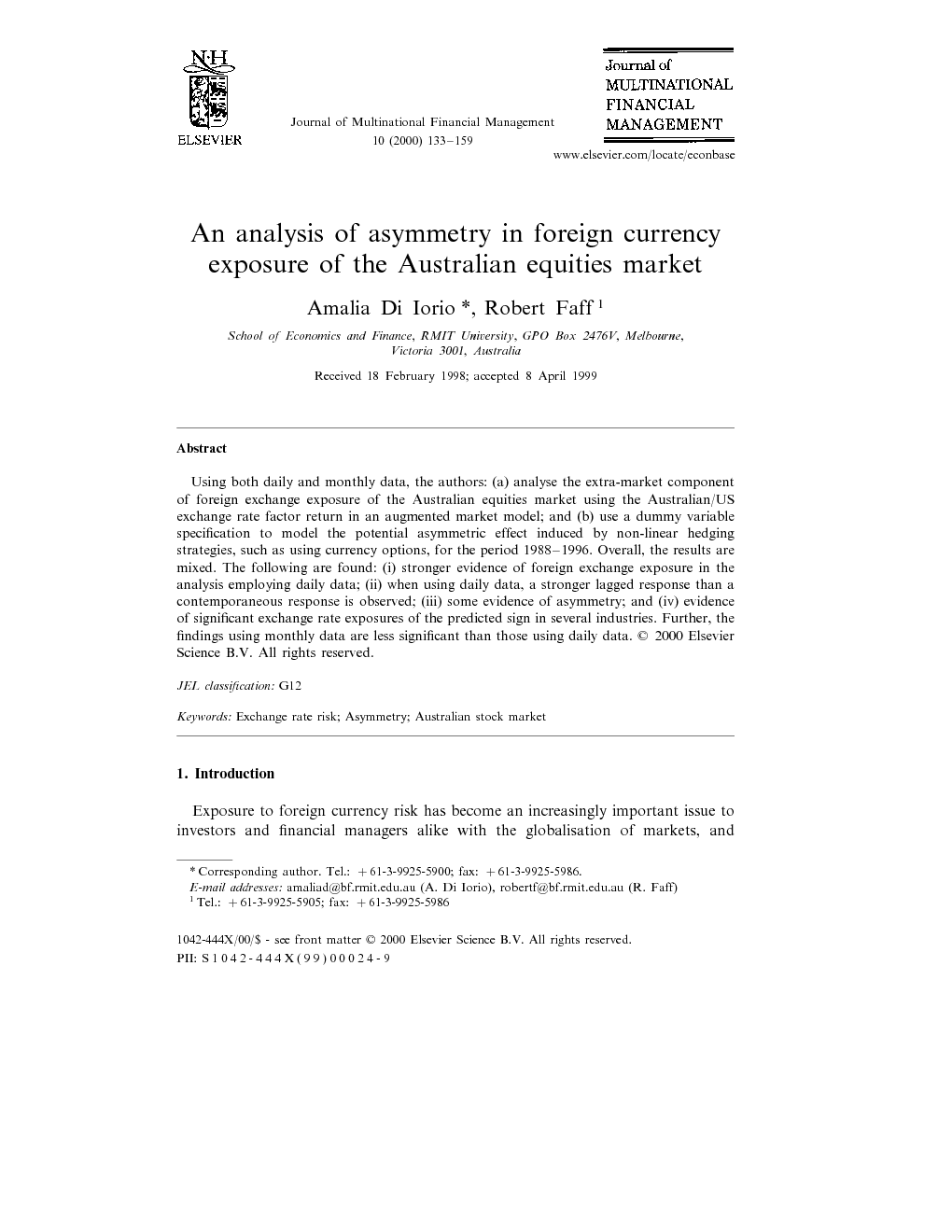 Using both daily and monthly data, the authors: (a) analyse the extra-market component of foreign exchange exposure of the Australian equities market using the Australian/US exchange rate factor return in an augmented market model; and (b) use a dummy variable specification to model the potential asymmetric effect induced by non-linear hedging strategies, such as using currency options, for the period 1988–1996. Overall, the results are mixed. The following are found: (i) stronger evidence of foreign exchange exposure in the analysis employing daily data; (ii) when using daily data, a stronger lagged response than a contemporaneous response is observed; (iii) some evidence of asymmetry; and (iv) evidence of significant exchange rate exposures of the predicted sign in several industries. Further, the findings using monthly data are less significant than those using daily data.

Exposure to foreign currency risk has become an increasingly important issue to investors and financial managers alike with the globalisation of markets, and particularly in the wake of the events that occurred in the Asian financial markets in 1997. Although direct exposure (i.e. transaction and translation exposure) can be effectively managed by well structured hedging strategies, indirect, or economic, exposure provides significant variability in cash flows for most companies world-wide. The impact of foreign currency exposure on the value of the firm has been the subject of analytical literature for several decades (see, e.g. Adler and Dumas, 1984). In recent times some empirical literature has also emerged. For example, Booth and Rotenberg (1990) analyse a sample of Canadian firms for exposure to changes in the Canadian dollar/US dollar exchange rate, while Jorion (1990) investigates the sensitivity of US multinationals to changes in a trade weighted exchange rate. Indeed, Jorion’s analysis provided the impetus for several further studies. This group of studies is well represented by Loudon (1993); Bodnar and Gentry (1993); Levi (1994); Khoo (1994); Chow et al., 1997a and Chow et al., 1997b; Chamberlain et al. (1997); He and Ng (1998); and Chow and Chen (1998). Specifically, the Australian equities market is analysed in Loudon (1993) and Khoo (1994). Both, however, fail to establish a significant statistically sensitive relationship between the stock returns and changes in the exchange rate. These results are consistent with those of many other studies which report, at best, weak evidence of exchange rate exposure (see, e.g. Jorion, 1990, Amihud, 1994 and Bartov and Bodnar, 1994). The inability of many researchers to establish the extra-market foreign exchange rate sensitivity of stocks has been addressed by other financial economists, who attempt to determine the cause of these findings of insensitivity. Some investigate the possibility that the use of monthly data is not an adequate specification to capture the exposure of investors. For example, Chow et al., 1997a and Chow et al., 1997b specify longer than 1-month return horizons and find a statistically significant relationship between stock returns and foreign exchange exposure. In contrast, Chamberlain et al. (1997) report that daily data provides better results of sensitivity than monthly data. These contrary findings add to the interest that the issue of foreign exchange exposure has in finance research and it has resulted in further analysis. Another issue addressed in previous literature is that of the asymmetric nature of foreign exchange exposure due to the hedging strategies implemented by companies. Indeed, while Levi (1994) and Booth (1996) suggest that good hedging ability may in fact be the cause of poor exposure coefficient estimates, Booth (1996) goes on to examine the role of transaction costs and the asymmetry produced in the firm’s profit function in an attempt to provide a more realistic analysis of the use of hedging strategies, specifically currency options, that provide the downside protection while allowing the upside potential. These asymmetric payoffs leads one to hypothesise that exchange rate exposure may display an asymmetric behaviour and it is for this reason that previous studies may not have uncovered overwhelming evidence of exchange rate sensitivity of equity securities. A specific issue of interest when analysing foreign exchange exposure is that of the predicted economic effect of the exchange rate movement. In examining the impact of directional fluctuations in the exchange rate on the returns of various industries, some insight can be obtained as to what the determinants of foreign exchange exposure may be. Bodnar and Gentry (1993) investigate industry-level exchange rate exposure for Canada, Japan and the USA. Using economic theory, they attempt to predict the effect of changes in the exchange rate based on industry characteristics and conclude that an appreciation of the home currency will have a positive impact on the cash flows of: (i) importers; (ii) producers of non-traded goods; and (iii) users of internationally priced inputs but a negative impact on exporters, import competitor goods and foreign investors. Given the issues discussed above, the current study investigates the foreign exchange exposure of the Australian equities market, being one of the most established markets in the Asia-Pacific. More specifically, this study is conducted, using both daily and monthly data, in the traditional unconditional form as well as exploring the possibility that asymmetric effects exist. An augmented market model is implemented using a value weighted domestic market return and an exchange rate return factor is based on the Australian–US exchange rate. Further, this analysis attempts to redress the issue referred to by Ang (1991) that more research of the Asia-Pacific region is essential. This has become increasingly important as a consequence of the recent Southeast Asian financial crisis and the significant and abrupt devaluation on many Asian currencies (including the Australian dollar).2 The remainder of the paper is structured as follows. Section 2 addresses the issue of predicting the foreign exchange exposure across Australian countries, the empirical framework and data is outlined in Section 3, while the results are discussed in Section 4. The analysis is summarised in Section 5.