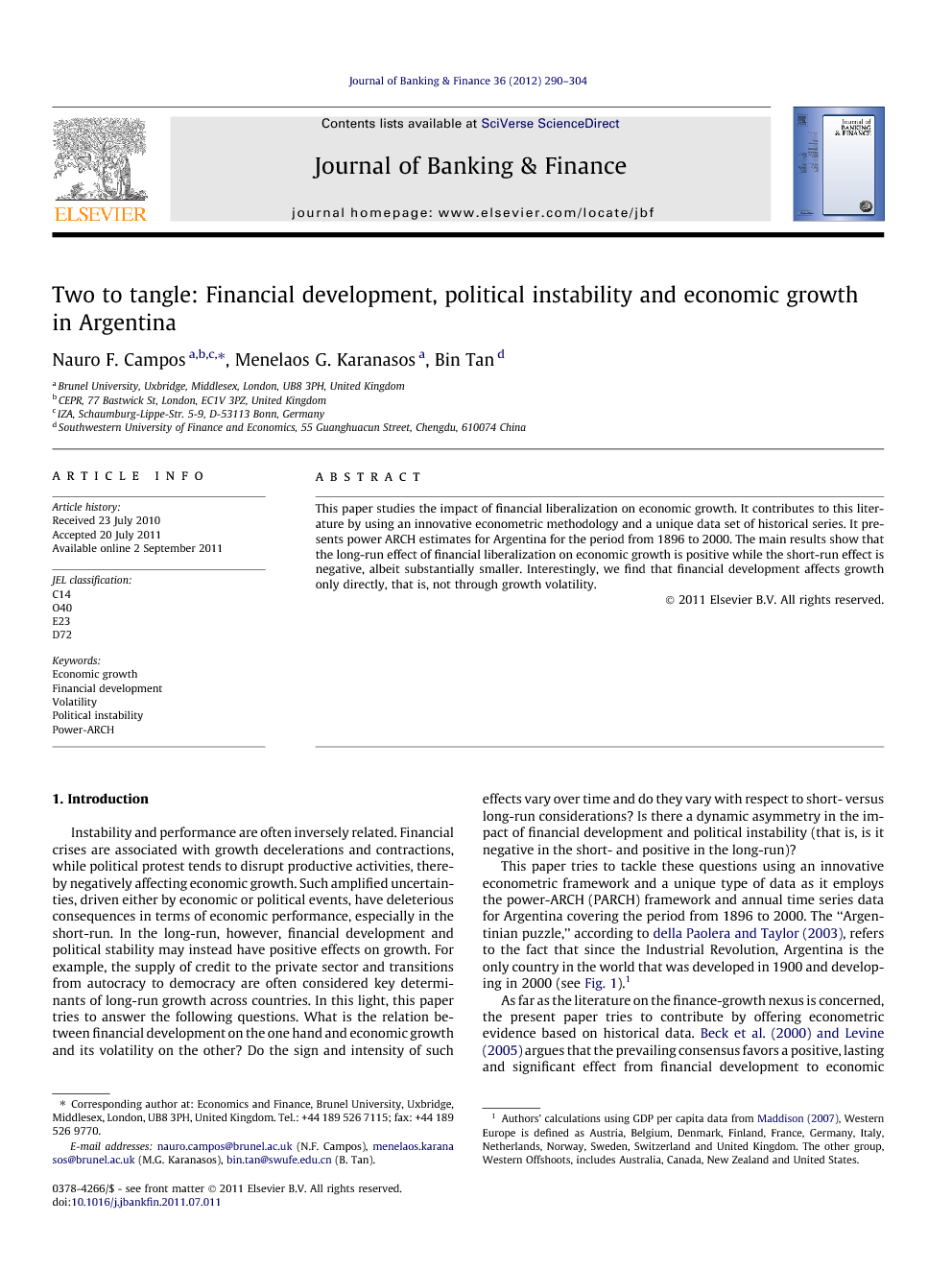 This paper studies the impact of financial liberalization on economic growth. It contributes to this literature by using an innovative econometric methodology and a unique data set of historical series. It presents power ARCH estimates for Argentina for the period from 1896 to 2000. The main results show that the long-run effect of financial liberalization on economic growth is positive while the short-run effect is negative, albeit substantially smaller. Interestingly, we find that financial development affects growth only directly, that is, not through growth volatility.

Within a power-ARCH framework using data for Argentina from 1896 to 2000, we find that: (a) informal political instability (assassinations, guerilla warfare, strikes) have a direct negative effect on economic growth, while formal instability (e.g., cabinet changes and size, and constitutional changes) have an indirect impact on growth (through its volatility); (b) financial development affects economic growth positively; (c) the informal instability effects are substantially larger in the short- than in the long-run; and (d) the financial development effects are negative in the short- but positive and substantially larger in the long-run. These findings raise a number of new questions that we believe may be useful in motivating future research. Here we highlight two related suggestions: one on the role of finance and one on methodology. Regarding the role of finance in the process of economic development, our findings extend a large body of previous research in that we also show a strong, positive impact of financial development on growth in the long-run. However, the negative effects of political instability on growth might outweigh the positive influence of financial development. We find that different forms of political instability affect growth through different channels over different time windows, making up for a strong and rather resilient effect that seems very powerful vis-à-vis the benefits from financial development. Yet Argentina is unique: no other country in the world since the Industrial Revolution went from riches to rags. Put differently, Argentina is an outlier and further research should replicate our analysis using the historical experience of other countries (ideally in a panel setting). That is, future studies should focus on the relationship between political instability, financial development and economic growth in a panel of developing countries. Notice, however, that the data requirements are very heavy indeed, with most developing countries lacking historical data even on key figures, such as per capita GDP, going back to the beginning or middle of the XIXth century. This, of course, does not make this task less important. The second suggestion refers to a possible methodological improvement, namely the application of the bivariate PARCH model to the problem at hand (despite the relatively small number of observations). A joint estimation of the political instability-financial development-growth system in a panel of countries would clearly represent progress and is something we feel future research should try to address.