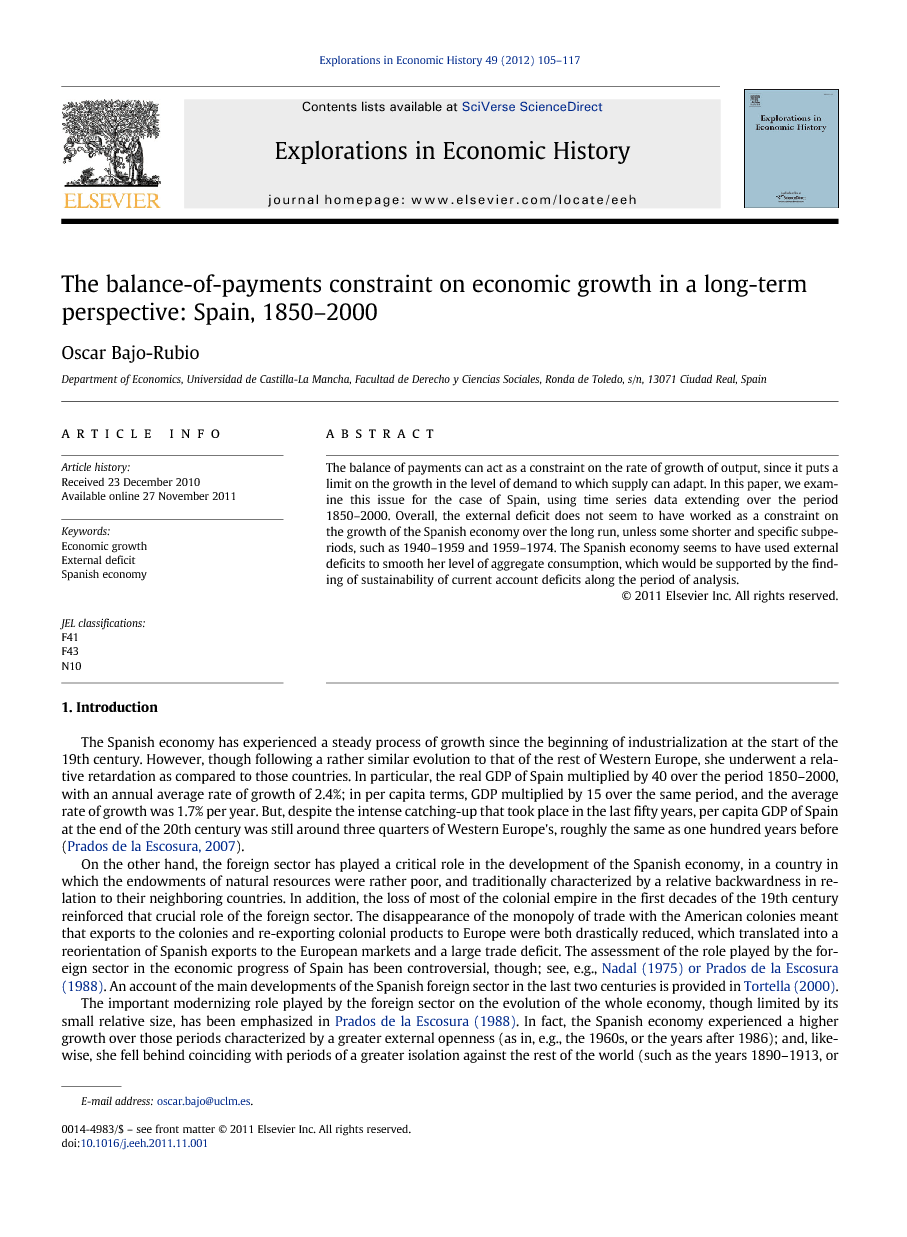 The balance of payments can act as a constraint on the rate of growth of output, since it puts a limit on the growth in the level of demand to which supply can adapt. In this paper, we examine this issue for the case of Spain, using time series data extending over the period 1850–2000. Overall, the external deficit does not seem to have worked as a constraint on the growth of the Spanish economy over the long run, unless some shorter and specific subperiods, such as 1940–1959 and 1959–1974. The Spanish economy seems to have used external deficits to smooth her level of aggregate consumption, which would be supported by the finding of sustainability of current account deficits along the period of analysis.

The Spanish economy has experienced a steady process of growth since the beginning of industrialization at the start of the 19th century. However, though following a rather similar evolution to that of the rest of Western Europe, she underwent a relative retardation as compared to those countries. In particular, the real GDP of Spain multiplied by 40 over the period 1850–2000, with an annual average rate of growth of 2.4%; in per capita terms, GDP multiplied by 15 over the same period, and the average rate of growth was 1.7% per year. But, despite the intense catching-up that took place in the last fifty years, per capita GDP of Spain at the end of the 20th century was still around three quarters of Western Europe's, roughly the same as one hundred years before (Prados de la Escosura, 2007). On the other hand, the foreign sector has played a critical role in the development of the Spanish economy, in a country in which the endowments of natural resources were rather poor, and traditionally characterized by a relative backwardness in relation to their neighboring countries. In addition, the loss of most of the colonial empire in the first decades of the 19th century reinforced that crucial role of the foreign sector. The disappearance of the monopoly of trade with the American colonies meant that exports to the colonies and re-exporting colonial products to Europe were both drastically reduced, which translated into a reorientation of Spanish exports to the European markets and a large trade deficit. The assessment of the role played by the foreign sector in the economic progress of Spain has been controversial, though; see, e.g., Nadal, 1975 and Prados de la Escosura, 1988. An account of the main developments of the Spanish foreign sector in the last two centuries is provided in Tortella (2000). The important modernizing role played by the foreign sector on the evolution of the whole economy, though limited by its small relative size, has been emphasized in Prados de la Escosura (1988). In fact, the Spanish economy experienced a higher growth over those periods characterized by a greater external openness (as in, e.g., the 1960s, or the years after 1986); and, likewise, she fell behind coinciding with periods of a greater isolation against the rest of the world (such as the years 1890–1913, or 1930–1950) (Prados de la Escosura, 2007). On the whole, the lower weight of foreign trade on GDP as compared to the “European norm” (Molinas and Prados de la Escosura, 1989) might explain the relative backwardness of the Spanish economy until the last third of the 20th century. However, some authors have also argued that the trade deficit had been a chronic problem of the Spanish economy, given the traditional weakness of exports, and the need for essential imports such as energy, raw materials, intermediate products, and equipment goods. This, in turn, would have been translated into a subordination of growth to the evolution of the trade balance; see, e.g., Segura and García-Viñuela (1978). The recent availability of long time series for both GDP (Prados de la Escosura, 2003) and the foreign sector (Tena, 2005, Tena, 2007 and Prados de la Escosura, 2010) invites to a re-examination of the relationship between growth and foreign trade for the case of the Spanish economy. In particular, the aim of this paper will be to investigate whether or not the balance of payments would have meant an impediment to further GDP growth over the period 1850–2000. More specifically, we will analyze the two subperiods 1850–1913 and 1940–2000, on the grounds of availability of data on the current account balance (see below); leaving aside the interwar years, characterized by the disruption of the world economic order related to the first globalization. The paper is organized as follows: Section 2 offers a review of the literature on the relationship between external deficit and economic growth, together with the available evidence for the Spanish case; in Section 3 we investigate whether the external deficit was a constraint to economic growth, which is complemented with an analysis of the sustainability of current account deficits in Section 4; finally, Section 5 concludes.