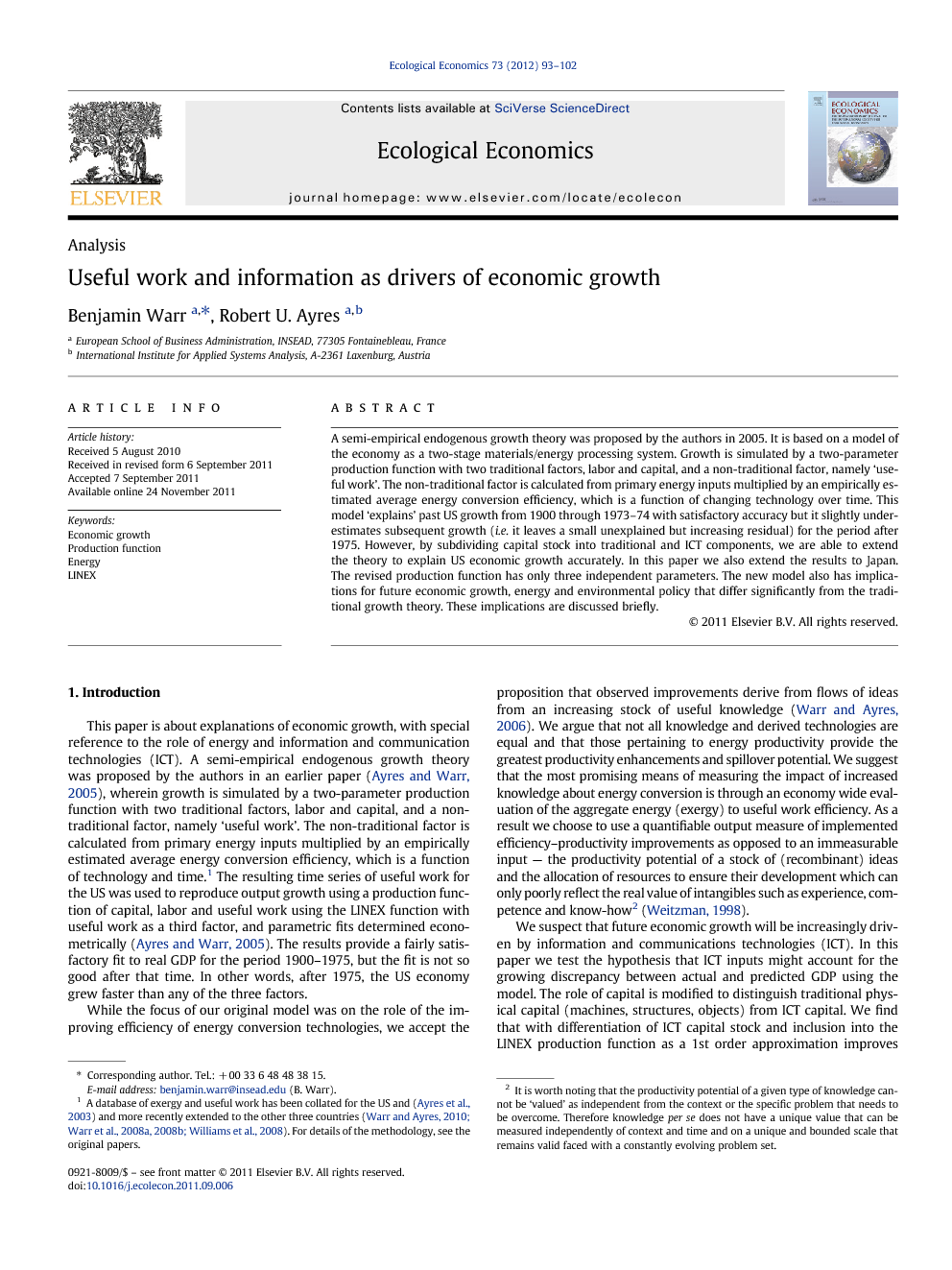 A semi-empirical endogenous growth theory was proposed by the authors in 2005. It is based on a model of the economy as a two-stage materials/energy processing system. Growth is simulated by a two-parameter production function with two traditional factors, labor and capital, and a non-traditional factor, namely ‘useful work’. The non-traditional factor is calculated from primary energy inputs multiplied by an empirically estimated average energy conversion efficiency, which is a function of changing technology over time. This model ‘explains’ past US growth from 1900 through 1973–74 with satisfactory accuracy but it slightly underestimates subsequent growth (i.e. it leaves a small unexplained but increasing residual) for the period after 1975. However, by subdividing capital stock into traditional and ICT components, we are able to extend the theory to explain US economic growth accurately. In this paper we also extend the results to Japan. The revised production function has only three independent parameters. The new model also has implications for future economic growth, energy and environmental policy that differ significantly from the traditional growth theory. These implications are discussed briefly.

This paper is about explanations of economic growth, with special reference to the role of energy and information and communication technologies (ICT). A semi-empirical endogenous growth theory was proposed by the authors in an earlier paper (Ayres and Warr, 2005), wherein growth is simulated by a two-parameter production function with two traditional factors, labor and capital, and a non-traditional factor, namely ‘useful work’. The non-traditional factor is calculated from primary energy inputs multiplied by an empirically estimated average energy conversion efficiency, which is a function of technology and time.1 The resulting time series of useful work for the US was used to reproduce output growth using a production function of capital, labor and useful work using the LINEX function with useful work as a third factor, and parametric fits determined econometrically (Ayres and Warr, 2005). The results provide a fairly satisfactory fit to real GDP for the period 1900–1975, but the fit is not so good after that time. In other words, after 1975, the US economy grew faster than any of the three factors. While the focus of our original model was on the role of the improving efficiency of energy conversion technologies, we accept the proposition that observed improvements derive from flows of ideas from an increasing stock of useful knowledge (Warr and Ayres, 2006). We argue that not all knowledge and derived technologies are equal and that those pertaining to energy productivity provide the greatest productivity enhancements and spillover potential. We suggest that the most promising means of measuring the impact of increased knowledge about energy conversion is through an economy wide evaluation of the aggregate energy (exergy) to useful work efficiency. As a result we choose to use a quantifiable output measure of implemented efficiency–productivity improvements as opposed to an immeasurable input — the productivity potential of a stock of (recombinant) ideas and the allocation of resources to ensure their development which can only poorly reflect the real value of intangibles such as experience, competence and know-how2 (Weitzman, 1998). We suspect that future economic growth will be increasingly driven by information and communications technologies (ICT). In this paper we test the hypothesis that ICT inputs might account for the growing discrepancy between actual and predicted GDP using the model. The role of capital is modified to distinguish traditional physical capital (machines, structures, objects) from ICT capital. We find that with differentiation of ICT capital stock and inclusion into the LINEX production function as a 1st order approximation improves the quality of the historical estimates of GDP. Importantly, the marginal productivities of the factors of production differ markedly from their costs shares in the national accounts with capital taking the lions share, useful work much of the remainder and labor only a very small fraction. The following Section 2 provides an introduction and review of the state of growth theory since the 1950s along with various efforts to deal with faults and gaps in the standard theory, mainly the absence of energy, and the laws of thermodynamics. This seems appropriate, inasmuch as to justify our approach we need to understand the historical reasons for that disconnect. The next Section 3 deals with the thermodynamic inputs to the new theory and discusses our view of the economy as a materials–energy–information processing system. Section 4 discusses the proposed modification to incorporate a role for information/communications technology (ICT) in our previous version of growth theory. Section 5 summarizes the empirical results of the modification. Section 6 discusses implications and offers responses to the usual criticisms.