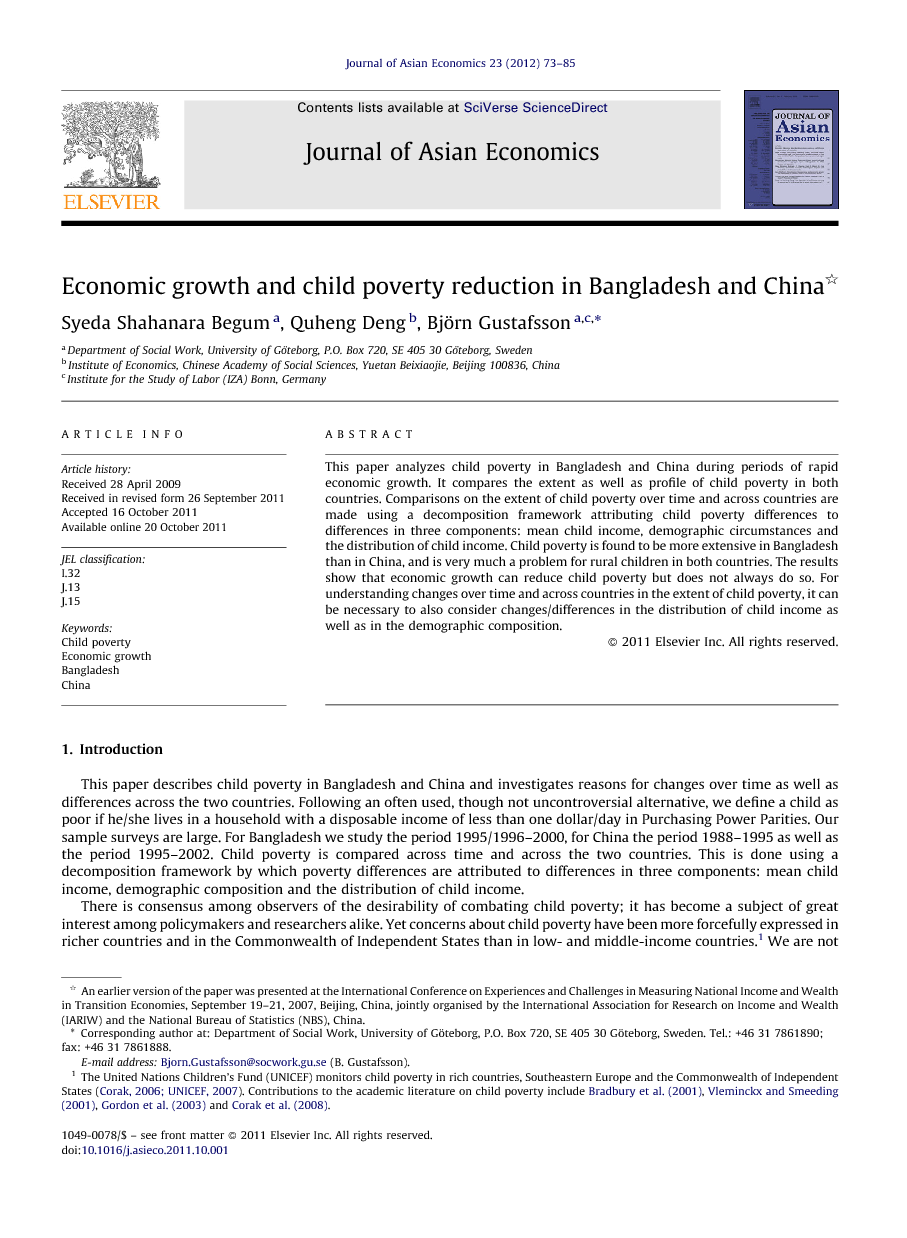 In this paper we have described child poverty in Bangladesh and China as well as investigated reasons for differences across the two countries using harmonised microdata. We have also investigated reasons for changes over time during periods of rapid economic growth in both countries. The study is based on large samples and a poverty line set to one dollar/day. True, this is not the only alternative of defining poverty in cross-country studies. We are aware that in the future the foremost approach could be one in which the international poverty line is set to 1.25 USD per day, and that the issue of how to convert this into local currencies will be solved somewhat differently than the method used in this paper. The comparisons of child poverty were made using a decomposition framework by which poverty differences are attributed to differences in mean child income, demographic differences and differences in the distribution of child income. Child poverty is very much a problem for rural children in both countries. Not surprisingly we have reported that child poverty is more extensive in Bangladesh than in China. Out of the three spells of rapid economic growth studied, child poverty was found to have decreased profoundly during two spells, while much less during a third (China from 1988 to 1995). A more unequal distribution of income in China between 1988 and 1995 largely offset the poverty reducing impulses coming from economic growth. However, in Bangladesh from 1995 to 2000 and in China from 1995 to 2002, economic growth was much in tandem with child poverty reduction. A pattern of child poverty rates being highest in families with many children was found in both countries. Child poverty is negatively related to parental education level in Bangladesh and in China in the mid-1990s and thereafter, but much less so than in 1988. Ethnic minority children are more poverty prone than the majority in China, while the Bangladeshi population is more ethnically homogeneous as are the groups of poor children. The cross-country comparisons show that the lower child poverty rates in China can mainly be attributed to a higher average child income level than in Bangladesh. When trying to understand why in the mid-1990s southwest China had lower child poverty rates than Bangladesh, it was found that differences in demographic composition are central. In southwest China, children lived in families with fewer other children than in Bangladesh. However, a few years later, the difference in the extent of poverty between southwest China and Bangladesh had widened and was now driven by differences in mean income. Our study thus illustrates that economic growth and differences in income levels are significant for child poverty differences over time and across countries. However, it also shows that economic growth does not by necessity lead to a lessening of child poverty. Similarly, differences in mean income are not the only factors that affect poverty differences across countries. In addition to economic growth, changed distribution of income as well as changed demographic composition can affect how poverty develops.