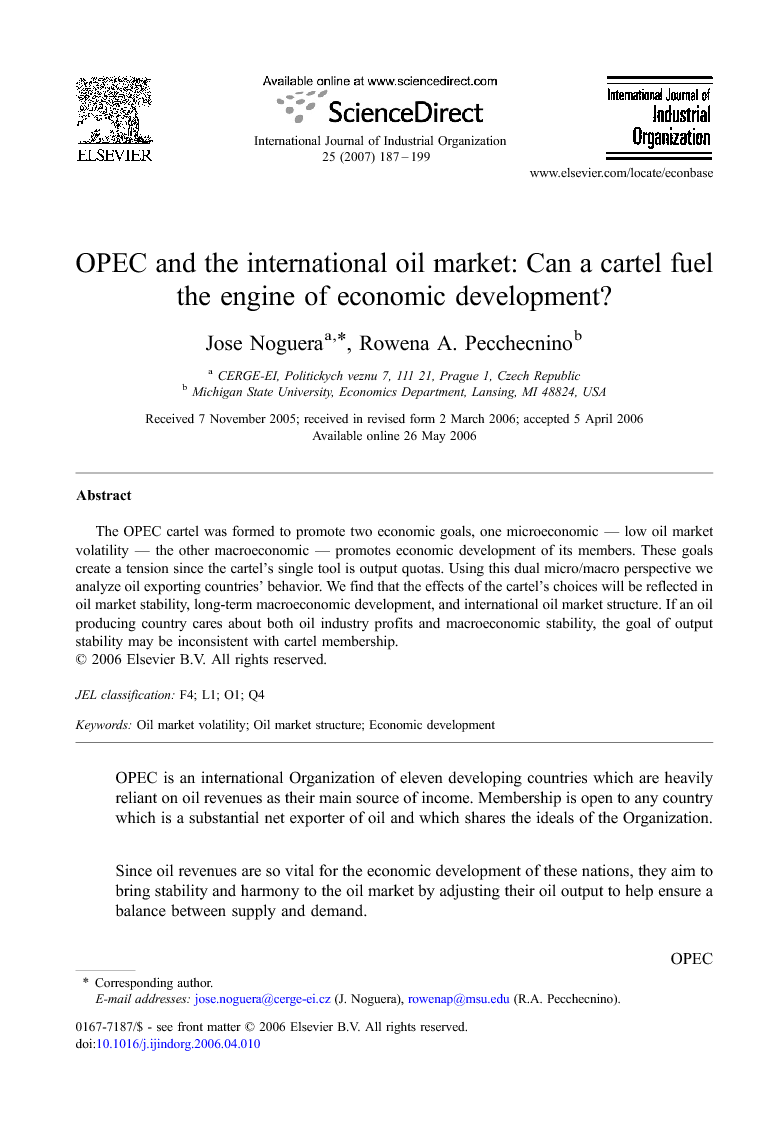 The OPEC cartel was formed to promote two economic goals, one microeconomic — low oil market volatility — the other macroeconomic — promotes economic development of its members. These goals create a tension since the cartel's single tool is output quotas. Using this dual micro/macro perspective we analyze oil exporting countries' behavior. We find that the effects of the cartel's choices will be reflected in oil market stability, long-term macroeconomic development, and international oil market structure. If an oil producing country cares about both oil industry profits and macroeconomic stability, the goal of output stability may be inconsistent with cartel membership.

The OPEC cartel was formed to promote two economic goals, one microeconomic — the minimization of the volatility of oil markets — the other macroeconomic — the promotion of the economic development of its member countries. These two goals create a tension since the cartel has only a single tool, output quotas, with which to achieve these goals. Thus, it is forced to weight them. The effects of its choices will be reflected in the stability of the oil market, in long-term macroeconomic development, and in the states' decisions to join or withdraw from the cartel, that is, in international oil market structure. Using this dual micro/macro perspective we analyze OPEC's sometimes perplexing (see Griffin, 1985, Griffin and Xiong, 1997 and Loderer, 1985) behavior. Specifically, in this paper we ask a straightforward question — is it possible for OPEC to achieve its stated goals? That is, can an international resource cartel using the standard microeconomic pricing and enforcement mechanisms provide a macroeconomic environment conducive to development and growth? Since the oil sector represents an important share of national income for oil exporting, developing countries, instability in the oil market also can lead to instability in output, and through the Phillips curve, instability in other macroeconomic indicators like inflation; in other words, it can lead to macroeconomic instability. Thus, has OPEC been a useful tool explicitly to achieve oil market, and, implicitly, macroeconomic stability? If the answer to both these questions is no, what is the rationale for OPEC to continue to exist? That is, can oil exporting developing countries improve their development prospects by joining an oil cartel? If so, since all substantial oil exporters can choose to join, why do some important exporting countries like Mexico, Oman, Angola and, perhaps, Russia, whose production and development levels are similar to other countries in OPEC, choose to stay in the fringe? What induces countries like Ecuador to enter and then exit shortly thereafter? Why do Mexico, Russia, Egypt and Kazakhstan find membership inconsistent with their domestic macroeconomic policies if membership is, indeed, intended to promote economic development?

A distinguishing feature of the international oil market is that the decision about joining the OPEC cartel is not taken by firms, but by governments that take macroeconomic considerations, namely development and stabilization, into account. This essay studies the issue of whether the cartel has been a useful tool for those purposes in the context of a Stackleberg type model in which oil exporting, developing countries decide whether or not to join the cartel. The model leads to three important conclusions. The first is that countries with a strong preference for current oil revenue, perhaps to fund high levels of current income, join the cartel. The reasons for this preference may vary across countries: in Kuwait, for instance, it may be due to the high population growth rate (4.9% annually during the last 10 years), while in Iraq it may have been due to the need for current income to finance several wars during Saddam's regime. A strong preference for current consumption (low β) is reflected in relatively low investment/output ratios and poor economic performance in terms of long term per capita output growth. This could account for the economic performance in countries like Kuwait, Iraq, Libya, Nigeria, Saudi Arabia or Venezuela, whose investment/output ratios have been less than 20% during the last decade. The decision to join the cartel and the exigencies of cartel, as opposed to macroeconomic, stability has cursed rather than blessed them.