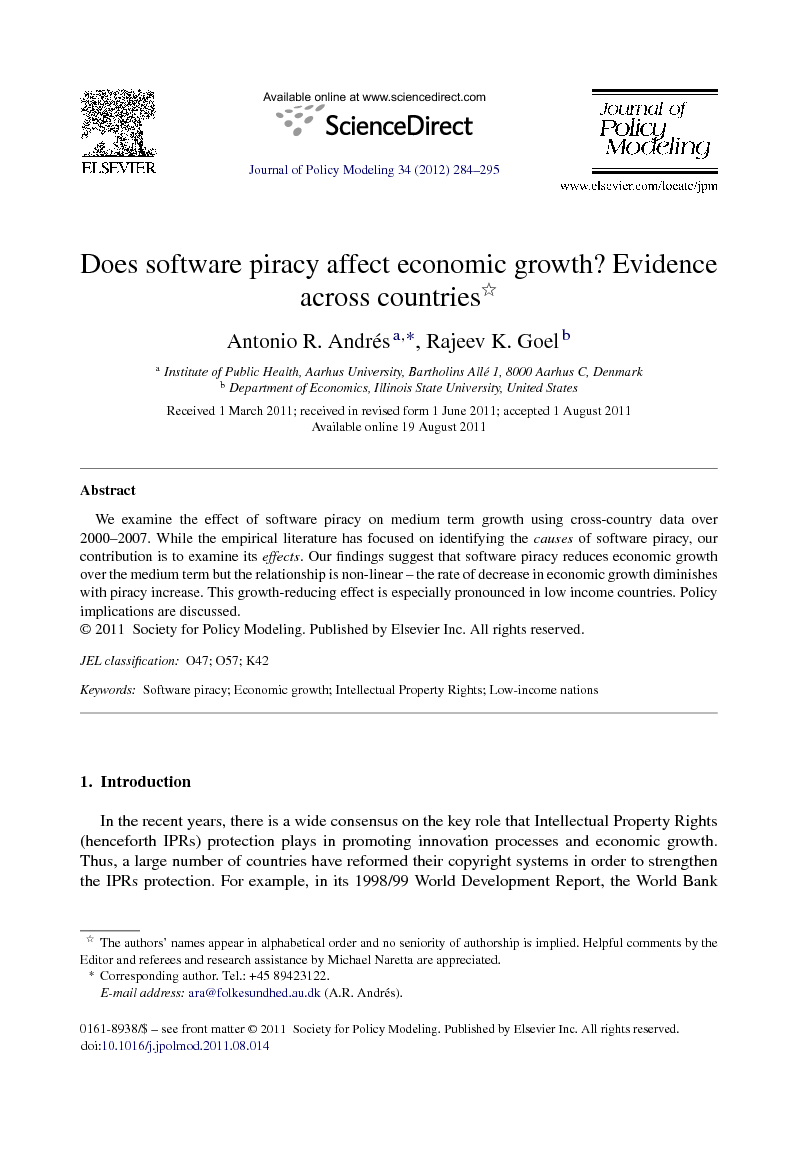 We examine the effect of software piracy on medium term growth using cross-country data over 2000–2007. While the empirical literature has focused on identifying the causes of software piracy, our contribution is to examine its effects. Our findings suggest that software piracy reduces economic growth over the medium term but the relationship is non-linear – the rate of decrease in economic growth diminishes with piracy increase. This growth-reducing effect is especially pronounced in low income countries. Policy implications are discussed.

In the recent years, there is a wide consensus on the key role that Intellectual Property Rights (henceforth IPRs) protection plays in promoting innovation processes and economic growth. Thus, a large number of countries have reformed their copyright systems in order to strengthen the IPRs protection. For example, in its 1998/99 World Development Report, the World Bank emphasizes the importance of stronger IPRs protection as one of the main channels to acquire foreign knowledge, especially in developing countries. This is justified based on the grounds that stronger IPRs protection should enhance economic growth by increasing the returns to innovation, and hence the incentives to innovate. Intellectual property displays many of the features of public goods. That is, they are typically non-rival and non-excludable. Therefore, it becomes necessary to protect them from unauthorized use or access in order to ensure innovators profit from their innovations, which in turn would be expected to impact innovation and economic growth. At the aggregate level, a (broader) strand of the literature has investigated the relationship between the intensity of IPRs protection and economic growth. The empirical literature on IPRs protection has largely concluded that IPRs protection has a positive effect on economic growth, often using cross-section data (see for example, Falvey et al., 2006, Gould and Gruben, 1996, Park and Ginarte, 1997, Thompson and Rushing, 1996 and Thompson and Rushing, 1999). However, the available measures of IPRs protection are only rough measures of overall piracy activities in any particular economy and this research addresses the software piracy-growth linkage directly. The focus here is software piracy because it is also the IT sector's most serious problem (Anthes, 1993) and is one of the most notorious forms of IPRs violations. A substantial recent empirical literature has focused on the socio-economic determinants of piracy rates in several copyright industries (Andrés, 2006, Banerjee et al., 2005, Bezmen and Depken, 2006, Goel and Nelson, 2009 and Peitz and Waelbroeck, 2006 for a review). In contrast, there is scant empirical evidence to validate the basic premise that software piracy might impact economic growth. One of the main motivations of this paper is to empirically test the impact of software piracy on economic growth. There are numerous avenues through which software piracy might impact economic growth. For instance, piracy rates might lower productivity, thereby affecting economic growth (negative effect). But pirated software might be useful in raising productivity and increasing economic growth (positive effect). Further piracy might influence incentives to write software programs, to do software related R&D, and invest in software capital. Piracy reduces the incentives to commercialize as well as innovate. Without adequate IPR protection, programmers will have little confidence in appropriating returns to their efforts, nor will venture capitalists be willing to invest in programs that lack protection (and hence are too risky). Further, greater piracy rates might signal weaker formal institutions (regulations, rules), again affecting growth (see detailed discussion below). The linkage between piracy and economic growth is a key question that underscores the importance of piracy control efforts. The present research examines the (macro) effects of software piracy on economic growth using a large cross-section of countries. Understanding of the piracy-growth nexus is important for the formulation of effective policy. We make the assumption that the rate of software piracy can be seen more generally to proxy for piracy of other goods (e.g., sound recordings, motion pictures, books, etc.).1 For that purpose, we use the neoclassical growth model (Solow, 1956) as the main theoretical model to explain economic growth. In addition to providing evidence on the impact of software piracy on medium term growth during the first decade of the new millennium, this study has a number of innovative elements: (i) the issue of possible nonlinearity between piracy and growth is examined; and (ii) the potential endogeneity of the piracy in economic growth regressions is taken into account. We find that software piracy affects economic growth and the relation is nonlinear – greater piracy decreases growth and the rate of decrease diminishes with piracy increase. Accounting for the reverse-causality between piracy and growth, the earlier findings are reinforced.

Using data from a large sample of countries and employing a fairly standard growth model, this research examines the effect of software piracy on medium term growth. There are various, direct and indirect, means through which software piracy can affect economic growth (Fig. 1). The extant literature has primarily devoted attention to estimating the causes of software piracy (Banerjee et al., 2005, Bezmen and Depken, 2006 and Goel and Nelson, 2009). The present research contributes to the literature by examining the effects of piracy. The answer to the question posted in the title of the paper is yes – software piracy affects economic growth. As expected, greater piracy of computer software lowers economic growth. However, the relationship between piracy and growth is nonlinear – the decrease in economic growth diminishes with piracy (Fig. 2). An explanation for this is that low piracy rates retard growth by reducing investment, but as piracy rates increase, piracy has some positive spillovers via network externalities that dampen the rate of decline in growth. There is thus some threshold piracy level after which increases in software piracy benefit growth by exploiting spillover externalities. This implies that the level of piracy matters in piracy control – the gains from lowering piracy are not uniform across different piracy levels. Further, the negative growth effects of piracy are found to be especially pronounced in the case of low income nations. The results from Table 2 generally hold when allowance is made for potential endogeneity of piracy in Table 3. Investment and education increase growth, while there was little support for the convergence hypothesis. Other things being the same, growth was lower in low income countries – suggesting the presence of some minimum income threshold in order for nations to get on a growth trajectory. From a policy angle, initiatives to boost investment and/or literacy are shown to provide growth dividends. Examples of such initiatives include investment tax credits and education subsidies. However, these growth dividends seem undermined by the prevalence of software piracy. Yet, relatively large piracy rates do seem to have some positive growth dividends. Stronger property rights protection that checks software piracy would boost economic growth; however, the growth dividends are likely to be nonlinear. Policymakers should take account of these nonlinearities in designing effective piracy-control policies. The payoffs from piracy control efforts seem especially strong for developing nations. This line of inquiry may be fine tuned by including additional determinants of economic growth and examining their sensitivity to software piracy (see Levine & Renelt, 1992) and via the availability of data at a finer level of detail. Finally, it would be interesting to compare and contrast the growth effects of piracy and pirates (e.g., some nations might have many pirates but the magnitude of software piracy might be low and vice versa), if corresponding data were available.