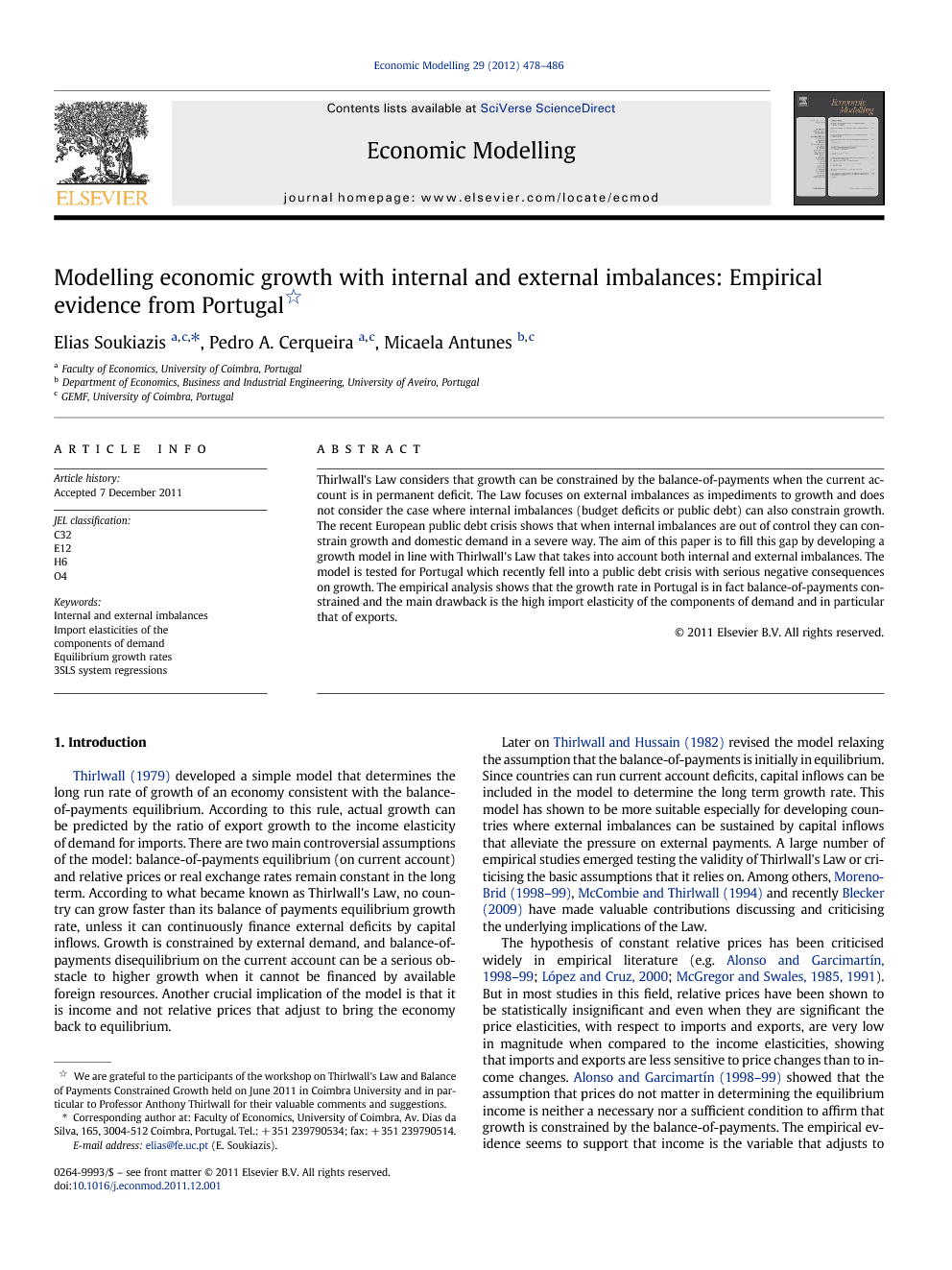 Thirlwall's Law considers that growth can be constrained by the balance-of-payments when the current account is in permanent deficit. The Law focuses on external imbalances as impediments to growth and does not consider the case where internal imbalances (budget deficits or public debt) can also constrain growth. The recent European public debt crisis shows that when internal imbalances are out of control they can constrain growth and domestic demand in a severe way. The aim of this paper is to fill this gap by developing a growth model in line with Thirlwall's Law that takes into account both internal and external imbalances. The model is tested for Portugal which recently fell into a public debt crisis with serious negative consequences on growth. The empirical analysis shows that the growth rate in Portugal is in fact balance-of-payments constrained and the main drawback is the high import elasticity of the components of demand and in particular that of exports.

The aim of this study was to develop an alternative growth model in line with Thirlwall's Law that takes into account both internal and external imbalances. The important contribution of the model is that it discriminates the import content of aggregate demand and introduces public deficit and debt measures as determinants of growth. The reduced form of the model shows that growth rates can be obtained in three alternative ways: assuming internal and external imbalances; assuming that public finances and current account external payments are balanced; and lastly the growth rate predicted by Thirlwall's Law. The growth model is tested for the Portuguese economy to check its accuracy. The equations constituting the model are estimated by 3SLS to control the endogeneity of variables and to obtain consistent estimates. The empirical analysis shows that growth rates obtained by Thirlwall's Law accurately predict the average growth rate of the Portuguese economy over the period 1985–2008 when the aggregate income elasticity of imports is used. When income elasticity of imports is decomposed into the main components of demand, the predicted growth rate is also close to the actual one. However, in these two cases external trade is balanced and public finances are at equilibrium. When trade and public imbalances are allowed the predicted growth rate is very different from the actual one and close to zero. The scenarios implemented to explain the low growth rate predicted by our model point to the fact that policies aiming to equilibrate external deficits or reducing the import sensitivity of exports are more effective for achieving higher growth in comparison to fiscal or monetary policies. In fact if the import elasticity of exports reduces from 0.56 to 0.30 (or 0.20) the predicted growth rate becomes closer to the actual average rate. Our study shows that the high import content of exports is the most important handicap to the Portuguese economy, confirming therefore that growth is balance-of-payments constrained, which is the essence of Thirlwall's Law.