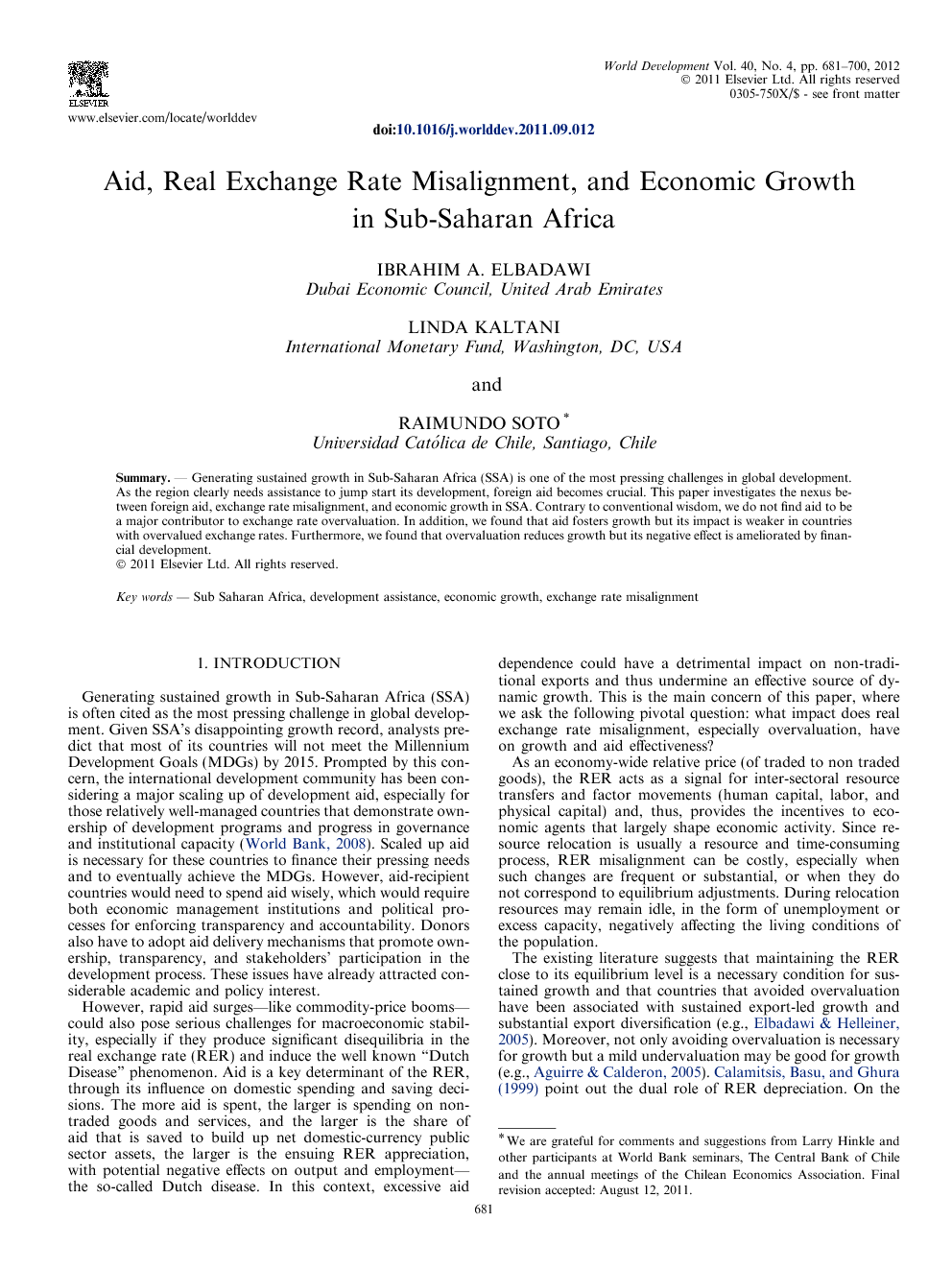 Generating sustained growth in Sub-Saharan Africa (SSA) is one of the most pressing challenges in global development. As the region clearly needs assistance to jump start its development, foreign aid becomes crucial. This paper investigates the nexus between foreign aid, exchange rate misalignment, and economic growth in SSA. Contrary to conventional wisdom, we do not find aid to be a major contributor to exchange rate overvaluation. In addition, we found that aid fosters growth but its impact is weaker in countries with overvalued exchange rates. Furthermore, we found that overvaluation reduces growth but its negative effect is ameliorated by financial development.

The real exchange rate has played a central role in the development strategy of most countries, in particular when their ability to foster rapid TFP-driven growth is limited. This paper develops RER misalignment series for a large panel of countries and studies the empirical link between RER misalignment and growth while also exploring possible interaction effects between RER misalignment with foreign aid and financial development. This paper makes a number of important contributions. At the technical level this paper develops an objective criterion for calibrating the estimated equilibrium RER so that it satisfies the condition that the RER must on average be in equilibrium in the long-run. At the empirical level, though the evidence produced has wider applicability, we emphasize the implications for Africa, given its diversity of exchange rate regimes and its high dependence on foreign aid as well as its relatively underdeveloped financial sector. This paper’s first contribution is to build model-consistent RER misalignment series for a large panel of countries. The RER misalignment series are generated from error-correction estimations for the equilibrium RER, based on structural determinants. The empirical results—based on a world sample of annual 1980–2004 data for 83 countries—show that the long-run coefficients of all structural variables and short-run coefficients of some structural variables are significant and display expected signs according to theory. Moreover, the main results remain intact when the model is estimated for a sub-sample of only SSA countries to check its robustness. Higher long-term foreign aid and terms of trade are shown to contribute significantly to long-term RER appreciation. However, short-term changes in aid do not have significant effects on short-run RER behavior. We used the long-run regression results to compute RER misalignment series for each country and to decompose RER misalignment according to the contribution of deviations of fundamentals from their long-term trends and of short-term dynamics. Not surprisingly, short-term shocks explain most of the RER deviations from equilibrium levels. Aid deviations from trend values contribute particularly little to misalignment. This evidence makes clear that the development impact of aid is not likely to be adversely affected by its potential influence on macroeconomic competitiveness. This finding, we would argue, is an important contribution to the debate on aid effectiveness. The evidence provided in this paper suggests that those countries that have experienced some growth spurts were also likely to have been able to avoid disequilibrium real exchange rate overvaluation. In fact the evidence suggests an even stronger implication regarding exchange rate policy in that, not only overvaluation is bad for growth, but that undervaluation is good for the latter. Therefore, the econometric results of this paper are also highly relevant to the current debate about the role of the real exchange rate as a growth fundamental. The additional empirical evidence that this paper offers is based on a growth equation that nests the above variables within a standard specification, controlling for growth fundamentals that are robustly identified in the empirical growth literature. Empirical estimations, based on the dynamic system GMM estimator, provide support for several channels of transmission from aid to growth. Moreover, the core predictions of the RER-oriented growth model were found to be robust to how RER misalignment is measured as well as to the major shift in the policy regime since the 1980s decade. The linear positive effect of aid on growth supports the notion that recipient countries having access to foreign resources are likely to use aid to finance investment, improve policies, and raise aggregate efficiency. However, the negative non-linear effect also shows that aid has decreasing growth benefits, reflecting growing misuse and/or weakening absorptive capabilities of larger aid inflows. The paper has provided evidence against an indirect negative effect of aid on growth, via RER misalignment, showing that very little RER appreciation can be traced to exceptionally large aid inflows. Hence recent aid surges were not found to be a major contributor to Dutch Disease-type RER misalignment and lower growth. The preceding results are complemented by important interaction effects, which show that the negative growth impact of RER misalignment is intensified by aid and weakened by financial development. Hence aid lowers growth in a macroeconomic environment that allows for RER overvaluation. Deeper financial markets provide better protection to (traded-goods) firms against periods of RER overvaluation, possibly by supplying more credit or offering hedging instruments against RER risk. Therefore, the empirical evidence on growth presented in this paper reveals important findings about the role of aid and other key growth determinants, both individually and through interactions. Our results on the existence and determinants of moderate RER overvaluation for many countries experiencing aid surges and its negative impact on growth lead to recommend strengthening international competitiveness through appropriate macroeconomic policies. Avoiding excessive government spending has the benefit of raising growth, both directly and indirectly by reducing RER overvaluation. In the realm of structural policies, our results suggest that financial development and deepening—including banking and capital-market development—have a direct positive effect on long-term growth and an additional growth bonus by reducing the adverse growth impact of RER overvaluation. Hence financial development should be a high priority for these countries. This could include strengthening domestic banking, supporting development of domestic capital markets, and promoting development of financial instruments to protect against exchange-rate risk.