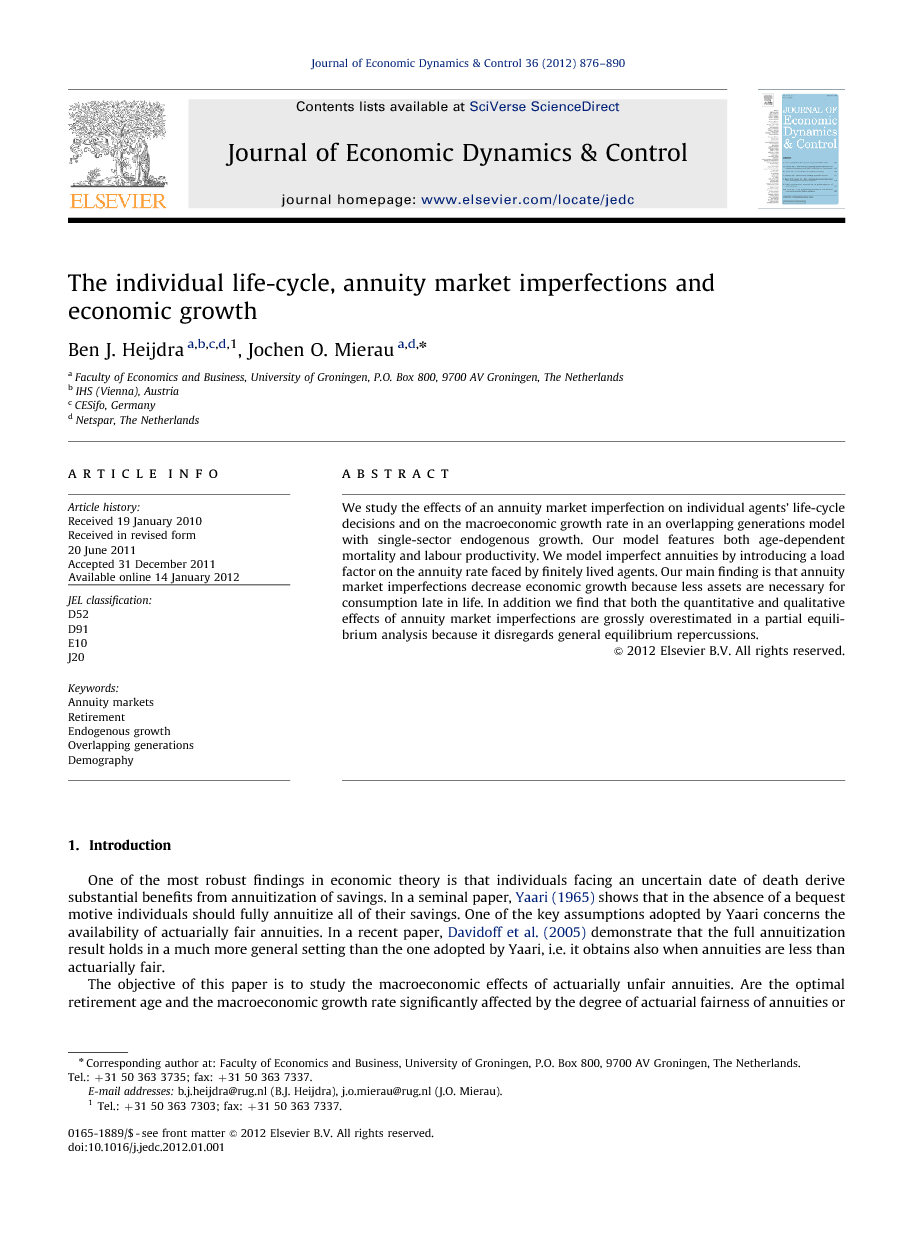 We study the effects of an annuity market imperfection on individual agents' life-cycle decisions and on the macroeconomic growth rate in an overlapping generations model with single-sector endogenous growth. Our model features both age-dependent mortality and labour productivity. We model imperfect annuities by introducing a load factor on the annuity rate faced by finitely lived agents. Our main finding is that annuity market imperfections decrease economic growth because less assets are necessary for consumption late in life. In addition we find that both the quantitative and qualitative effects of annuity market imperfections are grossly overestimated in a partial equilibrium analysis because it disregards general equilibrium repercussions.

One of the most robust findings in economic theory is that individuals facing an uncertain date of death derive substantial benefits from annuitization of savings. In a seminal paper, Yaari (1965) shows that in the absence of a bequest motive individuals should fully annuitize all of their savings. One of the key assumptions adopted by Yaari concerns the availability of actuarially fair annuities. In a recent paper, Davidoff et al. (2005) demonstrate that the full annuitization result holds in a much more general setting than the one adopted by Yaari, i.e. it obtains also when annuities are less than actuarially fair. The objective of this paper is to study the macroeconomic effects of actuarially unfair annuities. Are the optimal retirement age and the macroeconomic growth rate significantly affected by the degree of actuarial fairness of annuities or is this imperfection quantitatively unimportant? To answer this question we construct a stylized overlapping generations model of a closed economy featuring endogenous growth due to an inter-firm investment externality of the “AK” -type. Our starting point is the celebrated Blanchard (1985) model. We extend this model in five directions. First, we endogenize the individual agent's life-cycle labour supply decision. Second, we introduce an annuity imperfection parameter which allows us to study the cases of actuarially fair and unfair annuities in a single framework. In the latter case annuity firms make profits which are taxed away by the government and transferred to households. Third, we introduce an asset constraint that disallows agents from holding negative asset balances. Fourth, we introduce age-dependent labour efficiency. Finally, we incorporate the insights of Heijdra and Romp (2008) and postulate an age-dependent mortality process. Our main findings are as follows. First, the imperfection on the annuity market leads individuals to discount future consumption by a term including their mortality rate as well as their pure rate of time preference. Due to the age-dependent mortality rate this leads to a hump-shaped consumption profile. This in turn reduces capital accumulation as less assets are required to finance consumption late in life. The reduction in asset accumulation by the individual agents leads to lower economic growth on the aggregate level because capital accumulation is the driving force behind economic development in our model. Second, in terms of labour supply we find that individuals supply less labour during their working life but retire slightly later if annuities are less than fair. On the whole this leads to a decrease in aggregate labour supply. Third, we show that the way in which annuity firms' profits are redistributed plays an important role in the analysis. In the baseline analysis we assume that these profits are transferred equally across all agents. If, however, the profits are redistributed with a skew towards the young, then growth is slightly higher because young agents are savers. On the other hand, if profits are distributed towards the elderly growth is slightly lower because the elderly are dissavers. Finally, if these profits are drained from the economy via wasteful government consumption, growth deteriorates dramatically and the retirement age is reduced substantially. Fourth, our analysis emphasizes the importance of general equilibrium effects. In a pure partial equilibrium analysis, the impact of imperfect annuities is grossly overestimated because such an analysis ignores both the redistribution of profits and the response in the economic growth rate. This finding shows that, as much as macroeconomics should be microfounded, microeconomics should be macrofounded. The two papers most closely associated with ours are Bütler (2001) and Hansen and İmrohorogˇlu (2008). Both study the role of annuities for individual consumption decisions over the life-cycle. In addition, Bütler studies endogenous labour supply decisions, though not in relation to the imperfect annuities market. Hansen and İmrohoroğlu embed their model in a general equilibrium context but disregard the labour supply decisions made by the individual agents. In addition they only study the polar cases of perfect and no-annuities in the general equilibrium model. We extend the insights of Bütler to the general equilibrium case and explicitly take into account the impact of imperfect annuities on labour supply and retirement decisions (as opposed to Hansen and İmrohoroğlu). Furthermore, we also study imperfect annuities in general equilibrium, not only at the individual level (as in Bütler) or in the absence of annuities (as in Hansen and İmrohoroğlu). In addition to the papers of Bütler and Hansen and İmrohoroğlu, there is a substantial literature studying the partial equilibrium implications of annuity market imperfections. It is beyond the scope of this paper to give a full review of this literature but is good to alert the interested reader to Chai et al. (2011). They study a very detailed partial equilibrium stochastic life-cycle model in which agents feature an endogenous labour supply decision and can choose between a variety of assets to invest in. Their findings regarding the retirement decision fit well with our analysis in the sense that they find that introducing annuities leads to earlier retirement. However, as we show in this paper, the partial equilibrium literature might be strongly misleading due its neglect of general equilibrium repercussions. The remainder of the paper is structured as follows. Section 2 sets out the model, whilst Section 3 discusses how empirical observations are fed into the model. Section 4 studies the relationship between the annuity market imperfection, the individual life-cycle, and the macroeconomic growth rate and contains some sensitivity analysis. Section 5 concludes.

We study the impact of imperfect annuity markets on the individual life-cycle and macroeconomic outcomes. On the individual level we find that imperfect annuities lead to a hump-shaped consumption profile which brings the predictions of the model closer to the empirically observed consumption profiles (Alessie and de Ree, 2009, Gourinchas and Parker, 2002 and Fernandez-Villaverde and Krueger, 2007). Regarding labour supply we find that agents retire slightly later but supply less hours over their active career. The hump-shaped consumption profile reduces the need for retirement savings and, thereby, decreases capital accumulation. From an aggregate perspective the decrease in capital accumulation leads to a reduction in economic growth. In addition, we find that the mode of redistributing the profits has important implications at both the individual and the aggregate level. Finally, in terms of both sign and magnitude, we find that a partial equilibrium analysis grossly overestimates the impact of annuity market imperfections. The focus of the current paper has been on the development of a model that allows us to study the implications of annuity market imperfections on both the individual life-cycle and the macroeconomic environment. The model is, however, much more versatile than the current paper would lead one to conclude. Indeed, in Heijdra and Mierau, 2010 and Heijdra and Mierau, 2011 we have used alternative versions of this model to study important public finance issues such as the different impact of consumption and labour taxes and the moderating effect of a public pension system in the wake of a mortality shock. In future work we will introduce an active human–capital accumulation phase into the model and study the transitional dynamics of various policy measures.