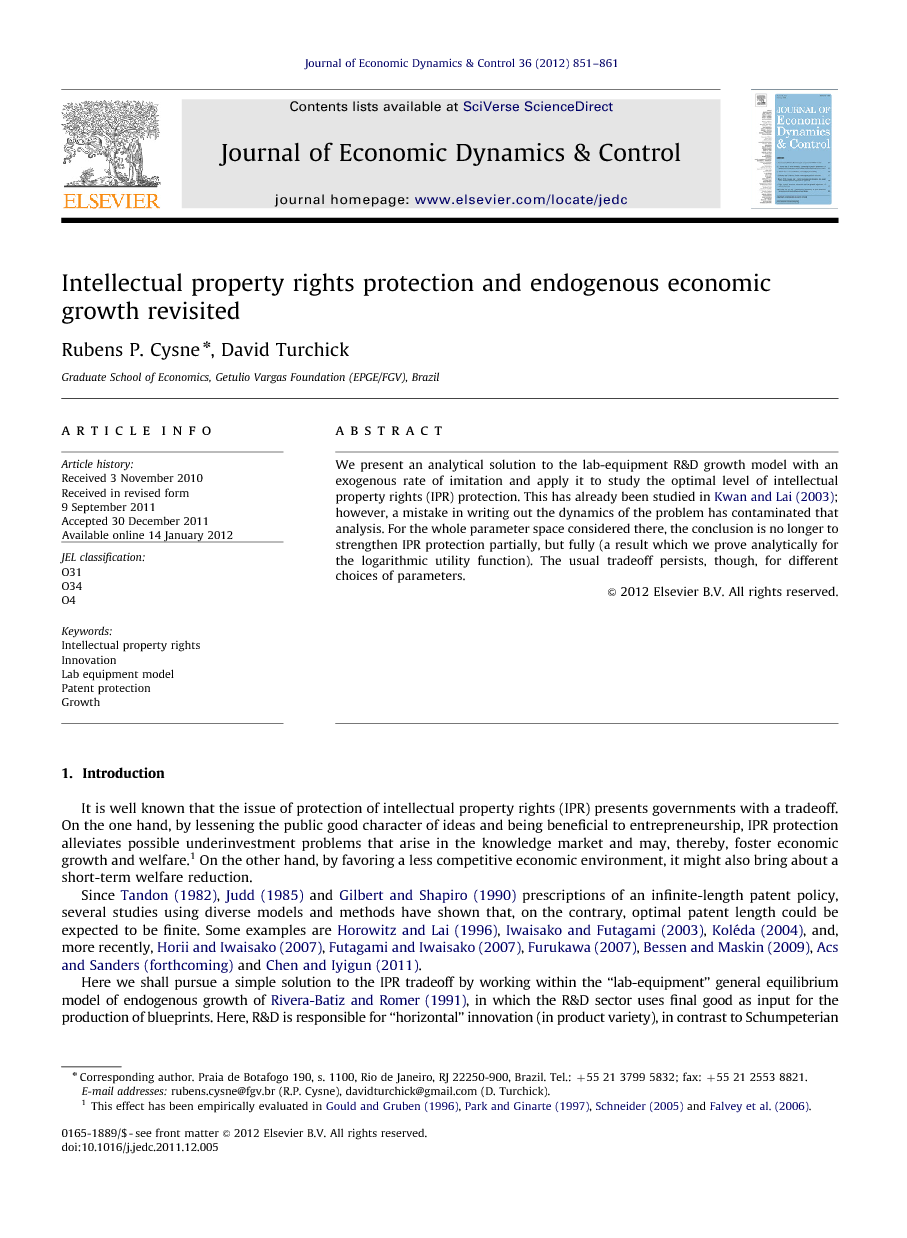 We present an analytical solution to the lab-equipment R&D growth model with an exogenous rate of imitation and apply it to study the optimal level of intellectual property rights (IPR) protection. This has already been studied in Kwan and Lai (2003); however, a mistake in writing out the dynamics of the problem has contaminated that analysis. For the whole parameter space considered there, the conclusion is no longer to strengthen IPR protection partially, but fully (a result which we prove analytically for the logarithmic utility function). The usual tradeoff persists, though, for different choices of parameters.

It is well known that the issue of protection of intellectual property rights (IPR) presents governments with a tradeoff. On the one hand, by lessening the public good character of ideas and being beneficial to entrepreneurship, IPR protection alleviates possible underinvestment problems that arise in the knowledge market and may, thereby, foster economic growth and welfare.1 On the other hand, by favoring a less competitive economic environment, it might also bring about a short-term welfare reduction. Since Tandon (1982), Judd (1985) and Gilbert and Shapiro (1990) prescriptions of an infinite-length patent policy, several studies using diverse models and methods have shown that, on the contrary, optimal patent length could be expected to be finite. Some examples are Horowitz and Lai (1996), Iwaisako and Futagami (2003), Koléda (2004), and, more recently, Horii and Iwaisako (2007), Futagami and Iwaisako (2007), Furukawa (2007), Bessen and Maskin (2009), Acs and Sanders (forthcoming) and Chen and Iyigun (2011). Here we shall pursue a simple solution to the IPR tradeoff by working within the “lab-equipment” general equilibrium model of endogenous growth of Rivera-Batiz and Romer (1991), in which the R&D sector uses final good as input for the production of blueprints. Here, R&D is responsible for “horizontal” innovation (in product variety), in contrast to Schumpeterian “vertical” innovation (in product quality). Added to the model is an exogenous imitation rate a la Krugman (1979) (also used by Barro and Sala-i-Martin, 2004, Chapter 6.2; and by Gancia and Zilibotti, 2005, Section 2.3), associated with the prevailing level of IPR protection. The first effect of the tradeoff above, related to long-term growth, will derive essentially from the usual Euler equation. By giving the model a global analytical solution (unlike any other analyses of this model of which we are aware in the literature), it becomes possible to precisely gauge the second effect, the one which emerges from the instantaneous change in the consumption level. In this way all the dynamic welfare gains/losses related to a change in IPR protection policy can be taken into account. Kwan and Lai (2003) uses this same model in order to analyze optimal patent protection. However, that analysis contains a mistake in the writing out of the dynamics of the problem which ends up contaminating the results.2Iwaisako and Futagami (2003) also addresses this issue in a model equivalent to the one presented here, although using a fixed-length patent system, rather than an imitation rate of invented varieties. However, they limit their welfare analysis to steady states. The present paper considers the whole dynamic path. This paper shows, in contrast with Kwan and Lai (2003), that for the whole set of parameter vectors considered there, the optimal policy is always that of providing full (infinite-length) protection of IPR—and not an incomplete one. This is to say that, when restricted to the parameter values used by Kwan and Lai, the IPR protection tradeoff has in fact a corner solution, and the model's policy implication is that governments should pursue an infinite-length patent policy. In particular, if utility is logarithmic, we prove that this conclusion is valid irrespective of any other parameter values. We also provide examples based on a parameter set other than the one worked out by Kwan and Lai (2003). In such cases, their insight that the present model is able to generate incomplete optimal patent protection happens to be correct. The IPR protection tradeoff may then have an interior solution, meaning that the optimal policy may be that of inaction (in very specific situations), loosening, or partial tightening of patent protection. The structure of the paper is as follows. Section 2 presents the model and covers the growth effect of the IPR protection tradeoff. Section 3 gives the closed-form solution for its dynamic path and evaluates the current-consumption effect. Section 4 builds on the foundations established in the two previous sections to consider the optimal IPR protection problem, first analytically (through Proposition 3) and then numerically. Section 5 concludes.

The lab-equipment R&D model of endogenous growth of Rivera-Batiz and Romer (1991), when coupled with an exogenous rate of imitation a la Krugman (1979), generates an IPR protection tradeoff between long-run growth and short-run consumption. We use Propositions 1 and 2 to show this fact. Furthermore, the model leads to a dynamical system which we show to be of the Riccati type. We provide a global analytical solution to this system and use it to study the optimal level of IPR protection. We prove analytically that, when utility is logarithmic, the optimal patent length is always infinite (Proposition 3). The same result emerges, following our numerical analysis, for the whole set of parameter values used in Kwan and Lai (2003). This fact establishes a clear contrast between our results and theirs. Indeed, in all such cases, the tradeoff just mentioned has a corner solution, making the model's governmental-policy implication one of seeking full IPR protection. For other parameter values, as we show, the tradeoff persists, so that the optimal policy may be one of protecting patents more (but in an incomplete fashion), less, or just leaving things as they currently are. Finally, a series of 12 graphs allows the reader to visualize many different regions in which protection should be strengthened, as well as weakened. The reader should be cautioned to the fact that all calculations developed here are based on an ad hoc assumption about how imitation develops over time (Eq. (4)). One possible extension of this work would be trying to figure out how robust the results are to changes in this specification (for instance, as suggested in Helpman, 1993, ft. 5).