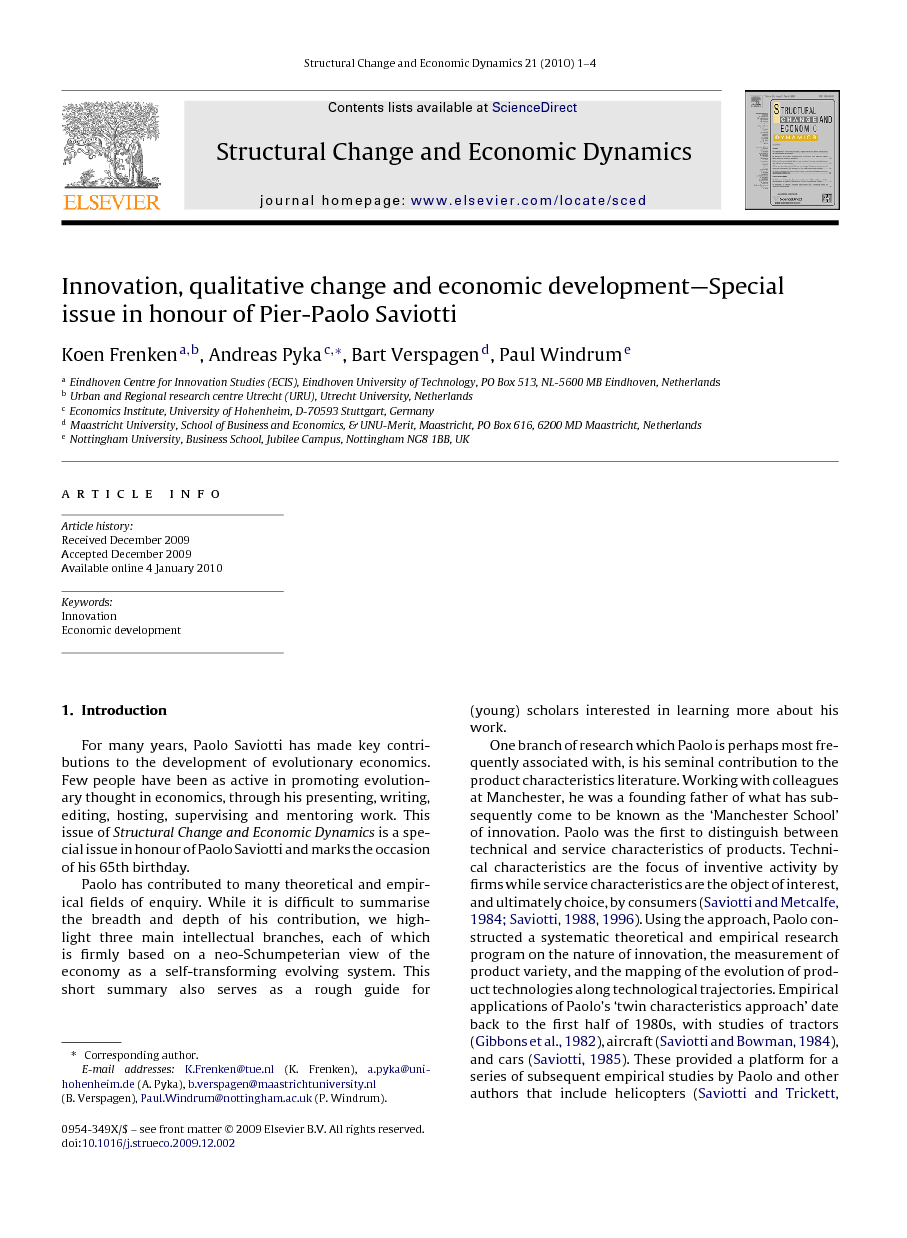 For many years, Paolo Saviotti has made key contributions to the development of evolutionary economics. Few people have been as active in promoting evolutionary thought in economics, through his presenting, writing, editing, hosting, supervising and mentoring work. This issue of Structural Change and Economic Dynamics is a special issue in honour of Paolo Saviotti and marks the occasion of his 65th birthday. Paolo has contributed to many theoretical and empirical fields of enquiry. While it is difficult to summarise the breadth and depth of his contribution, we highlight three main intellectual branches, each of which is firmly based on a neo-Schumpeterian view of the economy as a self-transforming evolving system. This short summary also serves as a rough guide for (young) scholars interested in learning more about his work. One branch of research which Paolo is perhaps most frequently associated with, is his seminal contribution to the product characteristics literature. Working with colleagues at Manchester, he was a founding father of what has subsequently come to be known as the ‘Manchester School’ of innovation. Paolo was the first to distinguish between technical and service characteristics of products. Technical characteristics are the focus of inventive activity by firms while service characteristics are the object of interest, and ultimately choice, by consumers (Saviotti and Metcalfe, 1984, Saviotti, 1988 and Saviotti, 1996). Using the approach, Paolo constructed a systematic theoretical and empirical research program on the nature of innovation, the measurement of product variety, and the mapping of the evolution of product technologies along technological trajectories. Empirical applications of Paolo's ‘twin characteristics approach’ date back to the first half of 1980s, with studies of tractors (Gibbons et al., 1982), aircraft (Saviotti and Bowman, 1984), and cars (Saviotti, 1985). These provided a platform for a series of subsequent empirical studies by Paolo and other authors that include helicopters (Saviotti and Trickett, 1992), aircraft, helicopters, motorcycles and microcomputers (Frenken et al., 1999), steam engines (Frenken and Nuvolari, 2004), refinery processing (Nguyen et al., 2005), the camera industry (Windrum, 2005) and a recent special issue of the Journal of Evolutionary Economics (2009) that was co-edited by Paolo (Fontana et al., 2009), and includes studies of skis (Corrocher and Guerzoni, 2009), solar cells (Haller and Grupp, 2009), cars (Los and Verspagen, 2009 and Alkemade et al., 2009), tanks (Castaldi et al., 2009) and mobile phones (Windrum et al., 2009).

To detect the dynamics of knowledge production, knowledge can be analyzed as a co-relational network structure where proximity and distance effects affect cross-fertilization of different areas of knowledge (Saviotti, 2009). Antonelli, Krafft and Quatraro in their contribution to this Festschrift elaborate the knowledge network in information and communication technologies by focussing on the international patent classification. The authors show that the recombination of knowledge depends on coherence and specialization. Those countries where ICT industries are better in recombinant learning are characterized by higher rates national multifactor productivity growth. Finally, the paper by Hartmann, Pyka and Hanusch applies ‘Comprehensive Neo-Schumpeterian’ reasoning to the catching up processes of Latin American economies. Applying innovation theory to economic development in the Southern hemisphere is a topic which Paolo Saviotti has worked on for many years (e.g. Saviotti, 2003, Saviotti et al., 2008 and Saviotti and Nesta, 2009). In the theoretical part of their paper, Hartmann, Pyka and Hanusch take the Neo-Schumpeterian approach, which has largely been developed with Western economies in mind, and integrate it with Amartya Sen's capability approach. The authors proceed to highlight co-evolutionary relationships between institutional, socio-economic and technological development. The empirical analysis indicates that varieties of future-orientation that can be found in Latin America. The results of their cluster analysis support the development and application of different policy strategies, which may support and trigger development processes in various Latin countries with similar structures.