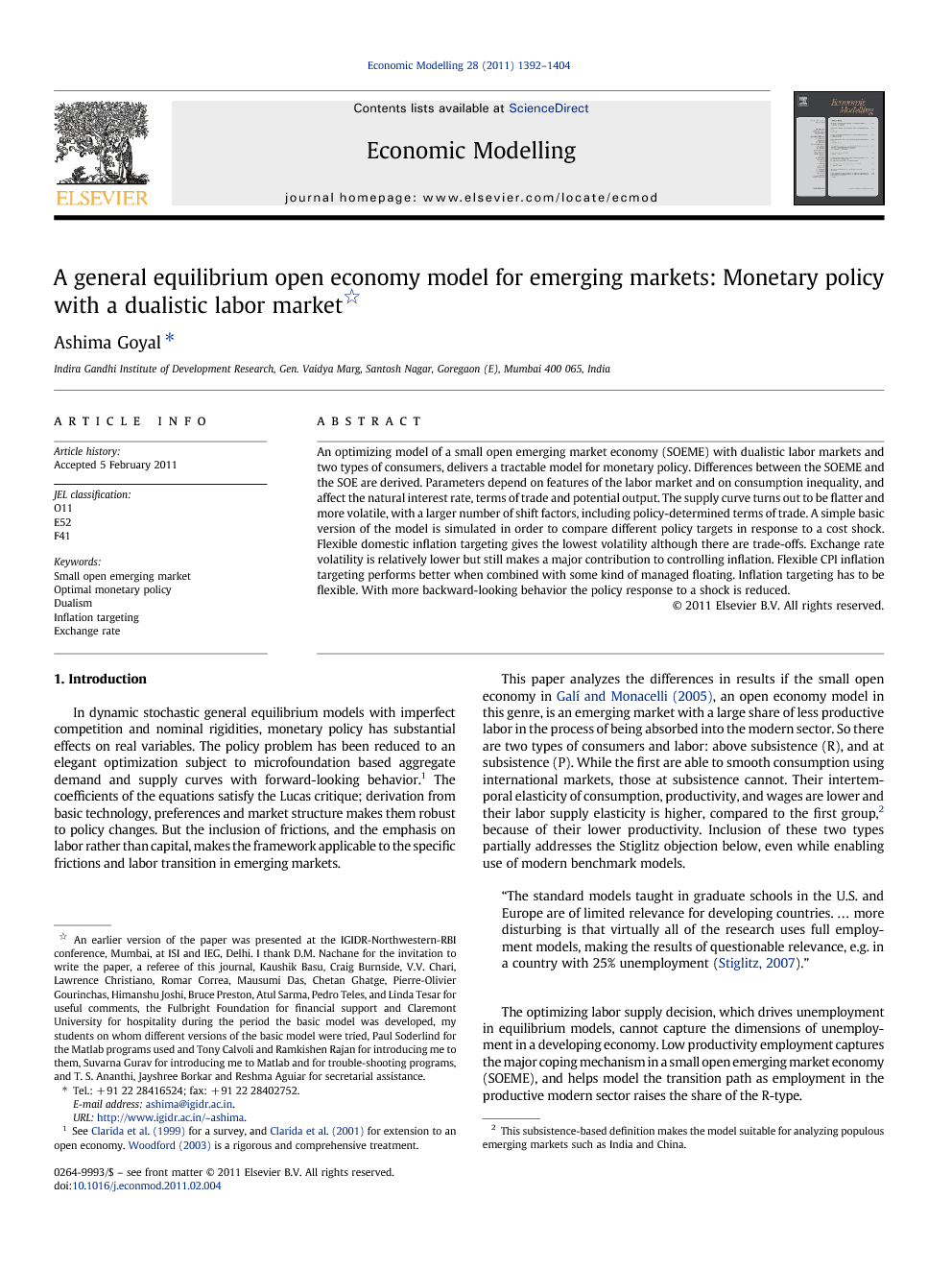 An optimizing model of a small open emerging market economy (SOEME) with dualistic labor markets and two types of consumers, delivers a tractable model for monetary policy. Differences between the SOEME and the SOE are derived. Parameters depend on features of the labor market and on consumption inequality, and affect the natural interest rate, terms of trade and potential output. The supply curve turns out to be flatter and more volatile, with a larger number of shift factors, including policy-determined terms of trade. A simple basic version of the model is simulated in order to compare different policy targets in response to a cost shock. Flexible domestic inflation targeting gives the lowest volatility although there are trade-offs. Exchange rate volatility is relatively lower but still makes a major contribution to controlling inflation. Flexible CPI inflation targeting performs better when combined with some kind of managed floating. Inflation targeting has to be flexible. With more backward-looking behavior the policy response to a shock is reduced.

In dynamic stochastic general equilibrium models with imperfect competition and nominal rigidities, monetary policy has substantial effects on real variables. The policy problem has been reduced to an elegant optimization subject to microfoundation based aggregate demand and supply curves with forward-looking behavior.1 The coefficients of the equations satisfy the Lucas critique; derivation from basic technology, preferences and market structure makes them robust to policy changes. But the inclusion of frictions, and the emphasis on labor rather than capital, makes the framework applicable to the specific frictions and labor transition in emerging markets. This paper analyzes the differences in results if the small open economy in Galí and Monacelli (2005), an open economy model in this genre, is an emerging market with a large share of less productive labor in the process of being absorbed into the modern sector. So there are two types of consumers and labor: above subsistence (R), and at subsistence (P). While the first are able to smooth consumption using international markets, those at subsistence cannot. Their intertemporal elasticity of consumption, productivity, and wages are lower and their labor supply elasticity is higher, compared to the first group,2 because of their lower productivity. Inclusion of these two types partially addresses the Stiglitz objection below, even while enabling use of modern benchmark models. “The standard models taught in graduate schools in the U.S. and Europe are of limited relevance for developing countries. … more disturbing is that virtually all of the research uses full employment models, making the results of questionable relevance, e.g. in a country with 25% unemployment (Stiglitz, 2007).” The optimizing labor supply decision, which drives unemployment in equilibrium models, cannot capture the dimensions of unemployment in a developing economy. Low productivity employment captures the major coping mechanism in a small open emerging market economy (SOEME), and helps model the transition path as employment in the productive modern sector raises the share of the R-type. A simple version of the model is calibrated and simulated for a typical small open emerging market economy (SOEME). Optimal monetary policy responses to a cost shock are derived under different types of targeting. In order to focus on the labor market, simplifying assumptions of complete financial markets and perfect capital mobility are maintained. Capital account liberalization is making international risk sharing, which is an important element of the model, feasible for the better off in emerging markets. CES aggregation allows the micro diversity to be collapsed to macro aggregates, as is common in the literature. The major theoretical results are: the aggregate supply curve derived for a SOEME is flatter compared to that of a mature small open economy (SOE), because of higher labor supply elasticity but is less stable, with more factors tending to shift it. The slope reduces as the economy becomes more open, but the reduction is relatively more for a SOE. In the SOEME, the real exchange rate is depreciated, and tends to appreciate as development brings it closer to purchasing power parity (PPP). But there are fluctuations on the way. Since income changes that affect the terms of trade are concentrated among the R-types, the terms of trade are more volatile. Therefore endogenous terms of trade make aggregate supply less elastic, especially for an almost closed economy with a large percentage of P-types. Hence there is a case for managed floating. Changing the exchange rate can counter some of the shifts in aggregate supply. This is demonstrated in a second derivation of aggregate demand and supply with policy-determined terms of trade. Subsistence labor implies the average world income exceeds the SOEME per capita income. This defines a gap variable, which implies a trade surplus, partially explaining trade surpluses in many rapidly growing Asian SOEMEs. The dualistic structure adds consumption of the subsistence group, and the gap variable, as exogenous variables in addition to those in the SOE. They affect the natural rate of interest, potential output, and the equilibrium terms of trade, in general reducing the effect of the original exogenous variables, world output and technology, compared to the SOE. The interest elasticity of aggregate demand is lower but there are more factors tending to decrease the natural rate of interest, including expected appreciation of the terms of trade. The size of shocks to the natural interest rate also rises in a SOEME. Dynamic simulations validate the model and the theoretical results. They show that flexible targeting of domestic inflation delivers the lowest volatility, with the least monetary contraction. There is an active use of exchange rate policy to lower the price impact of a cost shock, but fluctuations in the exchange rate are lower than under CPI and strict direct inflation targeting (DIT). CPI inflation targeting does almost as well as DIT when combined with some kind of managed floating. Pure inflation targeting is not optimal; a weight on output and on interest rate smoothing delivers better results. The exchange rate is not a separate target variable, but is one of the variables affecting inflation. Its effect on aggregate supply makes it a useful counter to a supply shock. The structure of the paper is as follows. The model is developed in Section 2. Household optimization is in Section 2.1 and the firm in Section 2.2. Natural rates are derived in Section 3. The model is tested and optimal policy response to a cost shock simulated in Section 4, before Section 5 concludes. Derivations and proofs are in the appendices.

The SOEME optimizing model, with dualistic labor markets and two types of consumers, delivers a tractable model for monetary policy. The basic structure of the forward-looking aggregate demand and supply equations is the same as for the SOE and the closed economy, but the parameters depend on features of the labor market and on consumption inequality. These parameters also affect the natural rates. The SOEME collapses to the SOE model as inequality disappears. Differences between the two are systematically derived in the paper. The interest elasticity of aggregate demand is lower and the supply curve turns out to be flatter and more volatile in the SOEME, especially due to shocks to the terms of trade. If the terms of trade are endogenous the supply curve becomes relatively steeper, so managing exchange rates can improve the supply response. A simple version of the model simulated, supports the theoretical results on differences between the SOEME and the SOE. It compares outcomes after monetary policy optimization, in response to a cost shock, with varying weights in its objective function. Policy does best by flexible targeting of domestic inflation, giving some weight to the output gap and interest rate smoothing. This lowers monetary tightening, exchange rate appreciation and volatility in response to a cost shock. Exchange rate flexibility reduces inflation, but aggressively using the direct exchange channel at short-horizons to reduce inflation, is not optimal. Targeting CPI inflation does almost as well as DIT with some kind of credible exchange rate intervention. Therefore pure inflation targeting is not optimal. With more backward-looking behavior, the policy response to a shock is muted. Simulations provide evidence of a flatter supply curve, with least welfare losses, when terms of trade are fixed. Extensions to other shocks such as the natural rates, demand, technology, changes in the consumption of P; to different lag structures; the effect of changing natural rates in the catch-up process; the evolution of the fiscal balance; the effect of backward-looking domestic inflation, but CPI inflation becoming more forward-looking due to the increasing impact of exchange rates as the economy opens out more, are attempted in Goyal, 2009, Goyal, 2010 and Goyal, 2011. Even so much additional work remains to be done. First, the implications of pricing to market or in importer's currency can also be explored although this may not be so relevant for commodity imports. Capital markets can be explicitly modeled. Second, SOEMEs have different kinds of nominal and real wage rigidities. It would be particularly useful to model the consequences of real wages rigid in terms of food prices (Goyal, 2008), and of forward-looking wage setting. The former is a feature of populous low-per capita income SOEMEs, and the latter of CB credibility. Third is to explore the consequences of relaxing simplifying assumptions, including on elasticities, on loss function weights, on uncorrected steady-state distortions, such as deviations from PPP and asset accumulation through the current account. A non-zero current account, together with changes in natural rates with development, implies that multiple steady states can exist.