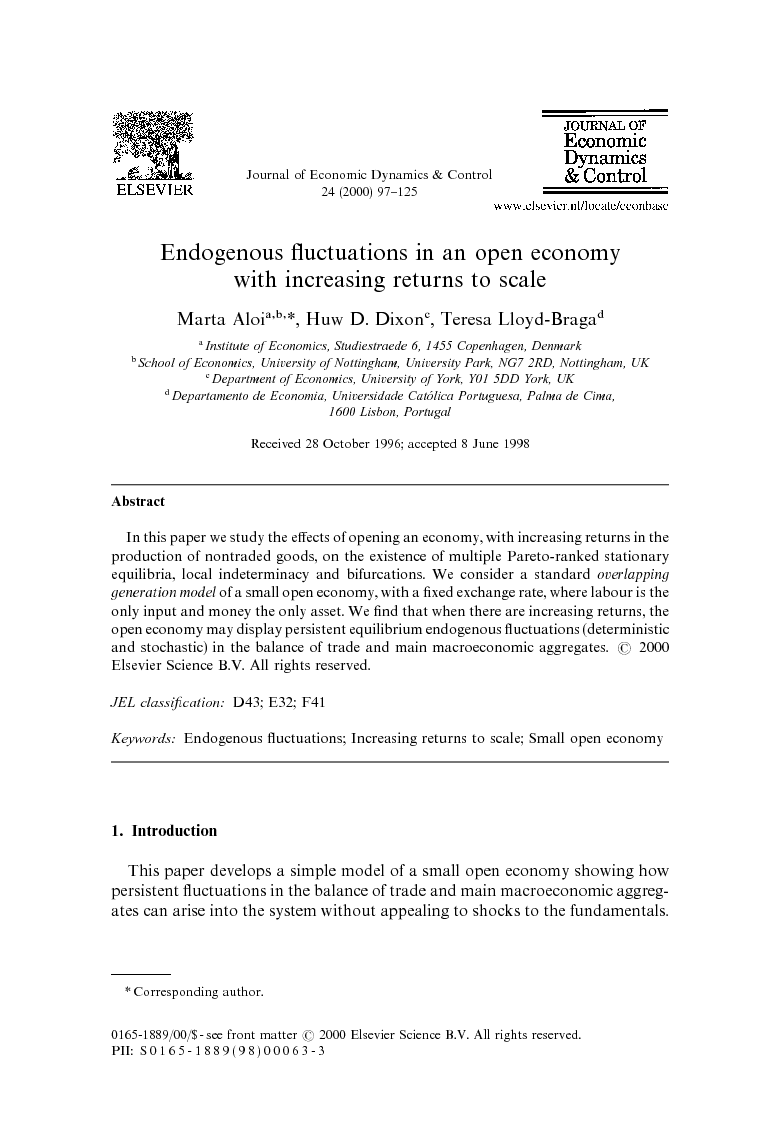 In this paper we study the effects of opening an economy, with increasing returns in the production of nontraded goods, on the existence of multiple Pareto-ranked stationary equilibria, local indeterminacy and bifurcations. We consider a standard overlapping generation model of a small open economy, with a fixed exchange rate, where labour is the only input and money the only asset. We find that when there are increasing returns, the open economy may display persistent equilibrium endogenous fluctuations (deterministic and stochastic) in the balance of trade and main macroeconomic aggregates.

This paper develops a simple model of a small open economy showing how persistent fluctuations in the balance of trade and main macroeconomic aggregates can arise into the system without appealing to shocks to the fundamentals. In particular, we study the impact of openness on the uniqueness/multiplicity of steady states, local indeterminacy, deterministic and stochastic endogenous fluctuations in an economy with increasing returns to scale and imperfect competition. We consider a simple OG open economy model, with money, in which there is a traded and a nontraded sector. The exchange rate is assumed fixed, the price of traded goods being determined by the world market. For simplicity, we assume that the traded good is an endowment which is constant over time. The technology for producing the nontraded good with labour exhibits increasing returns to scale. There is imperfect (Cournotian-monopolistic) competition in the nontraded sector output markets with free entry. In our set up the (endogenous) equilibrium number of firms is constant and so is the mark up. The model is designed to be as simple as possible, and we abstract away from capital accumulation. In this economy, money is the only asset and is predetermined (its value at time t is determined by the state of the economy in the previous period, i.e. by the balance of trade). Technology and preferences are time invariant, as is the price of traded goods (exogenously fixed, due to the small country and fixed exchange rate assumptions).We disregard exogenous shocks in order to focus on the role played by underlying preference and technology parameters in generating endogenous fluctuations. The present paper develops the existing studies of endogenous fluctuations in the macroeconomic context to the case of an open economy. The earliest studies followed Grandmont (1985) in focussing on the closed economy case. We follow his approach by assuming that there is no capital: however, we differ from him in assuming that there are increasing returns in production, and also that there are two sectors (traded and nontraded) so that the dynamic system is two dimensional. This complements the closed economy models with capital, in which endogenous fluctuations are possible with positive labour supply elasticities (for the case of constant returns, see Reichlin, 1986 and Reichlin, 1992, Woodford (1986) and Grandmont et al. (1998)) or, for the case of increasing returns, recent works by Lloyd-Braga, 1995a and Lloyd-Braga, 1995b and Cazzavillan et al. (1998). In our study we explore the conditions under which local deterministic and stochastic endogenous fluctuations may emerge into the system by using the methodology of Grandmont et al. (1998). The advantage of this method is that it provides a simple and comprehensive geometrical way to analyse the behaviour of equilibrium trajectories nearby a steady state, without appealing to particular specifications of preferences or technology. We find that there are four fundamental parameters determining the local dynamic properties of the model: the extent of returns to scale; the degree of substitutability between traded and nontraded goods; the propensity to consume nontraded goods; the elasticity of labour supply. Our main results are the following. First, we characterise sufficient conditions for the existence of a steady-state solution (Proposition 1) and the existence of more than one steady state (Propositions 2 and 3). We find that the equilibria are Pareto ranked (Proposition 4): steady states with higher levels of nontraded consumption Pareto dominate those with lower levels. A constant elasticity formulation of preferences and technology illustrates Propositions 1–4. Second, we analyse the local dynamics of the system and consider local stability and the emergence of local bifurcations. We find that (Proposition 5), whilst for some parameter values the economy is saddle point stable, for other parameter values local bifurcations (transcritical or flip) can occur and local (deterministic and stochastic) endogenous fluctuations emerge. In addition, stochastic endogenous fluctuations can also occur when the nearby steady state is a sink (i.e. locally indeterminate) or close to a stable periodic cycle (i.e. supercritical flip bifurcation). In general, endogenous fluctuations are more likely if returns to scale are larger and the economy is more open. Imperfect competition is important but not crucial in our model: (internal) increasing returns to scale in production are only possible if there is imperfect competition. However, if increasing returns are external, then much the same results would hold under perfect competition. Thus it is the degree of increasing returns (internal or external) that is the most fundamental requirement: if there are constant or decreasing returns to scale, then endogenous fluctuations are not possible.1 Openness is crucial for the emergence of deterministic cycles. In the closed economy version of our simple model (see Lloyd-Braga, 1995a), flip bifurcations cannot occur with a positively sloped labour supply even with increasing returns to scale. Our paper departs from the existing intertemporal open macroeconomic literature. One of the major puzzles in the intertemporal approach to the current account has been its excess volatility (Baxter, 1995). In particular, if one views supply shocks as being the driving force behind macroeconomic fluctuations, these need to be persistent shocks if they are to explain output and employment. Persistent supply shocks should lead to persistent fluctuations on the current account (see Obstfeld and Rogoff (1996) for a survey), but trade and current accounts appear to be more volatile than predicted by this approach. Our approach, in contrast, explains the possibility that the volatility of the current account and related macro aggregates is not the result of exogenous shocks, but rather the result of endogenous fluctuations.2 The plan of the paper is as follows. In Section 2we present the basic macroeconomic model. In Section 3we consider the equilibrium dynamic system and explore its steady-state properties. In Section 4we undertake the technical analysis of local dynamics and bifurcations around a steady state, seeing the relationship between the underlying parameters and the type of endogenous fluctuations that can emerge. In Section 5we discuss the economic intuition of the results of Section 4. In Section 6we conclude.

In this paper we develop a standard overlapping generation model of a small open economy with a traded and a nontraded good, where labour is the only factor of production and money the only asset. The nontraded good sector is characterised by Cournotian-monopolistic competition with free entry and increasing returns to scale at the firm level, whereas output in the traded good sector is exogenous. In this setting the dynamic equilibrium is described by a two-dimensional system with one predetermined variable (money), which we analyse for the emergence of local deterministic and stochastic endogenous fluctuations. The paper demonstrates the possibility of deterministic (and stochastic) endogenous fluctuations in an open economy with increasing returns to scale. Under constant returns and positive labour supply elasticity, the system is always at a saddle point stable equilibrium. Hence, as in closed economies (see e.g. Lloyd-Braga (1995a), Cazzavillan et al. (1998)), increasing returns (either internal or external) is one crucial element leading to the emergence of endogenous fluctuations.32 The new feature of the paper has been to introduce openness into the economy: contrary to the equivalent closed economy set up, households can substitute consumption between traded and nontraded goods, and deterministic cycles can emerge. Clearly, the simplicity of the underlying economic model used does not permit us to make any specific observations about the functioning of real economies. However, we have demonstrated that there is a potential solution to the problem of the excess variability in the current account to which other approaches have given rise. An economy in which all of the fundamentals are unchanged can still exhibit persistent volatility in its current account. This is perhaps the clearest conclusion to be drawn from our paper.