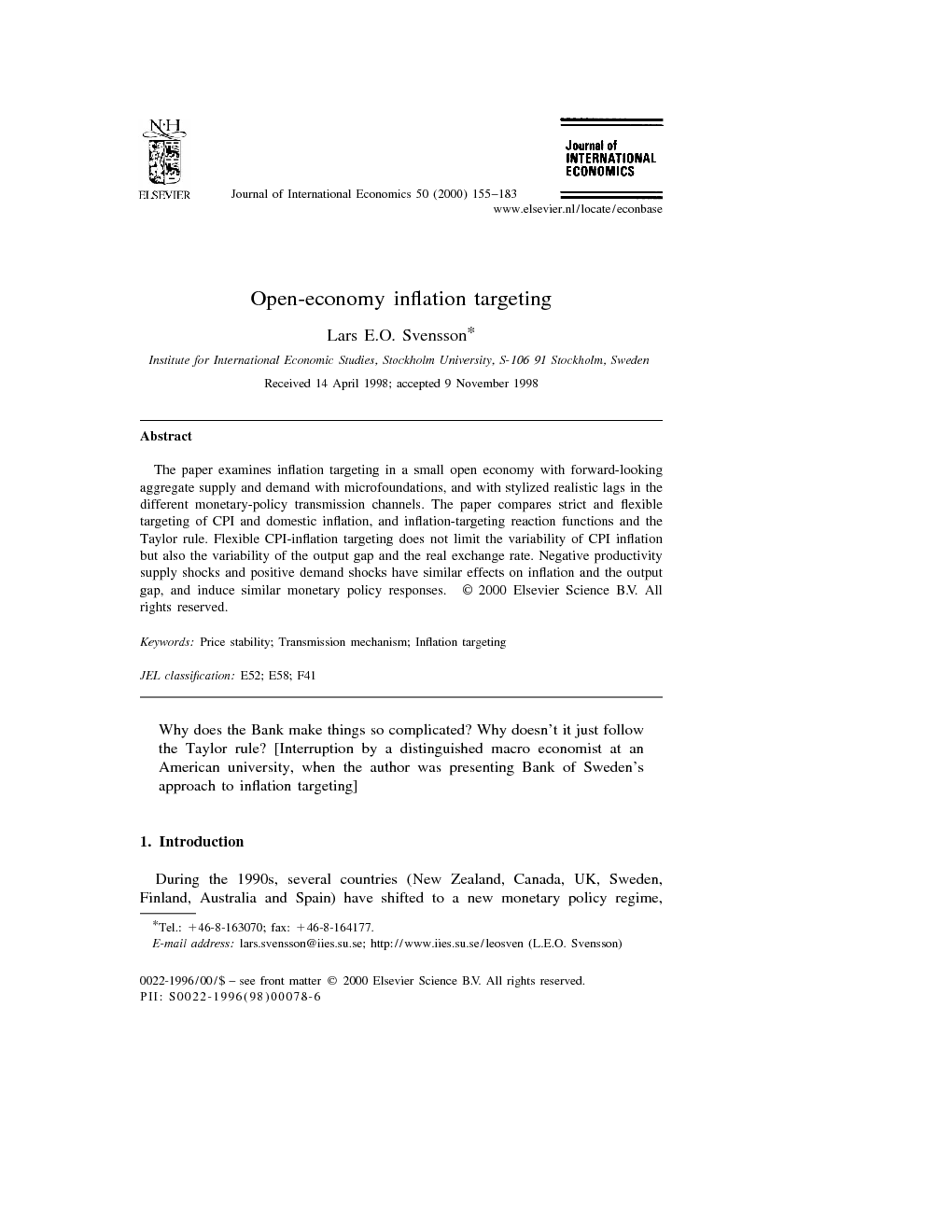 The paper examines inflation targeting in a small open economy with forward-looking aggregate supply and demand with microfoundations, and with stylized realistic lags in the different monetary-policy transmission channels. The paper compares strict and flexible targeting of CPI and domestic inflation, and inflation-targeting reaction functions and the Taylor rule. Flexible CPI-inflation targeting does not limit the variability of CPI inflation but also the variability of the output gap and the real exchange rate. Negative productivity supply shocks and positive demand shocks have similar effects on inflation and the output gap, and induce similar monetary policy responses.

I have presented a relatively simple model of a small open economy, with some microfoundations, and with stylized, reasonably realistic relative lags for the different channels for the transmission of monetary policy: The direct exchange rate channel to the CPI has the shortest lag (for simplicity set to a zero lag), the aggregate demand channel's effect on the output gap has an intermediate lag (set to one period), and the aggregate demand and expectations channels on domestic inflation have the longest lag (set to two periods). Within this model, I have examined the properties of strict vs flexible inflation targeting, and domestic vs CPI-inflation targeting, especially relating them to the properties of the Taylor rule. This examination shows that flexible inflation targeting, effectively compared to strict inflation targeting, induces less variability in variables other than inflation, by effectively targeting inflation at a longer horizon. Especially, strict CPI-inflation targeting involves using the direct exchange rate channel to stabilize CPI inflation at a short horizon, which induces considerable real exchange rate variability. In contrast, flexible CPI-inflation targeting, compared to both strict CPI-inflation targeting and flexible domestic-inflation targeting, results in considerable stabilization of the real exchange rate. In a situation with weight on stabilization of both inflation and real variables, CPI-inflation targeting appears as an attractive alternative. The implicit reaction functions arising under domestic-inflation and CPI-inflation targeting differ from the Taylor rule. CPI-inflation targeting deviates conspicuously from the Taylor rule, due to its implicit concern about real exchange rate depreciation. Such concern makes the response to foreign disturbances and variables important, whereas the Taylor rule excludes any direct response to these. Already in a closed economy, the Taylor rule uses only part of the information available; in an open economy it uses an even a smaller part. On the other hand, the Taylor rule does not result in exceptionally large variability in any variable, except possibly the real exchange rate; consequently it appears rather robust. The model I use distinguishes between demand and supply shocks. There are two kinds of supply shocks: cost-push shocks and productivity shocks. The response to a positive demand shock and a negative productivity shock are very similar (except that the response of the real exchange rate is more persistent for the latter). This similarity may appear surprising, given the conventional wisdom that supply shocks cause a conflict between inflation and output stabilization. There are several reasons for the similarity. First, both shocks increase the output gap, and the output gap is the major determinant of domestic inflation. Second, under flexible inflation targeting, the central bank wants to stabilize the variability of the output gap, rather than of output itself, as specified in the loss function I have used. For a productivity shock, there is little conflict between stabilizing the output gap and stabilizing output. For a supply shock, there is a considerable conflict between output-gap stabilization and output stabilization. Then there is little conflict between inflation stabilization and output-gap stabilization, but considerable conflict between inflation stabilization and output stabilization. Thus, since output-gap stabilization rather than output stabilization is one of the goals, there is little difference between positive demand and negative productivity shocks, except that the persistence of the shocks may be quite different. Instead, the conflict between inflation stabilization and output-gap stabilization arises for cost–push supply shocks, rather than for productivity supply shocks. 24 There are some obvious limitations to the analysis that may indicate suitable directions for future work. First, as emphasized above, there is no calibration and/or estimation of the parameters in the current version; the only criterion applied is that they must not be a priori unreasonable. As a consequence, the numerical results are only indicative. Second, although some microfoundations are provided for the aggregate supply and demand functions, as shown in Svensson (1998b), there is some arbitrariness in the assumptions of partial adjustment and the addition of disturbance terms. At the cost of introducing additional forward-looking variables, it is relatively straightforward to implement the ideas of polynomial costs of adjustment of Pesaran (1991) and Tinsley (1993). Also, only sticky prices have been explicitly modelled; with sticky wages, as noted by, for instance, Andersen (1997), the dynamics can be quite different. Third, the model is linear with a quadratic loss function. Nonnegative nominal interest rates is one source of nonlinearity, nonlinear Phillips curves is another. However, any nonlinearity would prevent the use of the convenient and powerful algorithm for the optimal linear regulator with forward-looking variables. Fourth, the particular relative lag structure I have used has been imposed on the model; there are obvious alternatives that may be worth pursuing.25 Fifth, the disturbances and the state variables are assumed to be observable to both the central bank and the private sector. In the real world, disturbances and the state variables are not directly observable, and the private sector and the central bank have to solve complicated signal-extraction problems. Some of the implications for inflation targeting of imperfectly observed states and disturbances are examined in Svensson and Woodford (2000). Sixth, there is no uncertainty in the model about the central bank's loss function and the inflation target is perfectly credible. Some new results on the consequences of imperfect credibility and less than full transparency of monetary policy are provided by Faust and Svensson (1997). Seventh, although it would be very desirable to test the model's predictions empirically, the short periods of inflation targeting in the relevant countries probably imply that several additional years of data are necessary for any serious empirical testing.