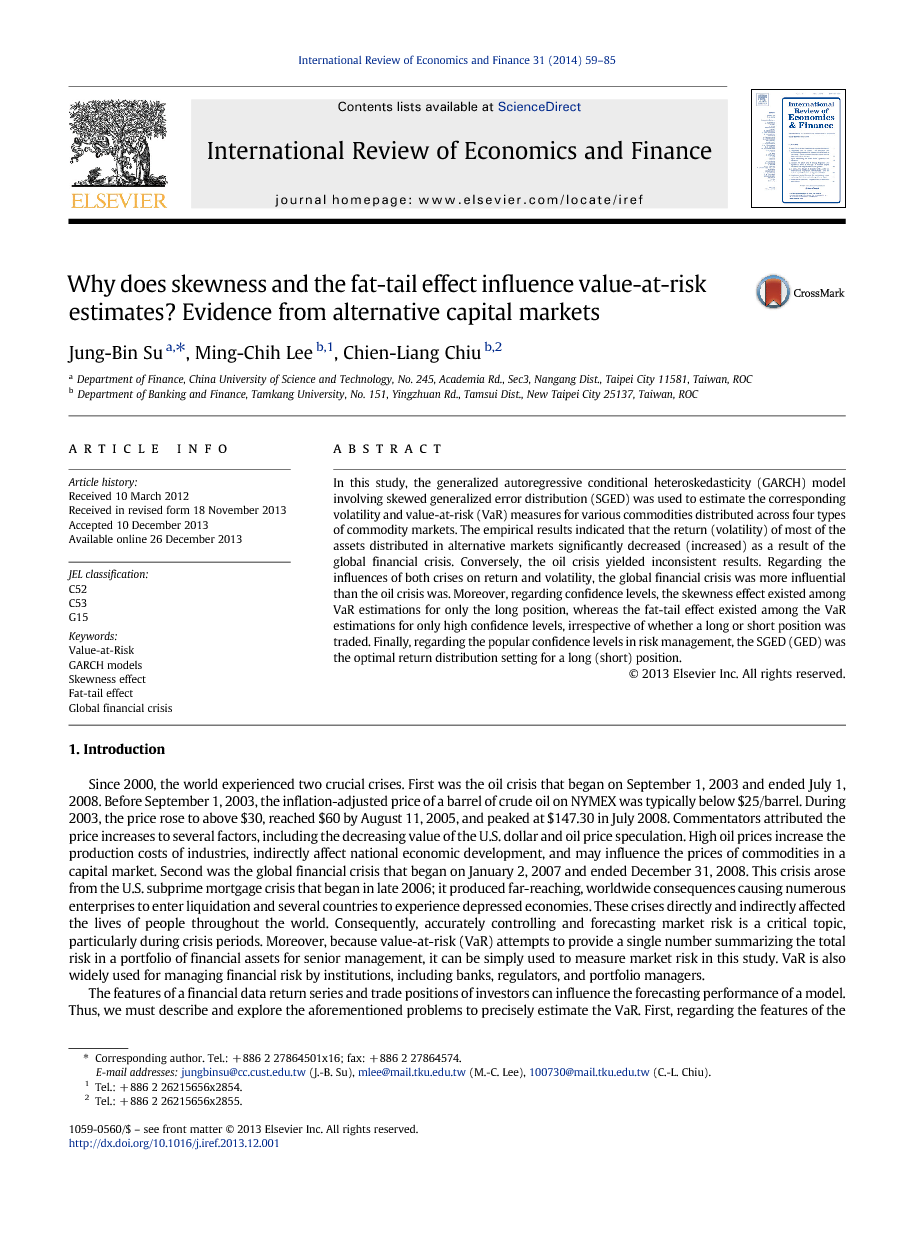 In this study, the generalized autoregressive conditional heteroskedasticity (GARCH) model involving skewed generalized error distribution (SGED) was used to estimate the corresponding volatility and value-at-risk (VaR) measures for various commodities distributed across four types of commodity markets. The empirical results indicated that the return (volatility) of most of the assets distributed in alternative markets significantly decreased (increased) as a result of the global financial crisis. Conversely, the oil crisis yielded inconsistent results. Regarding the influences of both crises on return and volatility, the global financial crisis was more influential than the oil crisis was. Moreover, regarding confidence levels, the skewness effect existed among VaR estimations for only the long position, whereas the fat-tail effect existed among the VaR estimations for only high confidence levels, irrespective of whether a long or short position was traded. Finally, regarding the popular confidence levels in risk management, the SGED (GED) was the optimal return distribution setting for a long (short) position.

This study used the GARCH (1,1) model with two asymmetric (SGED and SN) and two symmetric (GED and N) distributions to estimate the VaR for various commodities distributed across four types of markets, exploring whether the skewness and fat-tail effects of the return distribution existed in the VAR estimation by using accuracy assessments. The accuracy evaluation included unconditional coverage tests and two loss functions. Moreover, the study period comprised two major crises, the oil and the global financial crises; thus, dummy variables were included in the mean and variance equations of the surveyed model to investigate how these crises influenced mean and volatility estimates among alternative markets. The empirical findings can be summarized as follows. First, excluding both corn and wheat, which exhibited significantly positive skewness, most of the data were significantly negatively skewed. Second, the returns of most of the assets distributed in alternative markets significantly decreased as a result of the global financial crisis. Conversely, because of the oil crisis, the returns of most of the assets distributed in the metal and stock markets significantly increased, whereas that in both the energy and agriculture commodities markets exhibited a slightly significant decrease. Third, the volatility of most assets distributed in alternative markets significantly increased during the global financial crisis. Moreover, because of the oil crisis, the volatility of most assets distributed in both the metal and energy markets significantly increased, whereas that in both the stock and agriculture commodities markets significantly decreased. Additionally, how extensively the crises influenced returns and volatility, the global financial crisis was more influential than was the oil crisis. Fourth, the skewness effect existed in the VaR estimation for the long position, but did not exist in the short position, indicating that for any given confidence level, a long trader should use asymmetric return settings, such as SN and SGED, to precisely forecast the VaR. The fat-tail effect existed in the VaR estimation for only high (i.e., 99% and 99.5%) confidence levels, irrespective of whether a long or short position was traded, implying that for high confidence levels, both long and short traders should use the fat-tailed return settings, such as GED, to precisely forecast the VaR. Finally, regarding the popular confidence levels (i.e., 95% and 99%) in risk management, the SGED (or GED) was the optimal return distribution setting for the long (or short) position. Based on the empirical results, the risks and losses caused by financial commodities were larger than were those caused by energy commodities, indicating that the authorities should establish a policy to appropriately regulate the sale of financial commodities and prevent this type of crisis from reoccurring. Moreover, a long (or short) trader should use the SGED (or GED) return setting to precisely forecast the VaR and evaluate the encountered risk and appropriately adjust investments of allocated assets. For example, if the risk exceeds tolerable levels, then investors should reduce the weight of the high risk commodity. Regarding the real investment process, investors can reduce the risk by constructing a portfolio. Therefore, the topic “how to estimate the portfolio VaR and what are the optimal weight combinations for the asset components of a portfolio?” can guide future research.