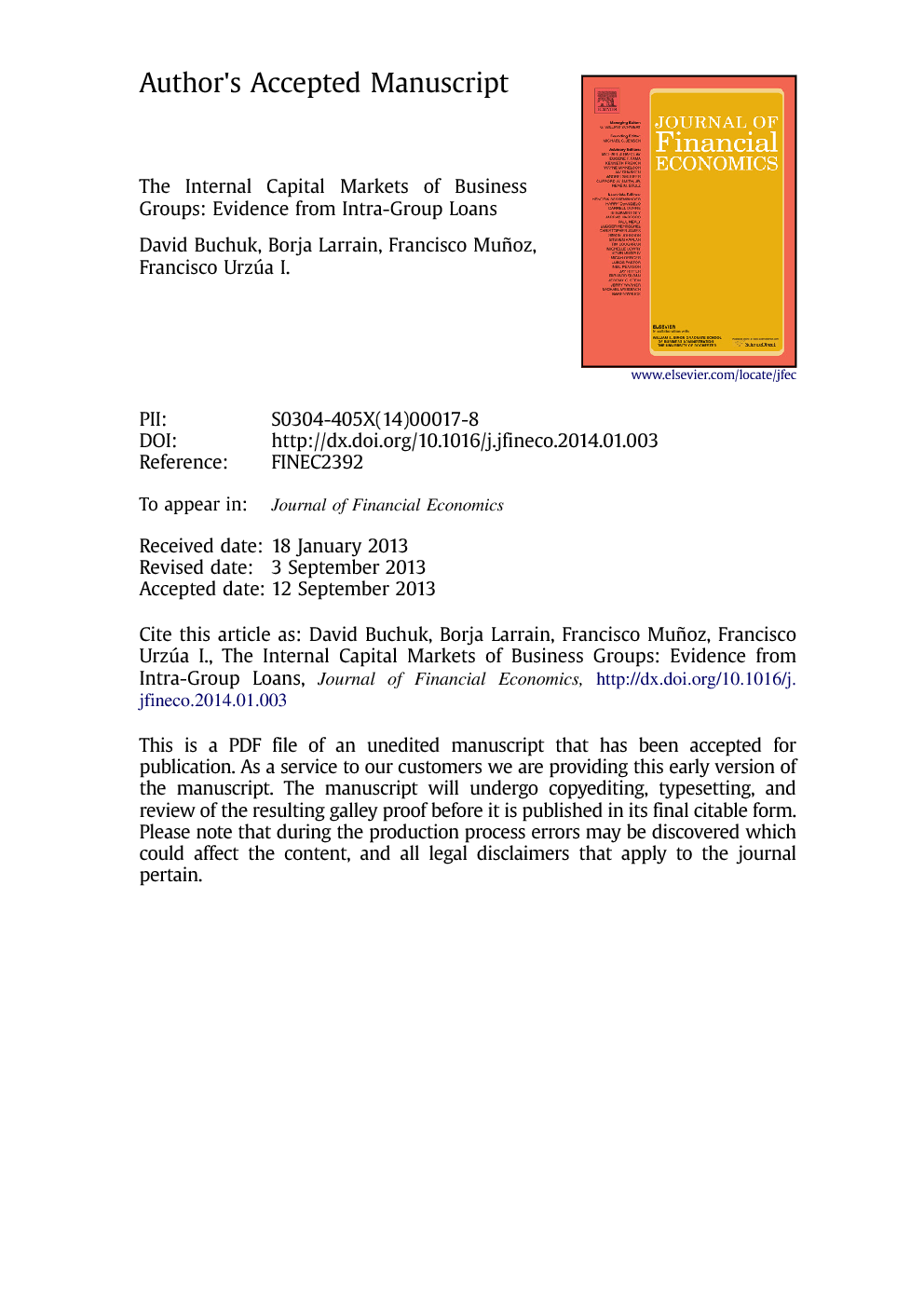 We study business groups’ internal capital markets using a unique data set on intra-group lending in Chile (1990–2009). In line with groups’ financing advantage, firms that borrow internally have higher investment, leverage, and return on equity (ROE) than other firms. At the margin, controlling shareholders have higher cash-flow rights in borrowing firms than in lending firms. However, there is no robust evidence of minority shareholders losing out from intra-group loans as tunneling predicts. Our evidence is consistent with the idea that strict regulation and disclosure requirements for intra-group loans, which are features of the Chilean market, reduce the risk of expropriation in pyramids.

We study business groups’ internal capital markets using a unique data set on intra-group lending in Chile between 1990 and 2009. Lending relationships are formed by firms that are close to each other in the control pyramid. Also, firms that belong to the same industry, and firms in more integrated industries, tend to form lending relationships. At the margin, firms in which controlling shareholders have high cash-flow rights receive more loans than other firms. However, loans do not typically go from the bottom of the control pyramid straight to the top of the pyramid, as tunneling suggests. Capital-intensive and small firms tend to receive more intra-group loans than other firms. The receivers of intra-group loans increase investment strongly, and to a lesser extent ROE and extraordinary dividends. Receivers are more levered than other firms, but have lower external leverage. On the other hand, there is little evidence that providers of intra-group loans behave differently than other firms except for the fact that they invest less and they have higher external leverage. Overall, this evidence is consistent with the financing advantage hypothesis, but less so with tunneling. The key missing link in favor of tunneling is a clear sign of underperformance in firms that provide internal loans. In other words, there is no conclusive evidence that the controlling shareholder hurts minority shareholders of the lending firm by directing intra-group loans to firms in which he has high cash-flow rights. The interpretation under the financing advantage hypothesis is that business groups allow firms to increase their debt levels beyond the levels permitted by financial markets. Subject to less stringent financial constraints, these firms can invest more and increase ROE and dividends. The Chilean regulation of intra-group loans is stronger than in other emerging markets such as China or India. Therefore, our results are consistent with the idea that better regulation can reduce the risk of expropriation in the internal capital markets of pyramids without canceling their financing benefits.