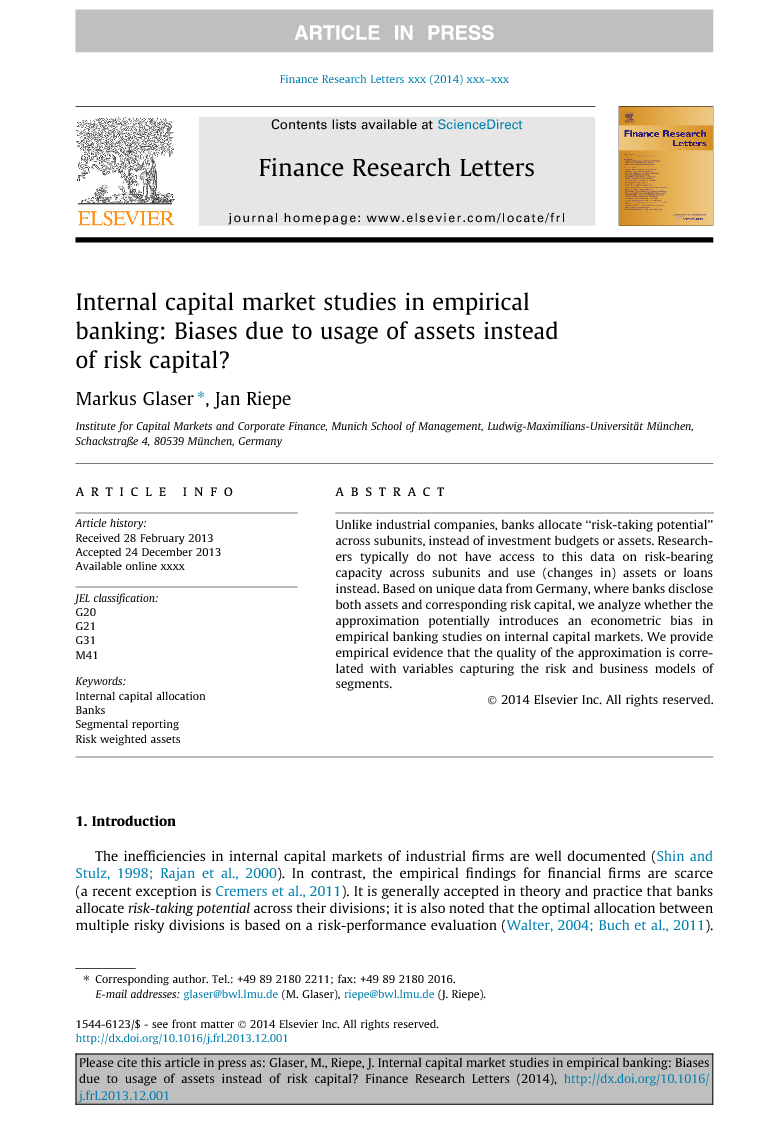 Unlike industrial companies, banks allocate “risk-taking potential” across subunits, instead of investment budgets or assets. Researchers typically do not have access to this data on risk-bearing capacity across subunits and use (changes in) assets or loans instead. Based on unique data from Germany, where banks disclose both assets and corresponding risk capital, we analyze whether the approximation potentially introduces an econometric bias in empirical banking studies on internal capital markets. We provide empirical evidence that the quality of the approximation is correlated with variables capturing the risk and business models of segments.

The inefficiencies in internal capital markets of industrial firms are well documented (Shin and Stulz, 1998 and Rajan et al., 2000). In contrast, the empirical findings for financial firms are scarce (a recent exception is Cremers et al., 2011). It is generally accepted in theory and practice that banks allocate risk-taking potential across their divisions; it is also noted that the optimal allocation between multiple risky divisions is based on a risk-performance evaluation ( Walter, 2004 and Buch et al., 2011). Nevertheless, the empirical studies on internal capital allocation in banks usually have to rely on the allocation of assets and loans, as the risk allocation is not disclosed ( Cremers et al., 2011). This approximation might distort results of empirical studies for banks with heterogeneous risk profiles of their divisions. The internal resource allocation to more risky divisions gets systematically underestimated when using assets while less risky divisions appear more successful in the acquisition of internal resources. Additionally, for banks with a heterogeneous risk profile of their divisions, individual risk preferences might induce managers to self-select into one division or another, which biases empirical evidence on power struggles in internal capital markets. While Cremers et al. (2011) rely on the nominal voting power to document internal power struggles, other studies use managerial network analyses ( Glaser et al., 2013 and Duchin and Sosyura, 2013). Potential drivers of this self-selection are the amount of segment specific human capital, career concerns of managers which may lead to a self-selection into less risky divisions, and the amount of variable-pay, which increases managers’ risk appetite. Consider the following specific example in which a researcher is interested in understanding the internal allocation in banks and focuses on the explanations of managerial power. This line of reasoning suggests internal lobbying or influence activities of lower level managers towards top management as drivers of internal allocations (Cremers et al., 2011). In reference to internal capital markets in industrial firms (Glaser et al., 2013 and Duchin and Sosyura, 2013), a researcher might hypothesize that the CEO of a bank favors one subunit (A) compared to another subunit (B) because of a personal or social connection between the CEO and a subunit CEO. The researcher may observe the assets of the equally profitable subunits (that may or may not be subject to different levels of business risk). The resulting share of assets is 50/50, so the assets in both subunits are equally large. In this case, the researcher cannot confirm the hypothesis. However, banks do not allocate assets or loan volumes, but the potential to engage in risk (“risk-taking potential”; “risk-bearing capacity”, see Deutsche Bundesbank, 2007). This alternative variable represents the true allocation in banks. Assume that it is distributed in a way that 60 percent of these risk adjusted assets go to subunit A and the remaining 40 percent to subunit B. If the CEO has connections to the CEO of subunit A, then the researcher’s hypothesis is indeed true but will remain undetected due to a lack of precise data. In our paper, we focus on this problem and analyze the correlation between the two variables that were previously mentioned—namely assets and risk weighted assets (RWAs). Our research question asks whether these variables are related to each other. Furthermore, we are interested in the magnitude of their potential relation. By using a unique setting in Germany from 2004 to 2011, we explore whether this limitation has the potential to produce biased results when assets, instead of RWAs, are used. We find a large difference in the allocation of both measures. For the average (median) segment, the difference between a segment’s share of RWAs and its share of total assets accounts for 11.7 (6.3) percentage points. With the average (median) segment reporting a share of total assets of 20 percent (14 percent), such a difference seems economically highly relevant. We find no empirical evidence that the difference is influenced by capital market or regulatory pressure. While considering the source of the differences, we document a heavy influence of a segment’s business activity on the quality of this approximation. We conclude that the studies using assets, instead of risk assets, as (noisy) dependent or independent proxy variable may be subject to omitted variable biases, when particular business unit activities are not controlled.

The empirical studies of internal capital market in banking focus on understanding the allocation between multiple risky divisions. However, the studies rely on assets as a potentially noisy proxy for risk capital. By comparing asset allocation with risk weighted allocation, we show that both variables are positively correlated in a highly significant way but that this relation is noisy. We do not find empirical evidence for the influence of external corporate governance on the noisiness of this relation. Nevertheless, depending on the segment’s business activity, the use of assets instead of RWAs will overstate or understate the true underlying allocation. Therefore, we recommend controlling for the riskiness or the business activity of subunits. This can help to avoid biased parameter estimates due to measurement errors and omitted variable bias in a regression analysis.