عنوان انگلیسی
How close a relationship does a capital market have with other markets? A reexamination based on the equal variance test ☆
دانلود فوری مقاله + سفارش ترجمه 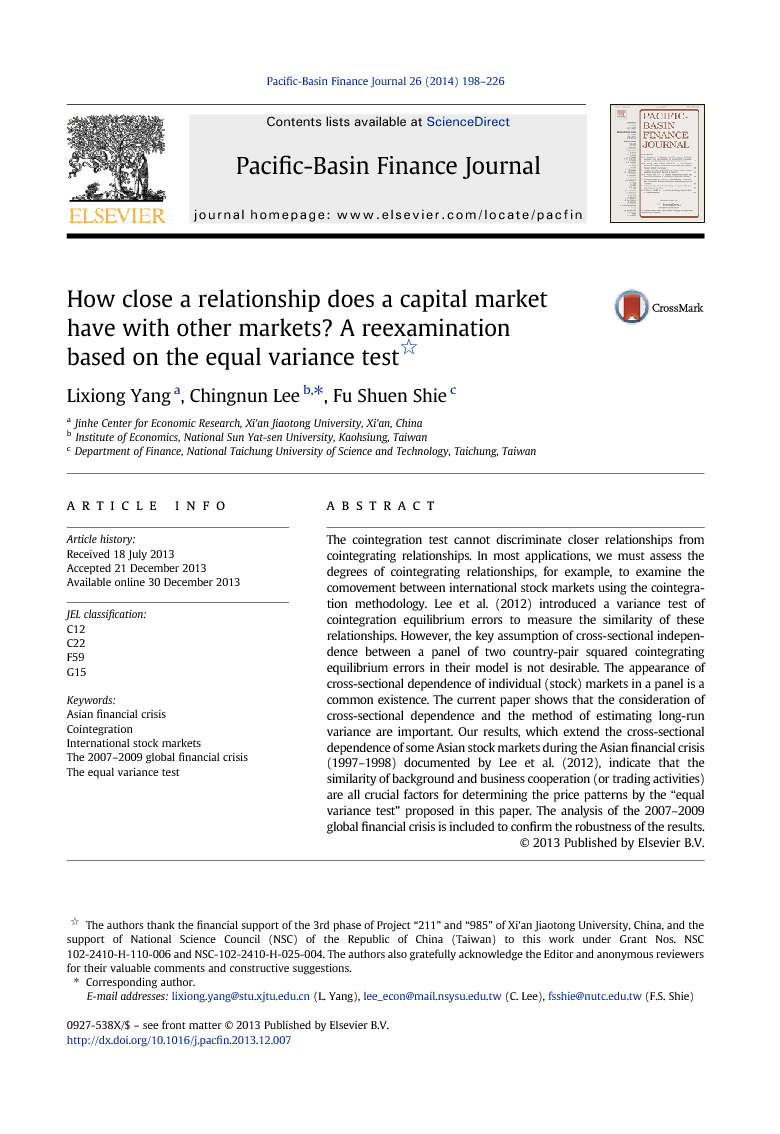 The cointegration test cannot discriminate closer relationships from cointegrating relationships. In most applications, we must assess the degrees of cointegrating relationships, for example, to examine the comovement between international stock markets using the cointegration methodology. Lee et al. (2012) introduced a variance test of cointegration equilibrium errors to measure the similarity of these relationships. However, the key assumption of cross-sectional independence between a panel of two country-pair squared cointegrating equilibrium errors in their model is not desirable. The appearance of cross-sectional dependence of individual (stock) markets in a panel is a common existence. The current paper shows that the consideration of cross-sectional dependence and the method of estimating long-run variance are important. Our results, which extend the cross-sectional dependence of some Asian stock markets during the Asian financial crisis (1997–1998) documented by Lee et al. (2012), indicate that the similarity of background and business cooperation (or trading activities) are all crucial factors for determining the price patterns by the “equal variance test” proposed in this paper. The analysis of the 2007–2009 global financial crisis is included to confirm the robustness of the results.

To improve the knowledge of the level of cointegration relationship, this paper introduces a new generalized test that is based on the test proposed by Lee et al. (2012). The absence of this ability to answer how the level of comovement is for the traditional cointegration analysis including Engle–Granger procedure and Johansen and Juselius approach shows the importance of the variance tests. The ability to assess the closeness of the cointegrating relationships makes the variance tests relevant to applying to various issues, such as constructing portfolios among international stock markets. By allowing cross-sectional dependence between the squared cointegrating equilibrium errors, the proposed variance test provides further insights into the power of a hypothesis test, and is more adequate for the real-world analysis of the cointegration relationship than that in Lee et al. (2012). We extend the variance test of Lee et al. (2012) and re-examine empirical tests of the price linkages and the degree of comovement between Taiwan and other countries in the event of the 1997 Asian financial crisis. One important feature of the proposed set-up is that it is robust to a variety of possible squared cointegrating equilibrium errors, such as GARCH(p,q). Another advantage of the proposed variance test is that it does not require an estimation of the variance, σm2, by employing the KVB approach. The results of this study show that the proposed test is more robust because it is asymptotically invariant to serial correlation/heteroscadasticity nuisance parameters in σm2. We also show that the consideration of plausible dependence between capital markets raises questions about the validity of inferences based on the test proposed by Lee et al. (2012), which may lead to different empirical results. Even though the data source, sample period, and sample countries used in this study are the same as those used by Lee et al. (2012), this study presents different results. We cannot find enough evidence to support the conclusion in Lee et al. (2012)that adjacent regions with similar backgrounds in terms of their capital markets will reflect price patterns. Our results are robust when we focus on the 2007–2009 financial crisis. In summary, the empirical results of this study find closer relationships between Taiwan and other markets (i.e., the Philippines, the United States, and Australia) during the 1997 Asian financial crisis. Combining the cointegration test with the proposed equal variance test, we conclude that the linkage among stock markets was strengthened after the Asian financial crisis. The leading role of the United States stock market in Taiwan is founded in this paper, and geographical ties cannot be rejected. The findings of this study favor that frequent business cooperation and trading activities may be crucial factors in international stock price patterns. Future studies an employ our methodology to examine the degree of economic integration or convergence between developed and developing economies, or to assess the performance of mutual funds relative to a reference index.