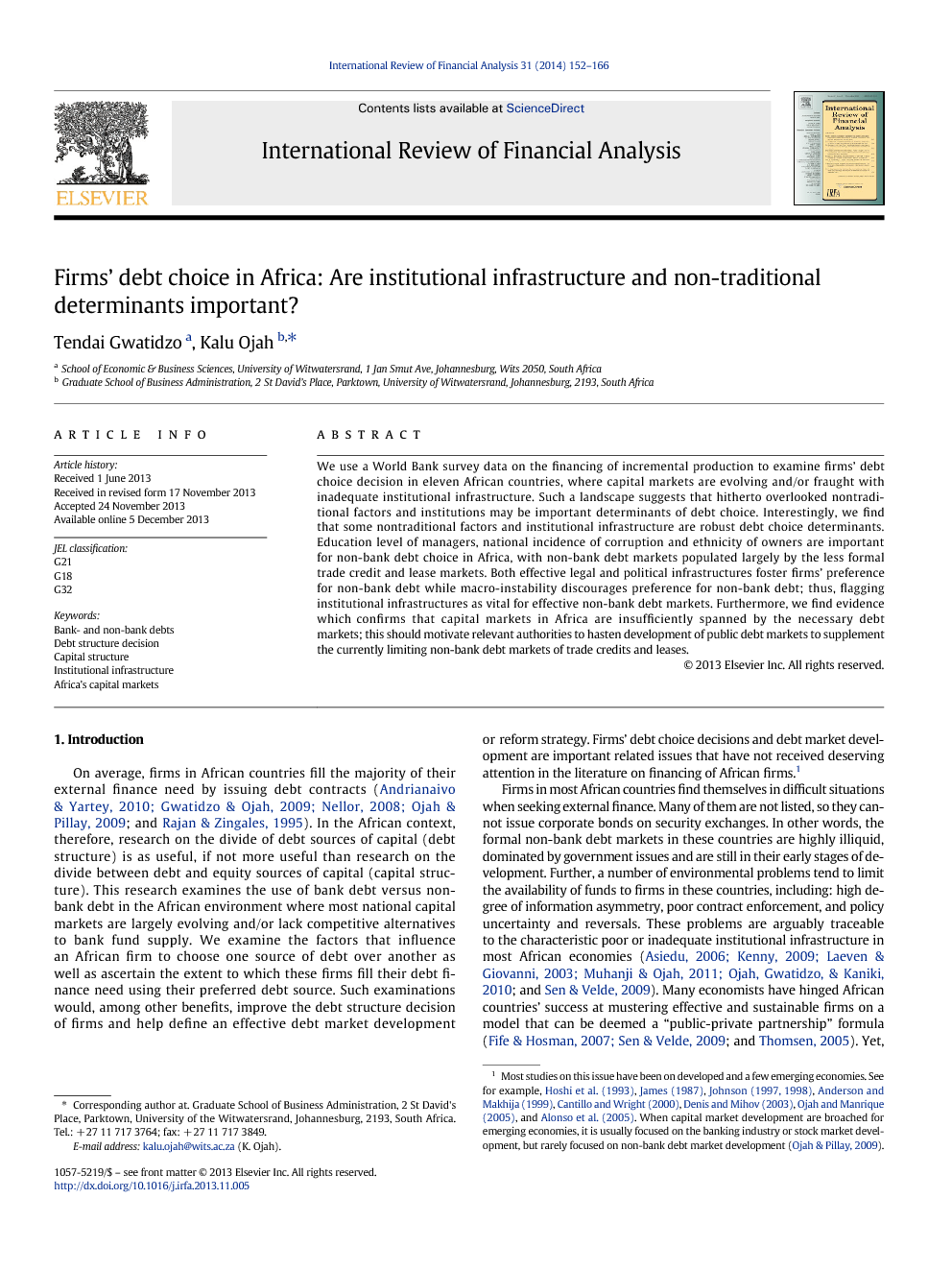 We have examined the factors that influence a firm to choose one source of debt over another as well as ascertain whether the same debt choice determinants also influence the amount of that specific debt the firm uses to finance incremental production. Among other benefits, outcomes of these examinations help improve the debt structure decision of firms, provide guidance on financial product design and development, and help governments to structure an effective debt market development or reform strategy. The analyses here were conducted around three identifiable groups of debt choice decision factors: orthodox, institutional and heterodox factors, with the last group of factors being the key innovation of this study. Heterodox factors are particularly important for a capital market landscape such as Africa, where these factors, hitherto, have not received this kind of debt choice research attention. In general, three heterodox variables–education level of firm managers, ethnicity of firm owners and incidence of corruption in a country–influence firms not to consider debt funds favorably, with firms run by highly educated managers not liking non-bank debts, perhaps because of the forms non-bank debts take in Africa’s capital markets–i.e., in the forms of trade credits and leases, which are contract types that are not competitive against bank debts in terms of size and maturity structure. Further our result appears to support previous anecdotal and preliminary empirical evidence of discrimination, in credit markets, against firms owned by Africans. Among institutional factors, macroeconomic instability discourages preference for non-bank debt while both effective legal and political environments, in general, foster firms’ preference for non-bank debt. This finding on institutional infrastructure suggests that national authorities which develop financial markets in Africa should provide requisite institutional infrastructures concurrently. Importantly, several of the same set of relevant determinants influence debt choice and debt demand decisions differently; thus, suggesting that debt markets in these countries are not sufficiently spanned as to enable firms access debt finance by using their preferred debt contract types. In fact, determinants of demand for debt suggest that factors which proxy mitigation of information asymmetry, and thus imply less monitoring cost to lenders, are relevant for accessing debt finance in general and bank debt, in particular. This set of findings suggests that financial services firms and governments in Africa need to increase product design and development, strengthen the efficacy of existing private debt markets, and especially hasten the development of public debt markets to complement the limiting non-bank debt markets that are currently populated by trade credits and leases.