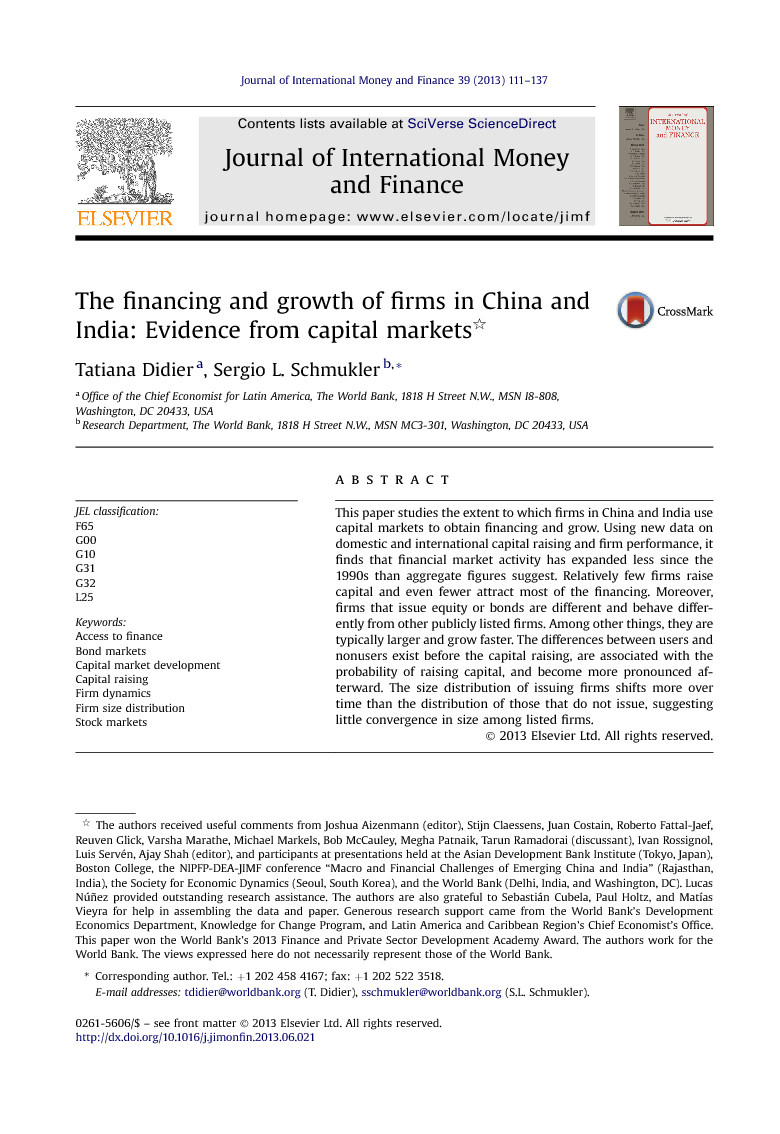 This paper studies the extent to which firms in China and India use capital markets to obtain financing and grow. Using new data on domestic and international capital raising and firm performance, it finds that financial market activity has expanded less since the 1990s than aggregate figures suggest. Relatively few firms raise capital and even fewer attract most of the financing. Moreover, firms that issue equity or bonds are different and behave differently from other publicly listed firms. Among other things, they are typically larger and grow faster. The differences between users and nonusers exist before the capital raising, are associated with the probability of raising capital, and become more pronounced afterward. The size distribution of issuing firms shifts more over time than the distribution of those that do not issue, suggesting little convergence in size among listed firms.

This paper offers new evidence on how much of the expansion in capital markets in China and India has reached different types of firms and to what extent access to these markets has been related to firm performance. The findings suggest that the expansion of financial activity has been much more limited than aggregate numbers on capital market development suggest. In particular, capital market financing has been channeled to relatively few firms and markets have remained highly concentrated, with a small share of firms capturing the bulk of equity and bond financing, domestically and abroad. In other words, capital markets have not been a significant source of financing across listed firms. For the firms that do raise capital in these markets, this funding seems related to firm dynamics. Not only do certain types of firms use capital market financing, but their attributes also become more distinct after raising capital. For example, large firms are the main ones that raise equity and bond capital. Moreover, they grow faster in the years before and during raising capital and become even larger than the control group in the year after, increasing—among other things—their capital expenditures. Furthermore, the firm size distribution shifts more over time for firms that raise capital than for those that do not, suggesting little convergence in size across listed firms. While nonissuing firms grow on average at a rate similar to that of the overall economy, issuing firms grow much faster. The evidence in this paper indicates that financing matters for firms. Even though financial markets in China and India are not yet fully developed, firms that can raise capital seem to benefit from it, particularly in terms of their expansion. In other words, at least part of the high growth in these countries seems to come from the firms able to raise new funds. Nonetheless, even large firms appear somewhat financially constrained. The differentiated performance of users and nonusers of capital market financing suggests that for publicly listed firms, performance is sensitive to the external capital raised. That firms perform differently when they raise capital also suggests that they had ex ante investment opportunities that they could not realize. But testing for the presence of financial constraints requires much more work. Though this paper has shown that capital raising activity is related to firm dynamics, it does not analyze the extent to which these effects are driven by the supply side (capital market side) or the demand side (firm side). It is possible that firms have growth opportunities and simply raise capital in equity and bond markets when they need it—as suggested by the fact that firms grow more rapidly just before raising capital. And some firms might have business opportunities that propel their growth, leading them to seek more capital to sustain new investments. But supply-side effects might also be at work, as fluctuations in financial activity typically have real effects. For example, shocks to global mutual funds seem to affect investment growth rates in China and India (Jotikasthira et al., 2012). Moreover, frictions in the financial system might affect which firms obtain financing, restricting access to capital markets to a few firms (Didier et al., 2013). More work is needed to understand how financial intermediaries affect access to capital markets, because most existing studies focus on banks. Government rules and regulations on domestic and foreign transactions in capital markets (including capital controls) have likely played a role in capital raising activity. In particular, restrictions on companies to issue equity and bonds and for domestic and foreign residents to invest in them might have undermined equity and bond issues in China and bond issues in India. India's equity markets were less affected because they operated more freely in the period analyzed here. Moreover, these restrictions have been relaxed over time. Furthermore, these restrictions are less likely to have affected firm dynamics or their size distribution. But more research is needed in this area. The findings in this paper also have implications for discussions on capital market development and access to finance for corporations. In recent decades many emerging economies have undertaken major efforts to expand the scope and depth of their capital markets and to liberalize their financial sectors to increase the provision of financial services. Moreover, many economists have predicted big changes as China and India further liberalize and develop their financial markets. While these developments will bring important changes, the findings here might help put in perspective their possible effects. Expanding capital markets will tend to directly benefit the largest firms (among already large publicly listed firms). More widespread direct effects might be harder to identify. Furthermore, indirect effects on smaller firms still need to be understood and quantified. For the broader set of emerging economies, the findings here suggest that even in fast-growing China and India, with plenty of growth opportunities, receiving large inflows of foreign capital, and with thousands of firms listed in their stock markets, few firms have engaged in capital market activity. This could suggest that it will be difficult for a broad set of firms from smaller and slower-growing countries to benefit from capital market development. But more work is needed to develop a good benchmark of the number of firms that should receive capital market financing.